David Yazbek has been one of the less publicized composer/lyricists from the generation of writers who followed those who wrote musicals in the “Golden Age” of Broadway. Yazbek has earned nominations for a Tony Award three times, for The Full Monty, Dirty Rotten Scoundrels, and Women on the Verge of a Nervous Breakdown. He’s also had three nominations for Grammy Awards.

Now he’s back on Broadway with his finest work to date — he’s written a score that has tremendous variety, melody, wit, and just plain intelligence. It’s also very entertaining and takes us to far-away Israel where a very tacky band of half-a-dozen musicians finds itself in the wrong town. They are stuck there because theirs was the last bus of the day and they must wait until the next one comes along. The town they land in is Bet Hatikva; The one they were meant to visit is Peta Tikva. As Egyptians who speak virtually no Hebrew, the error totally confuses them, and their discussions with their unwilling hosts in the wrong town entertain us. Language is limited to broken English but book writer Itamar Moses has worked miracles to find tenderness, wit, and wisdom even with his limited tools.

Tony Shalhoub is the leader of the band, and he and his players have been invited to play at a celebration at an Arabic Cultural Center in Peta Tikva. This warm-hearted musical follows their overnight stay with people from a very different culture who learn much about how we should be behaving in this presently unfriendly world. The most prominent Jewish character in the group that meets them is a force called Dina, the manager of a very small coffee shop. She’s beautifully performed by Katrina Lenk, a slinky sultry singer/actress who brought to mind the languid approach of Lauren Bacall and Marlene Dietrich, both of whom appeared in musicals now and then, though neither would properly be called “a singer.”

Ms. Lenk is a gifted actress who sings most effectively in a scratchy, smokey way as the no-nonsense voice of a small group of Israelis. She was last seen effectively in Indecent, has star quality and Dina is a role that will ensure a bright future for her. In the course of the one night they spend together, she forms a brief liaison with Mr. Shalhoub’s “Tewfiq”, the leader of the band, and though it’s not a match made in heaven, she is positively luminous as she describes her feelings in a haunting tune: “Something Different.” Different indeed, it radiates emotion and is something rare in a musical nowadays — it’s haunting and memorable. The number also gives Mr. Shalhoub a moment to shine.

Others in the band are offered shelter for the night, and all are given musical material to tell the story of their particular experience. Mr. Yazbek’s music has the flavor of the Middle East, and his accompanying lyrics further support the story and the various characterizations. Songs like “Welcome to Nowhere,” “Itzik’s Lullaby,” “Something Different,” and “Haled’s Song About Love,” all impart information and seasoning to the story.

At the end of the evening, after the bows, the small band played a rousing sampling of the concert they got to play when they finally arrived at the proper town of Petah Tikvah. With a tambourine bouncing, a drum beaten by fingers to bring excitement, two clarinets, a mandolin, and a cello producing beautiful music under Tony Shalhoub’s commanding baton, the audience was on its feet in an instant, and I do believe you will be too. A new work; original, inventive, emotionally sound, and simply but effectively written and staged. It offers hope to our troubled world. It’s small, without grandeur, and takes its place alongside this season’s Dear Evan Hansen and Come From Away a third nourishing evening which combines mirth, melody, and even substance, a welcome collaboration that continues to feed the current season on Broadway. 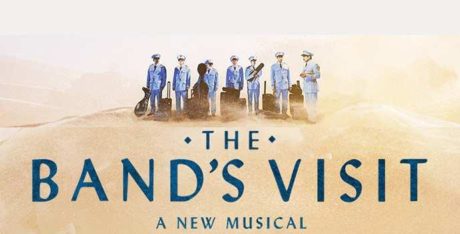