I have a perpetual soft spot for Crazy for You, which was the first show I ever saw on Broadway. What with George and Ira Gershwin songs, Tony-winning choreography by Susan Stroman, and the wonderful loopy energy of Ken Ludwig’s book, a theater-mad teenage girl couldn’t have asked for a better introduction to the Great White Way.

Signature Theatre’s new production of Crazy for You brings with it the warm heart and high spirits of the original. Denis Jones has re-choreographed the show to fit the Signature space, and he and director Matthew Gardiner cleverly utilize every inch of that space, with the action often spilling uproariously into the aisles.

The show’s plot is a loving throwback to the feather-light musical plots of the 1920s and ’30s, grabbing every opportunity to break out into a high-octane tap number. Ludwig throws every trick in the book at us, from vaudeville-era jokes to intense physical comedy to mistaken identity to running gags to a let’s-put-on-a-show-and-save-our-theater storyline (Mickey Rooney even gets a shoutout!). Gardiner’s talented cast handles it all with aplomb.

Danny Gardner plays Bobby Child, a bored banker who really just wants to dance. He spends most of his time hanging out with the chorus girls from “Zangler’s Follies,” a Ziegfeld-like revue, and trying unsuccessfully to audition for Zangler himself (Bobby Smith). When sent to foreclose on a theater in Nevada, Bobby meets his match in an iron-willed Westerner, Polly Baker, played by Ashley Spencer. The two of them bring powerhouse voices and loads of charm to their respective roles, and they handle Jones’ choreography beautifully, especially in the duet “Shall We Dance,” an acting as well as a dancing tour de force for both.

In fact, one of the best things about the cast as a whole is their expressiveness throughout every dance number (and as I mentioned, there are a lot of dance numbers!). Their faces are as active as their bodies; in the clichéd but still meaningful phrase, they’re telling a story with their dancing.

The Follies girls, in particular, know how to use dance to build character and advance the plot, as in the number “Slap that Bass,” where they gamely teach a bunch of Nevada drifters to dance. These women are too numerous to name here, but they nonetheless deserve credit for being able to establish distinct characters while working seamlessly as a group. A couple of them do get subplots of their own, and make the most of them; Maria Rizzo was delightful as no-nonsense dance director Tess, and Colleen Hayes’ ditzy chorine Patsy was clearly an audience favorite. Other standouts included the reliably great Sherri L. Edelen as Bobby’s imperious mother, and Bobby Smith as the more-hapless-than-imperious Zangler. Harry A. Winter had some fine, touching moments as Polly’s father, Everett, bringing a little wistful realism to the otherwise fizzy proceedings.

The orchestra handled Gershwin’s music with gusto under the direction of Jon Kalbfleisch. Paul Tate dePoo III’s set shifted easily and effectively between city and desert, with help from Jason Lyons’ lighting. Tristan Raines’ costumes and Leah Loukas’ wigs gorgeously evoked the fashions of the ’30s, when showgirls and society ladies still got to look glamorous despite the Depression. In fact, there was nothing remotely depressing about this joyous production. With its sweet sincerity as well as its music, dancing, and jokes, it’s guaranteed to lift the spirit. 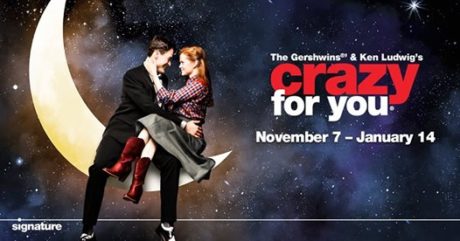