Make no mistake, St Nicholas at Quotidian Theatre Company is not a Christmas play. Conor McPherson’s one-man-show starring Steve Beall and directed by Jack Sbarbori is a Gothic meditation on power, beauty, and vampires. Yes, vampires.

Are the vampires in this tale real, or are they an invention of a desperate man in search of redemption? That’s the driving question of this dark-and-stormy-night tale told by a washed up, morally bankrupt theater critic from Dublin whose joy in life comes from the power he feels over the subjects of his criticism. He delights in the fear in the eyes of the actors and directors at the pub after performances and relishes letting them know how little regard he has for them as people. His personal life is equally sad: an alcoholic with no love left for his wife, a befuddled detachment from his son, and a love for his daughter he can’t bring himself to express. During the first half of the play, we get to know this man and learn that, though he is crude and a drunk and a bit rotten on the inside, he is charming as hell.

The storyteller is Irish, and he certainly has the gift of the Blarney, leaving us hanging on every word. Steve Beall is the embodiment of the power the storyteller can’t seem to stop thinking about. He reels you in with bravado and humor and then lays you flat with brutality. But there is a vulnerability and insecurity at the center of his portrayal that portends his ruinous obsession with a young actress. Beall conveys the powerlessness the man feels in the presence of her un-selfconscious beauty as well as the array of emotions it brings out in him, from impotent worship to terrifying anger and violence.

McPherson’s script is the sort of script you immediately want to go home and read, to linger over with pencil in hand, for the wealth of truisms about life and art and beauty. That sort of writing powering a compelling plot in the hands of a skilled performer like Beall is a formula to keep the audience rapt for the (considerable) length of the play.

In a production with a single actor and nothing for a set but a Victorian sitting room, a director might be tempted to throw in visual bells and whistles or stylistic flourishes, but not here. Thankfully, Director Jack Sbarbori lets Beall run with the story, telling the tale with fluid grace, emotional intensity, and the dark edges any vampire story requires.

Oh, yes. The vampires. That’s the second half of the show. The man’s charm and magnetism, despite, or in addition to, his moral flaws, make him the perfect person to serve as a party promoter and victim hunter for a suburban vampire group house. The storyteller’s days and nights with the vampires tease us along a dark path, one step at a time, learning what the storyteller believes makes them inhuman, or at least what makes us more human than these immortal creatures. It’s a real punch in the philosophical gut. It was with these thoughts I left the theater, regretfully abandoning my plans to hunt down Steve Beall and Jack Sbarbori and glare at them over a pint from across the room. Critics are all alike.

Running Time: 2 hours and 10 minutes, with one intermission. 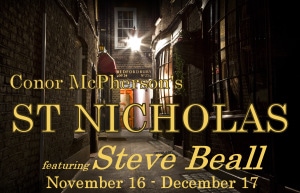