Shakespeare Theatre Company has set Twelfth Night inside of an airport lounge, and why shouldn’t they, it is their production, not ours, and Lee Savage’s design is a marvel of verisimilitude, so it seems unfair to ask questions. Many things happen in airports; why not this. The director’s note in the program suggests something about the metaphor of air travel and how the Sydney Harman Hall already sort of looks like an international departure lounge, so it is of a piece with an artistic ethos. Sometimes, but only sometimes, it is an international departure lounge. Other times it’s the coast of Illyria, where Twelfth Night is set, or Duke Orsino’s home, or Olivia’s. I mean, it remains always an airport lounge so one must be aware of who lives where so that when those different sets of whos take the stage you remember where you are. At other points, we are less sure where the action takes place.

Shakespeare’s Twelfth Night is one of his holiday plays — like A Midsummer Night’s Dream or Julius Caesar — that reminds us how beer replaced water for most of the 17th century. Twins Viola (Antoinette Robinson) and Sebastian (Paul Deo, Jr.) have been separated by disaster, a plane crash this go-round, and each make their way through a country not their own, Illyria, where Duke Orsino (Bhavesh Patel) is attempting to woo a grieving woman, Olivia (Hannah Yelland). Viola, hoping to make the best of it, disguises herself as a boy, fooling everyone, including, eventually, her brother, who, by the way, no one at all can tell apart from his sister when she is wearing pants. One can pay too much attention to the wrong thing and find oneself adrift, away from the play, and some of its gems. And yet.

(Twins are a favorite contrivance of Shakespeare’s, as is gender-bending and sending a character away and bringing him back disguised as someone else. One wonders if it was just rude to look at faces in the 1600s.)

Watching the plot kink and dart its way from fraught beginning to frantic middle to an unexpectedly affecting and jarring end is the joy of any production of Twelfth Night, and this production is no different. Director Ethan McSweeny has assembled a talented cast of Shakespeareans, who bring the language to life in accessible and surprising ways. Of special note are Heath Saunders’s Feste and Heath Saunders’s voice, of which I could have spent all night listening to and felt it time well-invested. He sings several songs, some new to the production, and written by Lindsay Jones; some proffered by Shakespeare, like “I Am Gone, Sir,” and “O Mistress Mine;” and all are wonderful and we are the better for hearing him. Emily Townley as Maria, Olivia’s gentlewoman, is earthy in the way all Shakespeare’s nurse characters are earthy, and she wraps the lines around her finger as easily as she wraps Sir Toby Belch (Andrew Weems) into a matrimonial knot by play’s end. Weems, Jim Lichtscheidl (as Sir Andrew Aguecheek), and a delightful child actor, Koral Kent, as Fabian, are the play’s energy: without them we’re left with a will-they/won’t-they about too many characters with their too cryptic longings, and romantic entanglements are never as interesting as two drunks with a plan.

(One moment, in particular, illustrates this. Sir Andrew Aguecheek is offstage, but visible, incompetently practicing his fencing, in order to stage a duel. He completely pulls focus from the conversation between the disguised Viola and Sir Toby Belch, and we’re glad of it, because Viola, as a character, will never be as interesting as what Shakespeare does with his clowns. Dickens will have this same problem over 200 years later: the romantic couples are almost only romantic, with some exceptions, while the clowns are always the world. It’s a limitation of scope.)

I do want to spend some time, though, on Derek Smith’s Malvolio, in this separate paragraph, away from the noise that came before it. In Shakespeare’s play, Malvolio is an ass, a priggish steward who esteems himself too highly and tramples the ribaldry of Sir Toby Belch and Sir Andrew Aguecheek. Played one way, he is little more than an uptight hall monitor so that, when he is taken down by a thoughtless and meanspirited prank — he is tricked, in his loneliness, into thinking that Olivia carries a romantic torch for him, and that he stands a chance not just to woo, but win her, if he plays his cards right — the audience sides with the pranksters and cheers his downfall; we hate snobbery, and self-righteously love to see self-righteousness punished, because we’ve always been terrific. Again, that’s one way to play it; but Smith doesn’t. Look: if I tell you that I cried in the theater, you need to understand that that’s a low bar, I cry in the theater all the time, once because a gown was simply too beautiful. But Smith’s reading of the line, “Madam, you have done me wrong,” made my eyes sting and my breath catch in my throat. Malvolio has been done wrong — “notorious wrong.” His exit from the stage is sobering and bracing — a chill in a production decked in hot flowered suits and low-cut bodices by Jennifer Moeller.

(There are times when Smith seemed to be channeling Paul Lynde, an old reference which will lose the half of you that either aren’t gay with an encyclopaedic knowledge of Bye Bye Birdie, and the half of you that are too young, and that’s a choice, that channeling, that didn’t always work for me. This happens after Malvolio has read the forged letter, encouraging him in his suit for Olivia, and he erotically rides an airport bench, which swelled the laughter in the auditorium, but felt entirely out of place in Smith’s careful construction of this character up to that point. Similarly, Hannah Yelland, as Olivia, seems to go too quickly from deep mourning to ripe flower, her black weeds in the early scenes of the play the only thing communicating her grief. It feels, in this production, as if Olivia’s sadness is a trick or stalling tactic, rather than something deeply felt and deeply tended. Likewise, too, is Patel’s characterization of Orsino, who seems too much the embodiment of a can of Axe Body Spray at times, so that one feels protective of the women he’s pursuing. Moeller’s Night at the Roxbury costuming doesn’t always help dispel this worry.)

Sadness suffuses this comedy: Viola and Sebastian both think the other is dead, and that they’re now living an untwinned life, unmoored from the only constant they’ve known. Olivia has lost her father and her brother, one after the other. Duke Orsino is so desperate for love that he is willing to woo a woman in mourning. And whatever happened in Sir Toby’s past to keep him in a constant state of intoxication in the present is never explored. The program even carries an essay titled, “The Sadness of Twelfth Night’s Comic World.” But the plays direction, and specific choices some actors make, seems counter to what seems manifest in the play. There is deep melancholy here, but it is little explored. If I were creating the role of Ethan McSweeny for a production about this production, and was asked why this is, I might hazard something like, “Highlighting the madcap comic energy as often as I did, leaning with my whole body into the play’s farcical moments, actually allowed me to present those darker moments — especially Malvolio’s exit, and the way I ended this play — in stark relief.” And that might even work. 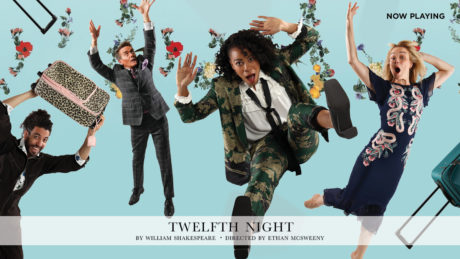