“Tale as old as time”? If you’re the parent of a young child who has watched a certain Disney animated film on video over and over and over, it might seem that way. But when you take that child – or if you just go on your own – to the Media Theatre’s beguiling new production of Disney’s Beauty and the Beast, you may be surprised at how fresh and, well, animated it all seems. And despite all the familiarity – and, yes, all the corniness – of this tale of a cursed prince-turned-beast who manages to win over the smartest, prettiest, and most headstrong girl in a “poor provincial town,” there’s a lightness and sweetness to Director/Choreographer Dann Dunn’s production that will win you over.

Much of that is due to the charming lead performance by Alanna J. Smith as Belle. She’s got the sparkling soprano, the lively smile and the rosy cheeks that the role requires. Watch her dynamic expressions as she evades the grasp of the conceited Gaston (a suitably slimy Bob Stineman), and you’ll see what delight she takes in the role.

Jarrett Jay Yoder brings a rich baritone and a nice emotional range to the Beast, showing both off in the Act One finale “If I Can’t Love Her.” And there are some nice comic performances from the supporting cast, especially JP Dunphy as the mock-suave Lumiere, Kelly Briggs as the stuffy Cogsworth, Julianna Babb as the sassy Babette, and Hillary Parker, who, as Mrs. Potts, does a lovely version of the title song. 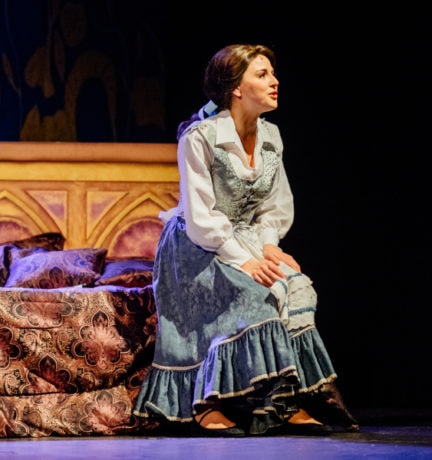 Linda Woolverton’s book sticks closely to the plot of the script she wrote for the movie version, but it’s not until the second act, when the plot centers almost exclusively on the Belle/Beast romance, that it obtains a depth of feeling that makes it especially heartwarming. It’s no accident that this tale that teaches children about the benefits of kindness, courtesy and respect has proven so durable with several generations.

And the show’s best feature, its score, is well-served. The movie songs by Alan Menken (music) and Howard Ashman (lyrics) retain their sense of grace, melodicism, and wit, and the songs added for Broadway (with lyrics by Tim Rice) include some poignant ballads that fit the score’s style well. (Except, that is, for the lumbering comedy number “Maison des Lunes,” which, as usual, brings the show to a halt.) Music Director Ben Kapilow’s nine-piece orchestra provides able support. And Dann’s choreography gives all the numbers plenty of vivacity.

The sets, credited to Fourth Wall Scenic, are sparse but functional. (There’s a scene in Act Two when the Beast shows Belle his Library for the first time; here, when she sees one meager bookcase and exclaims “I’ve never seen so many books in my whole life,” you may get the feeling that Belle doesn’t get out much.) Fourth Wall also provided the costumes, and while most are fine, a few are wanting: Babette is supposed to be a feather duster, but you wouldn’t know it from her costume here. And the costume for Chip obscures the face of the child actor inside (Charlie Carroccio and Adrian Henry alternate in the role).

Fortunately, Steven Spera’s lighting adds a nice sense of spectacle. Patricia Delsordo did the wig and makeup design, delivering a credible, imposing design for the Beast.

It all adds up to an enchanting time at the theater, no matter what your age.

Running Time: Two hours and 30 minutes, with an intermission.