If your fond childhood memories include Dr. Seuss
The Grinch, his dog Max, and a Ville filled with Whos
You might like a sequel from 40 years hence
Though if you’re a Grinch, too, you might take offense.

The new play Who’s Holiday! by Matthew Lombardo
Is strictly R-rated, so don’t bring your kiddo
Yet if your mind’s open and you trust rave reviews
His Off-Broadway treat will come as good news!

How the Grinch Stole Christmas is the source of his send-up
But you’ll never guess how this parody ends up
Upstairs at the Westside, Carl Andress directs
These comical couplets, to saucy effects.

Cindy Lou’s now a grown-up, with all that it brings
Cocktails and cursing and smokes are her things.
She’s led an adult life that’s chock full of spice
Her shocking backstory’s more naughty than nice.

She lives in a trailer from earlier days
David Gallo’s great set captures her kitschy taste
And so do the costumes, designed by Jess Goldstein
In loud Christmas colors (glitzy red, gold, and bright green).

Bart Fasbender, Ken Billington and Jonathan Spencer get the glory
For the sound and the lighting enhancing her story
Michael Sottile’s original music’s expressive
This world-class production team’s skill is excessive.

Cindy’s wig styled by Charles LaPointe is such a fright
Still you can’t help but love her, try as you might
Though some of her words and her deeds are nefarious
She’s got a big heart and her humor’s hilarious.

She’s hosting a Christmas Eve fête for her friends
It’s her way of trying to make some amends
For all that she did before going to jail
Will the party succeed, or will it just fail?

Lesli Margherita stars alone in the show
She delivers the raunch, rhymes, and songs like a pro
Oh, that’s right, she is one, an Olivier-winner
There’s no way that talent is just a beginner!

She recounts Cindy Lou’s tale directly to us
And never once hesitates to sass or to cuss
The f-word and c-word are used with abandon
And audience members are picked on at random.

Taunting those in a cheap seat
Serving hors d’oeuvres of rat meat
Her behavior is laughably vulgar and crass
She’s a pain in the butt (bet you thought I’d say “ass!”)

Political incorrectness is Cindy Lou’s curse
Yet she stands for acceptance of those who’re diverse
She’s had a tough life, but it hasn’t destroyed her
It’s actually made her reflective and stronger.

And when you start thinking things couldn’t get worse
The mood soon reverses, in Seussical verse
There’s joy to go ‘round this holiday season
If we’d all just be nice, we don’t need a reason.

At the ending we’re left with a serious thought
Which underscores all of the laughter she wrought
That “white trailer trash” Cindy Lou just needs kindness
It’s good that Who’s Holiday!‘s here to remind us. 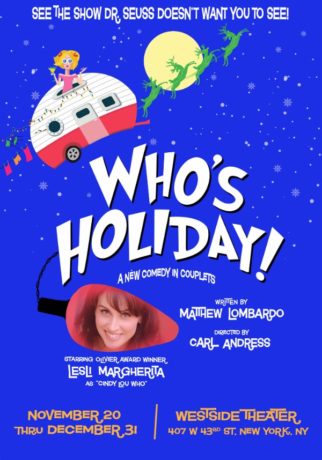 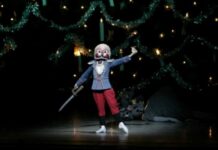