Before I interviewed Storm Large, I was a bit wary. She seemed like…a lot. A big, brash personality who might hug you to death if she liked you or punch you in the face if you pissed her off. Then I spent an hour laughing and blushing on the phone with her and now I think I’m a little bit in love.

“I’m not a comedian,” Storm told me, in between stories that had me howling on the floor. (She’s kind of a comedian. But I can’t print most of her stories here because this is not an R-rated publication.) She’s also smart as a whip, deep as a sage, overtly (bi)sexual, and not afraid to lay her insecurities at your feet, come what may.

Her success as an artist is due, in no small part, to her larger than life personality. When approached by a friend with the idea to write what became Crazy Enough, a successful one-woman cabaret show turned award-winning novel several years ago, her first reaction was: “‘Yeah, cool! It can be about all of my sexual experiences and being on tour and sex, drugs, and rock-and-roll! It can be super funny!’ And my friend was like, ‘No, I want you to talk about your mom.’ And I was like, ‘But that is super depressing. Why would anyone want to see that?'”

Storm grew up with a mentally-ill, physically-absent mother and a dad who didn’t know what to do with his ungainly, misfit daughter. So he mostly ignored her and she fended for herself, visiting her mom in mental hospitals until the fateful day at age nine when she asked a doctor if she would end up crazy like her mother. “Yes,” the doctor replied. “It’s only a matter of time.”

In order to see life in its full crazy spectrum, you have to go to the dark places.

Thus began a journey from self-destruction to self-discovery. There were years filled with drugs and risky behavior, but ultimately she found the strength to channel her demons into art and into a sense of duty to loved ones and the world around her.

“In reality, I became an artist out of loneliness. Growing up, I spent a lot of time trying not to go crazy by basically going crazy and almost dying and then figuring out that being crazy is way better than playing it safe. In order to see life in its full crazy spectrum, you have to go to the dark places.”

So far in her wide-ranging career, Storm has achieved success across a spectrum of opportunities: As a chanteuse who can infuse original rock tunes and jazz standards with a punk-rock attitude and an uncanny knack for storytelling, as a finalist on the 2006 TV show Rock Star: Supernova, as a vocalist for the band Pink Martini, and as a performer with symphonies at the world’s premier venues and with artists as diverse as Liza Minnelli, k.d. Lang, Rufus Wainwright, and George Clinton.

Storm is bringing her Holiday Ordeal show to 54 Below in NYC this Thursday and Friday, and Sixth & I in DC this Saturday.

“I call it the Holiday Ordeal because when you grow up kind of lonely, you fetishize Christmas as something that should be great for yourself and other people who might be lonely and disenfranchised. I don’t have any religious affiliation with Christmas, just an idea that it should be exuberant, joyful, and gastronomically irresponsible, with lots of cinnamon, lots of sugar, and hugging, and this childlike idea of everybody getting along.”

I asked Storm if she feels being a performer, and therefore reliant on public approval, is hard for someone with a history of loneliness.

“I do in a way, but not as much as I feel the responsibility to my band, to the people who count on me to make them money, and to my fans. I feel like, because I’m good at singing and performing, and I’ve created this life for myself and for a bunch of people that I’m connected to, it is sort of my service. My job is to make people happy and to laugh and to feel good and man, that’s a great thing to be able to do.”

I mentioned to Storm that she had this sort of bombshell, pin-up-girl image going and asked what it was like to maintain that as she got older.

“Well, I worry about my ass all the time, because it’s starting to look like the neck of a bulldog with a pouty lower lip,” she replied. “I was a fat, ugly punk rock kid. So in a way, the whole hot, bombshell thing is so new that I only started owning it in time for age to start decaying my looks. But getting out of your own head by being in service and volunteering and understanding that life, as long as we’re here, is really big, and goes way beyond things that we are encouraged to worry about, that helps.”

And how does Storm Large help her loved ones?

“I have this girlfriend who owns a strip club and she was very sick in the middle of chemo a few years ago. She was feeling really bad but she made it to this party one night and I was holding her hand and said, ‘You are going to get through this, you have a lot to look forward to and…you know what else you have to look forward to? When I turn 50, I’m gonna sell tickets, we’ll pick a charity, any charity you want and I’m going to take off all my clothes at your club.’ She was like, ‘You would do that?’ ‘You know I would do that. Now put a smile on your face.’ She got better and she hasn’t forgotten that.”

“Of course I’m going to do it! I promised a dying woman! I can’t go back on that!” 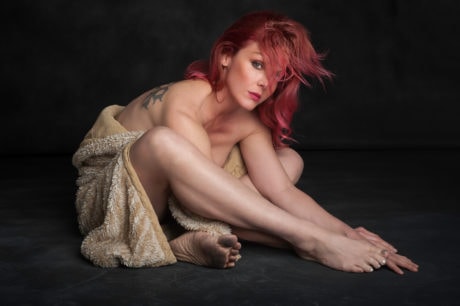 Parental advisory applies this video too: