If you are barely in the mood to do something Christmassy, if Tiny Tim gives you hives, and learning lessons is anathema, The SantaLand Diaries is the bracing Christmas cocktail for you. The one-man show starring Cameron Folmar and directed by Lynn Sharp Spears at Drafthouse Comedy Theater in DC is the theatrical adaptation of David Sedaris’s beloved memoir about working as a Macy’s Christmas elf.

Cameron Folmar plays David (Sedaris’s avatar), the out-of-work, soap-opera-obsessed New York transplant desperate enough to head to Macy’s for an interview and lands a spot in SantaLand. As he transforms into his elf alter ego, Crumpet, we learn what it takes to become one of Santa’s chosen helpers. It’s a fascinating and candid look behind the scenes to see how the Christmas sausage is made, so to speak.

Folmar’s David is at times arch, often catty, but always hilarious, conversational, and engaging. He relates to his audience like a room full of friends, occasionally reacting to us in shared horror or disbelief of his situation. Only a friend can help you see the humor in a job that includes something called “The Vomit Wall.”

Set in your basic Santa visitation room, our Christmas visit with Crumpet/David is punctuated with occasional brief black-outs, musical interludes, and PA announcements to aid the progression of time through the Christmas season, taking us from David’s desperate interview through ducking out of work on Christmas Eve.

As this is a one-man show, it’s a good thing Folmar is such an entertaining tour guide to the trials of the retail holiday season. (Warning: if you are a fellow veteran of a Christmas season at a department store, you might get a touch of the PTSD.) He tells us about the best and worst (mostly worst) of the public, but never fear. When you are nearly in danger of learning a Special Holiday Lesson, he backs off just in time for laughter.

If you are a fan of the David Sedaris piece (adapted by Joe Montello), you will not be disappointed. Director Lynn Sharp Spears lets the script and Folmar’s performance shine. Though the sight-lines and acoustics in this black box theater weren’t top-notch for this 5’2” reviewer on the fourth row to the side, but I don’t think I missed out on any holiday magic.

For Sedaris fans, comedy fans, Christmas cynics, and anyone who needs a break from relentless tinsel and cheer, The SantaLand Diaries is an ideal holiday-ish evening out. 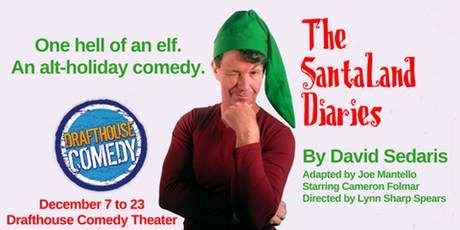 Running Time: One hour and twenty minutes, with no intermission.

Interview: “You and my mother can purchase sweaters for obese people to your heart’s content”–A Conversation with Cameron Folmar by Mike Bevel