Opening Tiny Dynamite’s seventh season of “A Play, A Pie, and A Pint” – its popular happy-hour series of one-act plays, which includes a slice of pizza and a beer or soft drink with every ticket – is the American premiere of Lynda Radley’s The Art of Swimming, a one-woman play about the author’s rediscovery of Mercedes Gleitze, the first person to swim the Straits of Gibraltar and, in 1927, at the age of 26, the first British woman to swim the English Channel. But those aren’t the only firsts with this presentation. Directed by KC MacMillan, it’s also the first production since her appointment as the company’s new Producing Artistic Director (taking over the reins from Founding Artistic Director Emma Gibson, who continues her association as Associate Artistic Director for Special Projects) and the first in a new venue, upstairs at Headhouse Café. In addition, the series will now, for the first time, offer Saturday night “dessert shows” starting at 9:30 pm.

Starring Lee Minora (an accomplished solo performer who recently presented her original bouffon piece Cheeks in the Edinburgh Festival Fringe) as both Gleitze and Radley, the show takes the form of a memory play, with segments of the former enacting key moments from her life and the latter presenting the results of her research on the trailblazing athlete. She fluidly switches back and forth between characters with confidence, assuming an English accent for the swimmer and adopting a blustery Victorian-style British manner when imitating Captain Matthew Webb, the first man to swim the Channel in 1875 – but inexplicably uses her own American voice for the playwright (born in County Cork and living in Glasgow, Scotland), who, in reality, speaks with a distinctly Irish lilt (dialect coaching by Leonard Kelly).

Under MacMillan’s active direction, Minora energetically moves through the cabaret space for the different scenes and locales, interacting with the audience, and, at times, addressing us directly, in a vigorously gestural performance. She recounts Gleitze’s experiences of first learning how to swim as a child, of her daring attempts to cross long-distance bodies of water, of her international celebrity as a swimmer, spokesperson for Rolex watches, and performer at the Blackpool Tower Circus, before her retirement from the sport, subsequent marriage and children, philanthropic work, and disappearance from the spotlight. Minora also gives us a taste of her strong and tuneful voice, singing the popular 1925 English song “Show Me the Way To Go Home” after the momentous swim. As Radley, she asks unanswerable questions of her long-deceased subject about what she couldn’t find documented (Gleitze died on February 9, 1981), and imagines the feelings she might have had as she faced the challenges of achieving her goals – including the public denouncement of her feat as a hoax and her “vindication swim” to prove the validity of her accomplishment (“Nothing great is easy”).

Supporting Minora is actor, composer, musician, and sound designer Daniel Ison, joining her in the background of some of the segments, and underscoring the moods of the story with his original live music on cello and guitar, and with transportive sound effects (the clicking of an old typewriter, the music of the era played on a gramophone, the movement of the water in which she swims). Alyssandra Docherty provides dramatic illumination, with spotlights that follow Minora around the venue, MacMillan costumes her in a present-day loose-fitting jumpsuit that allows for easy movement, and Sara Outing’s simple scenic design and props effectively aid in identifying the sites, people, and activities she discusses, and add touches of humor to the recollections (a cut-out handlebar mustache and hat, a tiny bucket of water for the tank at Blackpool).

While the outward subject of the show is Radley’s obsession with re-establishing the reputation of Gleitze as a groundbreaking female athlete, the traditional theme of memento mori (“remember death”) is its important underlying message. Inspired by an old photograph of the swimmer that she found tucked away in a library book, her play makes us consider the fleeting quality of life and fame, and the personal memorabilia that remain, while their meaning and their owner’s feelings are lost, and the person is forgotten with the passage of time and the people who knew her. It’s a poignant and thought-provoking moral (and one dealt with beautifully in the current Disney Pixar animated film Coco, based on the Mexican tradition of The Day of the Dead). But even with a running time of under an hour, the script becomes redundant (the conclusion summarizes what we all just saw performed), not all of the scenes are as noteworthy or riveting as others (some are quite dull and recitative, especially when Radley enumerates the known facts and written accounts of Gleitze’s biography), and too often it seems that there is more focus on the ego of the writer and her dedicated research and imaginings than on the appreciation of Gleitze’s life and career. Despite the issues I found with the script, and the Americanization of the playwright’s accent, Tiny Dynamite’s production of The Art of Swimming brings the story to life and delivers its universal message of the transitory nature of our existence loud and clear. 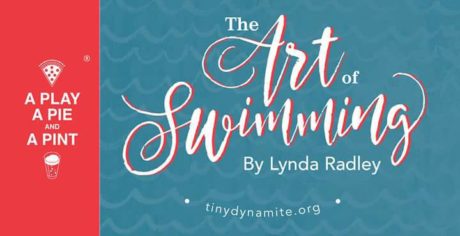