It was an enjoyable time last night seeing all the hard work Third Wall’s cast put into A Wonderful Life: The Musical. The show is an adaptation of the movie It’s a Wonderful Life with many great songs, which move the play along. Ed Higgins and Daniel Planet lead this production as director and musical director respectively. They, along with the rest of the cast and crew, produced an evening of wholesome family holiday fun.

The scene of Bedford Falls, New York, is set by a series of panels upstage, which are flipped to change to various locations. However, the main scene is a pretty landscape painting of Main Street Bedford Falls across the panels, painted by Amy Rudai, who also designed the costumes and acts in the show. The anachronistic marquee in the painting momentarily distracted me with The Music Man and Jekyll & Hyde since neither was written until after the 1940s, but the painting was so lovely it was easily forgiven. Jordan Hollett, assisted by Pat Rudai, designed and built the overall set, which effectively communicates the different scene locations with a few pieces like a painting on the wall and a couch. This makes for simple scene transitions, though, on the whole, the transitions could have had a little more hustle to them.

What also set the scene for me from the beginning was the live band accompanying the ensemble. It is always wonderful to have live accompaniment. This band had a lovely sound and excellent balance with the actors so that everyone could be heard. I was actually quite impressed with the sound quality of the production. Zacharias Stewart, the sound designer, did a fine job. It came across clean and clear. In addition to the sound quality of the band, Daniel Plante did a great job coaching and directing the sound of the ensemble. It was quite a large ensemble, and they were enthusiastic and produced nice, well-blended harmonies. Due to the size of the ensemble, I thought it was a smart idea to have the actors singing backstage for many of the numbers so that the sound of the song can be rounded out, while keeping the scene on stage intimate.

Zacharias Stewart was also the lighting designer. The lighting throughout the show is very good. Some of the colors were quite dramatic, but I appreciated the smooth light transitions to communicate different moods, sometimes even within the space of a song. I particularly enjoyed the fun, different colors during the Charleston competition.

Speaking of the Charleston, Mea Holloway’s choreography is exciting and dynamic – not just for that number, which was fun, but throughout the show. Holloway found creative ways to make a large ensemble fit on a small stage. She also made use of the theatre aisles, which is a nice way to bring the audience into the show.

The costumes designed by Amy Rudai are a nice approximation for the decades the show spans. It is not an easy taking costuming a period show, but her choices properly evoked the time. The angel wings used were very good quality, as well. I must say, though, that several of the actors’ faces were quite washed out. Rudai may have had nothing to do with makeup choices, but poor George Bailey was almost ghostly.

As mentioned, it is a large, energetic cast that brings A Wonderful Life to life at St. Thomas’. This cast is lead by Henry Cyr as the hard-working, do-gooder George Bailey. Cyr put on a great performance. His George was very sincere, and his voice was wonderful and clear. Cyr’s vocal and acting talents particularly shine during the emotional song “Precious Little.” Lauren DeSha played George’s eventual wife, Mary Hatch. DeSha brought strength and a sweet voice to the role. Andrew Pedrick as Clarence is only seen in brief scenes throughout the play, but his slightly silly, wing-obsessed portrayal of the angel added some appreciated levity to the show. Pedrick also had some really nice serious moments once he was on Earth interacting with George. Finally, a stand out for me in the ensemble was Olivia Winter who played Harriet and the Bank Teller at this performance. She was a very active ensemble member in every scene, and her engaged facial expressions and good dancing often drew my eye.

It’s a Wonderful Life is a seasonal classic, and I think the story is even better as A Wonderful Life: The Musical. Third Wall Productions has clearly worked very hard to bring this show to an audience. If you’re looking for a nice way to get you and your family into the holiday spirit, this show is a good way to do it. 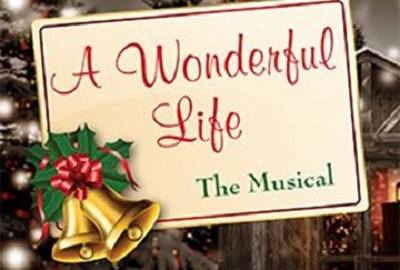 Running Time: Two hours and thirty minutes, with one intermission.