Who isn’t familiar with the story of Ebenezer Scrooge? Wolf Pack Theatre has retold the familiar story of Charles Dickens’s A Christmas Carol, in a different way each year, for the past four years. Director and script adapter William Dean Leary always makes these productions shine with “charity, hope and compassion.”

Leary’s adaptation of the story, while set in modern times and with underlying themes of struggles of homelessness and mentions of Scrooge Enterprises, is still a well-known tale of pride and redemption. The story asks the question: “Will Scrooge find penance and salvation?”

The production was punctuated with many wonderful Christmas carols, sung by the full cast, including, “We Wish You a Merry Christmas,” “Jingle Bells,” “Silent Night,” and “Amazing Grace.”

Kaitlyn Elizabeth Gebhardt delivered a delightful performance as the seriously-ill Tim Cratchitt. Gebhardt brought a studied pathos to her role. Tim Jansen was impressive as Ebenezer Scrooge. Jansen was recognized by this publication as “Best Of Actor in a Leading Role Honoree 2015” for playing Scrooge.

John Osborn, as Young Scrooge, excelled in his scenes with Michael Reeher’s Andrew Scrooge, Ebenezer’s father. Osborn also served as musical director and sang wonderfully in “After You’ve Gone/After You Get What You Want You Don’t Want It.”

Wolf Pack Theatre Company regular Susan L. Smithers brought compassion to her role as Pastor Charlotte. I loved her scenes with Gebhardt. Smithers brought emotion to lines such as “You must feel sadness before you can feel joy.” She had a good solo in “What Child is This?” “It Came Upon a Midnight Clear” was made beautiful by Katherine Metres Akbar’s solo as Belle, Ebenezer’s beloved. Elizabeth A. Weiss was powerful in her scenes as the Ghost of Christmas Past.

Leary, as director, made full use of the sanctuary of First Baptist Church of Hyattsville; which is convenient because the show takes place in a church. Many actors made entrances through the center aisle. Leary’s set design, on a simple thrust stage, consisted of miniature Christmas trees and various other decorations.

Special effects were handled brilliantly by Stephen Beitzell. Various scenes were enhanced by eerie red or blue lighting. Beitzell’s wife Dannielle gave many members of the cast funky, red Christmas vests to wear when they were caroling. A Christmas Carol is a joyous yet somber, serious yet cheerful show that will delight families looking for an entertaining Christmas show. 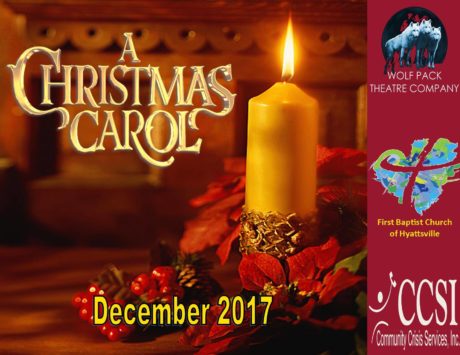 Running Time: Two hours and 45 minutes, with a 15-minute intermission.

A Christmas Carol plays through Sunday, December 17, 2017, at Wolf Pack Theatre Company performing at the First Baptist Church of Hyattsville, MD – 5701 42nd Avenue, in Hyattsville, MD. Buy tickets at the door or purchase them online.