Now in its seventh year, the Keegan Theatre’s annual production of Matthew J. Keenan’s An Irish Carol has become a favorite Washington DC holiday tradition. It’s easy to see why. A quintessentially Irish take on Dickens’ classic, A Christmas Carol, Keenan’s play offers a holiday-perfect tale of redemption and the power of love. Of course, we know from the start how the story will resolve. Yet the route taken towards the tale’s joy-filled outcome is powered by empathetic and believable contemporary characters who, well-directed by Mark A. Rhea, engage in a series of often heartfelt and sometimes purposely stunted conversations.

All joie de vivre seems to have been scrubbed clean from the crotchety David, proprietor of the Dublin pub in which the play takes place. He lumbers around the bar like a wounded and angry bear, trodden by his memories and buried in his make-work. Played once again by the esteemed Kevin Adams, David communicates as much by his defeated posture and haunted silences as by the cold commands he issues to his Polish barman, Bartek. Yet, however expressionless his face, Adams wisely refuses to erase the pain that emanates from David’s eyes. As Keenan adheres faithfully to Dickens’ time-honored storyline of eventual redemption, we wait eagerly for how, not whether, his cold and cruel façade will crack.

Plenty of lively characters try to penetrate David’s isolation, mostly without success. His brother Michael, played with passion by Michael Kozemchak, comes by to invite David to his family’s Christmas dinner. The ensuing conversation is rich, genuine, and painful to anyone who has suffered a long-term family rift. It has been years since David has even seen Michael’s sons, and now a third child is on the way. As happens every year, Dave declines. He is too “busy,” he claims – though it is obvious to all that his business has slowed to a crawl. This time, Michael vows will be the last time he prostrates himself before his abrasive brother.

Frank (Timothy Hayes Lynch) and Jim (Mark A. Rhea), loyal friends who no longer expect anything but gruffness from David, enter the bar this Christmas Eve for a celebratory drink. They are among the dwindling clientele of David’s old-school pub. Many other patrons of the once-lively place have been put off by the owner’s surly attitude, and they prefer livelier, hipper bars. Lynch is funny and endearing as the gangly, often inappropriate, and increasingly drunk Frank. He and the kindly Jim move the story along, giving us hints about the younger, kinder, more gregarious David and what soured him on life. As with Scrooge, there was once a woman whom he adored, and who rejected him when he turned full-throttle to avarice.

Two episodes in this compact, ninety-minute play conspire to pry open David’s sordid, self-created isolation booth. The first occurs when he is visited by the cocky young Simon, a former pub employee played masterfully by Christian Montgomery. He is accompanied by his fiancee Anna, imbued with good sense and compassion by Caroline Dubberly. Simon is now part of a business partnership aimed at gobbling up Dublin’s most charming old pubs and transforming them into chic, history-inflected watering holes for the city’s young elite. Anna is repulsed by Simon’s slick and repeated attempts to pressure the unyielding David to sell his failing pub. The couple’s argument, played out in full view of the bar patrons, stirs David to reimagine the path he once took toward misery when his beloved Bernie left him.

The second episode involves Richard (played marvelously by Daniel Lyons), David’s former business partner Bernie’s eventual husband. Bernie appears with a letter left by David’s lost love.  She was buried just a year ago, also on Christmas Eve.  Their gut-wrenching conversation, an emotional peak of this drama, is surpassed only by David’s wordless yet spellbinding reaction to Bernie’s missive.

The fine performances, many by Keegan’s excellent company, were marred by the fact that virtually all the Irish characters often fell out of their Irish accents, ‘defaulting’ to standard American English and breaking the spell of the play.  This was unexpected from such experienced actors, and in a theater that champions Irish plays.  One hopes that their speech will be corrected quickly, and the magic restored.

Interestingly, and much to his credit, it is Josh Sticklin as Bartek, David’s bartender, who maintains his Polish character (and his accent) perfectly throughout the show, and who is among the most affecting of Keenan’s characters.  Seeking a better life for himself, his wife, and disabled young daughter (shades of Tiny Tim) Bartek emigrates to Ireland and is willing to work hard for his irascible boss with the hope of eventually getting ahead. Sticklin is absolutely outstanding in this role, and heroic in his capacity to absorb David’s cruelty while never losing his own humanity and optimism. The coincidental bond he forges with Anna is among the loveliest and most-uplifting parts of the play.

It is always a treat to see fine performances in the lovely Keegan Theatre, and this production is no exception. Playwright Keenan, who also designed the set, is aided admirably by Cindy Landrum Jacobs’ set dressing and properties design, Kelly Peacock’s costumes, Dan Martin’s lighting design and Jake Null’s sound design, which provides constant reminders of the cold and frigid night that rages outside of the pub’s front door.   It’s no wonder that each of the characters seeks solace and understanding within the pub’s solid walls.  We’d all do well to linger in David’s pub awhile, reminding ourselves of what is important in life.

Running time:  90 minutes with no intermission 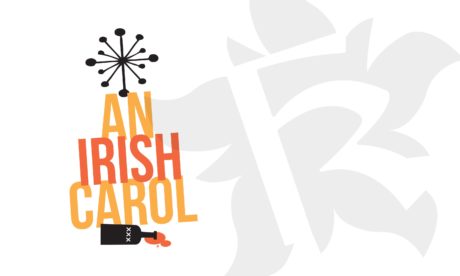