Barely two months ago, the call went out for auditions to this cast. This is worth mentioning because in that short time, considering all the holiday distractions and scheduling challenges, the Montgomery Playhouse production that I saw last night at Gaithersburg Arts Barn was flawless, energetic, funny, poignant, and colorful! The Reluctant Dragon is what live family theater is all about!

The dynamic duo of producer David Jones and director Loretto McNally have once again created a thoroughly delightful community theatre experience. Brilliantly whimsical costumes, created by Stephanie Yee and Erica Arnold, color every scene. Even the rubber chicken has an outfit! These vibrant coverings stand out against a perfectly minimalist set – consisting of a rock, a bench, and some trees designed by David Jones. Along with the underlying soundtrack – reminiscent of Pee Wee’s Big Adventure, every element of the production kept the action and storyline zipping along at a dizzying pace! 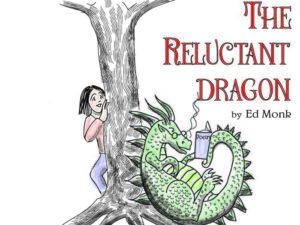 Uniquely – I believe – in a prologue to The Montgomery Playhouse production, we meet the story’s understaffed “due to budget restrictions” local militia troop played by leader Nikolas Henle and his subordinates played by Anastasia and Zachery Rittenhousesmith who recruit the help of additional militia members from the audience. Our audience yielded three adorable young ladies whose candid reactions throughout the evening bespoke the true joy and honesty of the entire cast’s performance.

That bit of housekeeping accomplished, our tale begins as a pair of flimflam sales folks, Joe & Sam, played by Trish Pisarra and Rachael Harding, grab our attention as they conspire to wrench a fortune from the good people in the zany village of Veesaldorf.

Local ‘Veesal’ youngster Charity, played by Jade Fraction, longs to have her passion for poetry appreciated by anyone – especially her wildly distracted parents played by Bruce Hirsch and Joy Cecilly Gerst. Charity’s kvetching mom has a to-do list of ridiculous chores which Charity and her clinically self-deprecating dad endeavor diligently to avoid. Charity’s dad encounters a real live dragon during one of his chore-dodging outings and rushes home to incite all manner of harm against the beast. He seeks action from a politically incompetent mayor played masterfully by Marc Rehr who’s only redeeming quality is the overriding proficiency of his omnipresent subordinate Jenkins played by Alexandra Burris. She fills the role like TV’s Corporal “Radar” O’Reilly did for whoever was running the 4077th MASH unit.

Once the Dragon, played by Cassandra Redding, appears, we begin to see the true mastery of the Yee/Arnold design team. Complete with claws, an enormous tail and wings – the dragon highlights your visual experience. Redding’s silly, bouncy, incredulous portrayal is childlike magic! In collusion with Charity, this pair of prolific poetic progenies rhymes its way through fantasy, politics, and conformity with ease and grace.

To deal with the threat which a dragon supposedly presents, the mayor hires a knight played by Mollybeth Rushfield. If you are familiar with Ms. Rushfield’s talents, you are aware that every element is over the top. Her gloriously festooned knight’s armor is as zany as her antics, complete with a knit helmet, bedazzled tunic, sparkly jeggings and silver high-top “Chucks.” I must, at this point, highlight the professionalism of her ever-present squire played by Samantha Fraction. She is the perfect straight man to this comedic duo. How she was able to maintain composure – even during those “Monty Python-esque” galloping scenes – is the ultimate thespianism.

Please – feed the kids early and take them to see The Reluctant Dragon. These days – a little silliness isn’t the worst thing you could do for your family!

Running Time: 80 minutes with no intermission

The Reluctant Dragon performs weekends January 5 through 21, 2018, at The Montgomery Playhouse, performing at The Gaithersburg Arts Barn – 311 Kent Square Road, in Gaithersburg, MD. For tickets, call (301) 258-6394 or go online.