Playwright Caleen Sinnette Jennings serves up an ace with the world premiere of Queens Girl in Africa – a riveting, semi-autobiographical account of her experience living in Ibadan, Nigeria in the 1960s. This production is a one-woman show starring Helen Hayes Award-winner Erika Rose, whose performance displays electrifying energy and range.

The story opens on a dock in Liverpool, England where we are (re)introduced to 15-year-old Jacqueline Marie Butler, the protagonist, as she and her parents wait to board their ship to Africa, aka the motherland. Jackie’s dad made the decision to move his family from Queens to Nigeria after witnessing the assassination of his close friend and fellow civil rights activist, Malcolm X.

Jackie describes her time in Nigeria as “The Africa Years,” a period filled with irony, contradiction, and complexity. Her father believes their family’s move to Africa is the fulfillment of Marcus Garvey’s dream that Black people should resettle in their ancestral homeland. His idealism is tested as unrest between the rivaling tribes in Nigeria escalates and there’s a political coup.

Meanwhile, Jackie is routinely made to feel like an outsider by her peers. She’s even called a “white foreigner” by a classmate which surprises her. Being “Black” does little to connect her to Nigeria and she’s forced to examine her American privilege despite the injustices and inequalities she knows Black people face in the United States. These realities are difficult for her to reconcile at first, but she finds a way to expand her understanding of culture and justice. “Their history is not our history” is one of the lines that sums up how she and her family begin to move toward a greater awareness of the complexity of Nigeria’s tribal culture and the ramifications of colonization on that region.

Erika Rose is truly a magician in the way she fully embodies dozens of characters and dialects throughout the play, making us forget this is a solo performance. She weaves in and out of the accents, body language and distinct point-of-views of each character with an authenticity and precision that is spellbinding. This is a clear testament to Paige Hernandez’s direction and choreography.

Every movement Rose makes is fluid and purposeful. There’s a scene midway through the play where she changes costumes. Instead of exiting the stage for a hard scene transition, Hernandez incorporates that moment into the story through a fun dance number that illustrates Jackie’s growth and maturity. We see her transition into a more confident young woman. It’s a moment that’s fully lived out in front of the audience and a pleasure to watch.

Another stand-out scene choreographed by Hernandez occurs when Jackie attends an event with her family out in a field. Everyone’s dancing to Jùjú – a style of Nigerian popular music. When invited to join them, she reluctantly begins to dance and not much time passes before she abandons all apprehension. The beat of the drums pierce through her body and her R&B dance steps morph into free-flowing movements that carry a meaning only her soul truly understands. That scene is one of the rare moments that Jackie feels fully connected to her African ancestry and free from judgment. Through dance, the bridge between Black culture in the U.S. and its derivation from African culture is highlighted in that scene.

Jennings’ writing is the perfect blend of poetry and prose. In a recent article, she told the Washington Post that while developing this story she discovered a new syntax, where “description turned into dialogue.” The dialogue is indeed vividly descriptive and operates as an invitation to actively participate in Jackie’s journey. Words are strung together like velvet and take shape around our ears, creating images that place us inside the story, seeing and feeling as the characters, no longer merely observers. When Jackie is gifted a journal by her mom to document their time in Africa we become the pages of that diary. We feel the sting every time she’s made to feel like an outsider by a peer. When she eats her first plate of peppeh stew our lips burn with hers, when she learns how to dance to Jùjú music our bodies also sway to the rhythm of the beat and when she kisses her long-time crush, Gillam Dendricks, for the first time our hearts also swoon.

The show delivers on all levels and is best described in the words of its all-star production team:

Jackie, the protagonist, combats the requisite entanglements with teenage euphoria and undue angst, all the while tracking the maddening socio-political shifts that invariably shape her world views and burgeoning sense of self. Strikingly, Jackie’s ‘coming-of-age-story’ mirrors, in many ways, the coming-of-age stories of both America and Nigeria: each wrestling with its own kind of civil war; they are all fighting within themselves, striving to grow into their full potential, struggling to embrace the beauty and power of their complexity. -Dr. Faedra Chatard Carpenter, Production Dramaturg

This tale is incredibly nuanced and the kind of production that challenges convention in a disarming way. It presents experience and leaves the audience to make their own judgments.

The set, lighting, projections and sound design (by Debra Kim Sivigny, Sarah Tunderman, and David Lamont respectively) not only enhance the story, but they are also key characters in the play that skillfully raise the emotional stakes in scenes, create moments of levity and remind the audience of the historical context layered throughout Jackie’s journey.  News headlines, photos, beautiful graphics and African patterns are projected against panels on the stage that arrest our hearts and minds.

Surtitles (captions at the top of screen or stage) have been integrated into the artistic design of the show to make every performance accessible.

Queens Girl in Africa is a powerful sequel to Jennings’ widely celebrated Queens Girl in the World, which debuted at the 2015 Women’s Festival. This second installment in the series was commissioned by Mosaic Theater to kick off their “Locally Grown Mosaic Initiative,” and the 2018 Women’s Voices in Theater Festival.

Crossing my fingers that a third installment of this series will soon be under development. 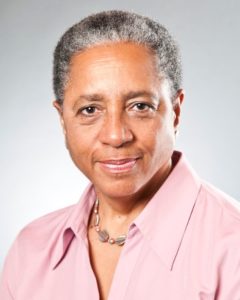 Caleen Sinnette Jennings is Professor of Theatre at American University in Washington, DC. She received the Heideman Award from Actor’s Theatre of Louisville for her play Classyass, which was produced at the 2002 Humana Festival and has been published in five anthologies. She is a two-time Helen Hayes Award nominee for Outstanding New Play. In 2003 she won the award for Outstanding Teaching of Playwriting from the Play Writing Forum of the Association of Theatre in Higher Education. In 1999 she received a $10,000 grant from the Kennedy Center’s Fund for New American Plays for her play Inns & Outs. Her play Playing Juliet/Casting Othello was produced at the Folger Shakespeare Theatre in 1998. In 2012, Ms. Jennings’ play Hair, Nails & Dress, was produced by Uprooted Theatre Company of Milwaukee and by the D.C. Black Theatre Festival. Her most recent publication is Uncovered, in the 2011 Eric Lane and Nina Shengold anthology Shorter, Faster, Funnier. Dramatic Publishing Company has published: Chem Mystery, Elsewhere in Elsinore: the Unseen Women of Hamlet, Inns & Outs, Playing Juliet/Casting Othello, Sunday Dinner, A Lunch Line, and Same But Different. Ms. Jennings is also an actor and director. She received her BA in drama from Bennington College and her MFA in Acting from the NYU Tisch School of the Arts.