Lights rise on The Humans and there, center stage, is Erik Blake (Richard Thomas), a fish out of water Pennsylvanian Dad in a New York apartment. What is he doing there? And why is he in an apartment alone listening to an extremely loud upstairs neighbor? The story soon unfolds. His adult daughter Brigid (Daisy Eagan) and her boyfriend Richard (Luis Vega) have just moved into the aging Chinatown pre-war duplex. It’s Thanksgiving. And Erik hasn’t slept a wink.

The following 90 minutes unfold at a rapid pace. This family is in many ways “every” family in the United States: rocked by 9/11, a generational divide in approach to religion, struggling with personal finances, working to integrate adult children’s significant others into a “norm,” navigating aging parents and independent but struggling adult children, and then there’s the email forwards from Mom. The audience laughs knowingly—especially at that one joke about Philly.
The Humans is the four-time Tony Award-winning play written by Stephen Karam and directed by Joe Mantello.

Rounding out the cast is Therese Plaehn as Aimee, Pamela Reed as Dierdre, and Lauren Klein as Fiona “Momo” Blake. There is not an out of touch performance in the lot. Reed and Thomas’ turns as Dierdre and Erik are particularly nuanced, concurrently heart-wrenching and funny.

Scenic design by David Zinn and costume design by Sarah Laux perfectly encompass the setting. We know these people and we know this apartment. Lighting by Justin Townsend sets the tone of the play (especially in the final ten minutes) and Sound Design by Fitz Patton is near perfect. The design is bright but intimate. One can’t help but wish this was being experienced in a smaller venue than the Eisenhower but the sound, scenic design, and lighting contribute in every way possible to make the audience feel like we are right there in the living room.

The Humans is one of those plays that sparks conversation and analysis. We see ourselves in every funny and sad line of dialogue in this American play. How have we been changed by circumstances out of our control? Who are we without success? How can we best love people we disagree with and cannot change? The Humans isn’t so much commenting on what we should do, it’s more like a blistering mirror showing a culture what we are. 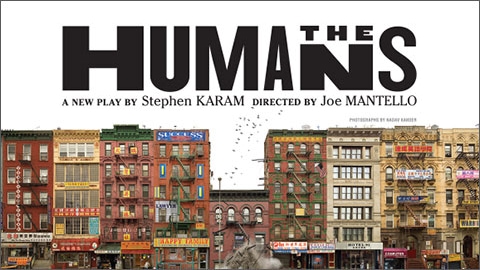