Throughout American history, the office of the president has served as the living embodiment of the American dream. The central tenet of our democracy, it demonstrates that any person can rise up and achieve the highest office in our nation. Our president should serve as the representative of the values of honor, truth, and justice.

Too bad not all of them have been up to the task.

The political pratfalls of our nation’s leaders are currently being put on humorous display at NextStop in their thoroughly engaging production of 45 Plays for 45 Presidents. Directed by Megan Behm and starring 5 fantastic women, it serves as both a hilarious and heartbreaking look at the men – and they have ALL been men – who have sat in the Oval Office.

The brainchild of a quintet of playwrights, 45 Plays is a series of 2-minutes sketches that go far beyond what the textbooks will tell you. This particular iteration of the play is relatively new as the 45th sketch (which was a choose-your-own-ending during the 2016 election season) was officially added following Donald Trump’s victory in 2016. With NextStop presenting their 2017/18 season in a series of dramatic pairings, 45 Plays provides a wonderful complement to the company’s recent production of Assassins. However, where Assassins aimed to agitate, 45 Plays seeks to delight.

Behm’s vision favors simplicity over style in the challenge to bring to life over 240 years of American history. Daniel Hobbs’ marble pylons and platforms evoke memories of seeing the monuments on the National Mall. Allison Samantha Johnson’s revolutionary style pants, vests, and cravats transition well through the centuries with their period and contemporary feel. Sean Cox as the lighting and projections designer wonderfully balances the ambiance to heighten any moment, whether it be comedic or dramatic. Reid May’s sound design is one of the highlights of the show with a distinct bell sound ringing every time a president’s actual words are used. It is on this canvas where the fun can really start.

The five actresses who make up this production are a veritable cornucopia of talent. Able to change characters at a moment’s notice, they form one of the most satisfyingly cohesive ensembles in recent memory, with each performer getting a wealth of material with which to play. Brittany Martz is reminiscent of a woodland sprite and is sensational as the universally disliked Warren G. Harding. Chloe Mikala presents a debonair James K. Polk and delivers hysterical one-liners throughout her quest to discover just what exactly Millard Fillmore actually did. Carolyn Kashner is the sole voice of reason amongst a barrage of Theodore Roosevelts and has a wonderful musical bit as Calvin Coolidge. Sarah Anne Sillers is a hopelessly sappy Martin van Buren and is incredibly moving as the wife of Franklin Pierce. Mary Myers is a master of physicality as the gargantuan William Howard Taft and is full of witticisms as Benjamin Franklin roasting new president Thomas Jefferson.

While humor is essential to 45 Plays, the play strikes a surprising balance with moments of intense human drama. It does not shy away from the unpleasant moments of our history. It reminds us that these people were human and made many mistakes and tried to do what was best for a nation under an incredible amount of pressure. While there are plenty of things about our presidents we can poke fun at, we must acknowledge the immense responsibility and hardship that these people shouldered.

45 Plays is an unflinching look at how our nation’s history brought us to where we are today. It is a reminder that while the president does hold a special place in our government, it is the people who have the power to choose who that person will be.

Running Time: 1 hour and 45 minutes, with one 15-minute intermission. 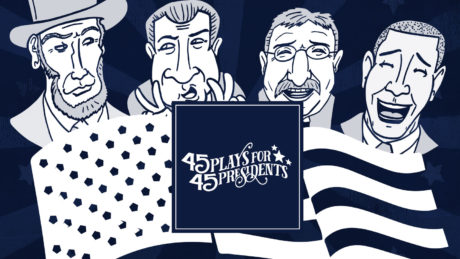