“So we beat on, boats against the current, borne back ceaselessly into the past.” So said F. Scott Fitzgerald, at the end of The Great Gatsby. Waxing West, by Saviana Stanescu, is the story of a Romanian woman who is desperate to escape the results of the vicious regime of Nicolae Ceaușescu. Like many others before her, she finds that the past is not so easily overcome. 4615 Theatre Company’s production is an intriguing addition to the Women’s Voices Theater Festival, and a darkly satiric evening.

Daniela (Alexandra Nicopoulos) was in the streets during the bloody 1989 revolution. Her mother, Marcela (Sue Struve) is desperate to get her 29-year-old daughter married, and so sends her off to New York to marry the American Charlie (Charlie Cook), who is, according to his mother, a tender, humble computer genius.

The first scene between Daniela and her family is absorbing. The sweet-faced Alexandra Nicopoulos is a fine Daniela, always sympathetic, but with an underlying strength that we hope will emerge and rescue her. Her bratty college-age brother Elvis (Jack Russ) puts his feet on the table and behaves as such boys tend to do everywhere. The excellent Sue Struve, as Marcela, is a classically devoted mother, worrying about Daniela and obsessively attempting to control her future. Jack Russ’ Elvis is instantly recognizable and lovable despite his many complaints. We learn that Daniela’s father, now dead, was imprisoned by the Ceaușescu administration for political reasons.

In his book, The Devil in History, scholar Vladimir Tismaneanu refers to Ceaușescu’s government as a “baroque synthesis of Communism and fascism.” Many of Romania’s troubles have been attributed to its geographical location, close to other, stronger powers such as Russia. Ceaușescu’s Romania had a very low standard of living. The secret police were exceptionally brutal, and the dictator’s opponents tended to end up in psychiatrist hospitals, in prison, or dead. Over a decade later, at the time the play takes place, living conditions had continued to deteriorate. It is easy to understand why America seemed like the perfect escape.

Charlie, the American, turns out to be mild-mannered, intelligent, and slightly kinky. Although well-meaning, he’s anything but romantic, which drives the sensitive Daniela up the wall. Cook portrays Charlie as oblivious to Daniela’s needs but glad to accept whatever she can do for him.

The “waxing” in the title refers to skin waxing, a very painful process that removes hair from skin. It is part of Daniela’s profession as a cosmetologist. She even waxes Charlie’s sister Gloria, a strong-minded gay woman who is described as an artist. Jenna Rossman gives an expertly nuanced performance as Gloria, who is attracted to Daniela but ultimately frustrated by her passivity

Daniela’s good nature, despite some character flaws, which I won’t ruin by revealing, makes her struggles increasingly poignant. When Charlie turns to his computer, she feels ignored. She doesn’t like to cook for Charlie, and she doesn’t like Romanian food. Her one friend, Uros (the admirable Frank Mancino) is a homeless former professor from Yugoslavia with whose dream is to follow in the footsteps of Gilgamesh. Uros has an eccentric eloquence, and the two connect, due to their similar tragic backgrounds. Her efforts to help him are touchingly naïve.

She is haunted by the ghosts of the executed Nicolae and Elena Ceaușescu, who have, unsurprisingly, become vampires. As played by Nahm Darr and Alani Kravitz, they are charmingly nasty, singing, dancing, and itemizing Daniela’s weak points with relish. They lend a Cabaret-like atmosphere to Daniela’s most frightening nightmares.

The Ensemble, Morgan Sendek and Kiernan O’Brien, enact their diverse roles with energy and enthusiasm. Despite the dark subject matter, there is plenty of humor. Friend’s direction is a shining example of how to do more with less. Focus on the story, and the technical aspects will take care of themselves.

Kaitlin Tinsley’s lighting and Nathaniel Sharer’s scenic design blend together well. Director Jordan Friend is also responsible for sound design, which includes some lovely jazz as well as contemporary songs. If I am not mistaken, the cast sings John Denver’s Take Me Home, Country Roads in what I can only assume is Romanian. The costumes, by Greg Strasser and Emily Crockett are well suited to the mood and the material. The dancing (choreography is by Paige Washington) is one of the most enjoyable aspects of the evening.

4615 Theatre Company brings us a fine and funny production in their new home. Not only is it an excellent entry in the Women’s Voices Theater Festival, it highlights the dilemmas many immigrants face in a time of increasing xenophobia. 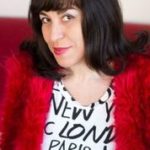 Saviana holds an MA in Performance Studies (Fulbright fellow), MFA in Dramatic Writing (John Golden Award for Excellence in Playwriting) from NYU, Tisch; PhD in Theatre from UNATC, Bucharest, Romania. She has taught Playwriting and Theatre/Performance Studies at NYU, Strasberg, Fordham, ESPA. Currently, she teaches Playwriting and Contemporary Theatre at Ithaca College and is a Regional Visiting Fellow with the Cornell Institute for European Studies.