As the Great American Songbook continues to recede from its long-held prominence, productions such as the In Series All the Things You Are: Jerome Kern are priceless for those who want to hear the musical standards they know and love in a live setting.

For those who want to better discern the musical “standards” that they have come to appreciate from, say, a recorded Tony Bennett-Lady Gaga duet; well, what is better than to discover such music in a comfortable setting?

As Carla Hubner, artistic director and founder of the In Series wrote in her Kern revue program notes, there is a “responsibility to share and preserve this precious [American Songbook ] legacy” that the In Series aims for.

So why the American Songbook and Jerome Kern? With recognizable, hummable melodies, pop music structures, and sophisticated lyrics, a composer such as Kern wrote many of the recognizable standards of early-to-mid-20th Century Broadway show tunes and Hollywood big budget musicals. His work was sought after and listened to for decades. His tunes have been covered by a multitude of the 20th Century’s best singers.

Then as changes in generations have taken hold, with increasingly major demographics transformation in the American population, with the sea change that television, radio stations and now social media have made with audience access to many different musical genres, the decades-long run of the Great American Songbook is fading.

Off the top, what is special about the In Series All the Things You Are: Jerome Kern, is that it reminds us that works of Kern are not musty, dusty, nostalgia for Boomers and those who may recall something from a long-ago SNL skit; I sing old songs for you, ‘Cause I can’t do what’s new!

With its respectful, tastefully curated panoramic sweep through 40 of Kern’s compositions, both “evergreen” musical numbers and some lesser known, Kern’s tunes are given a very grounded presentation thanks to the polished singing talents of a six-member cast including Cornelius David, Suzanne Lane, Jarrod Lee, Garrett Matthews, Elizabeth Mondragon and Krislynn Perry with arrangements and the fine piano work of Reenie Codelka.

So, who was Jerome Kern, anyway? Kern (1885-1945) was an American composer considered to be a bridge between the Viennese/European composing traditions that were carried over to America in the late 19th Century/early 20th Century and American popular style that took hold in American cities such as Ragtime and other American-born music such as jazz. Kern wrote more than 1000 songs for over 100 stage scores and films. He collaborated with the leading librettists and lyricists of his day. His historical importance can even be seen this way. Not only did he win two Academy Awards, but was even celebrated with a 1985 First Class stamp issued in his honor.

The 40 songs selected by Codelka and director Brian J. Shaw for All the Things You Are: Jerome Kern run a wide gamut full of joy and sadness about love and life along with a number of lighter and some just plain silly pieces performed with vamp and camp. The curated mix had balance though I enjoyed the more wistful numbers in the performance I attended (the Government shut-down was still in effect). The music numbers are performed in solos, duets and company numbers. While the musical numbers connections to one another can be a little iffy and not provide a clear theatrical arc to the musical revue, they do provide a terrific sense of Kern and the times he inhabited.

In looking over the program with its song list providing dates for a composition, I was struck by the changes not only in Kern’s musical work, but the power events in the outside world must have had on him. I began to group songs into those first heard right after WWI, the Depression era and songs of the WW II period.

There were post WWI songs about vets returning to America such as “Look for the Silver Lining,”(Company), the rise of the Roaring Twenties and six numbers from the ground-breaking 1927 Showboat [which opened in Washington DC’s National Theatre in November 1927] with lyrics by Oscar Hammerstein II such as “Ol’ Man River” (Jarrod) to “Can’t Help Lovin Dat Man.” (Krislynn).

Moving to the WW II period and how the war impacted America; well know that Kern composed “The Last Time I saw Paris” in 1940 just after the Nazi’s marched into Paris in June 1940 (now used as a vapid background instrumental by Starbucks). Other tunes from the war years when so many loved ones were separated from one another included the haunting “Long Ago and Far Away” (1944) with lyrics by Ira Gershwin (Company)

And the coda to the evening was the Company’s take on “All the Things You Are” (1939) that so many have covered over the years and was such an anthem for GI’s away fighting in WWII.

Let me add that the In Series also provides a theatrical look to the production. This is no “stand-up-and-sing” revue. There is a nicely accomplished scenic design rendering of a hotel, with three distinct play areas created by Jonathan Dahm Robertson. Well-done, mood-setting lighting from Marianne Meadows is terrific.  She has a way with magenta and turquoise colors and washes. Costumes by Donna Breslin are different for each Act. Act I is all hotel Bell Hop and maid attire along with early 20th century outfits for “guests.” Come Act II there is a complete transformation into formal attire with black tails for the men and gowns for the women. A welcome change; but left me a bit befuddled when songs from the gritty emotion-packed Showboat were sung. The simple movement routines devised by Tammy Roberts for singers turned dancers added some visual interest, including one brief tap duet.

So, if you are looking for a stylish musical night out in the company of fine singers in the comfort of the Atlas Theatre’s The Paul Sprenger Theatre, then do try the In Series All the Things You Are Jerome Kern. For you, the memories may linger on, as you take in a bite to eat before the show on bustling H Street and perhaps a drink after.

Running Time: About 90 minutes, with one intermission. 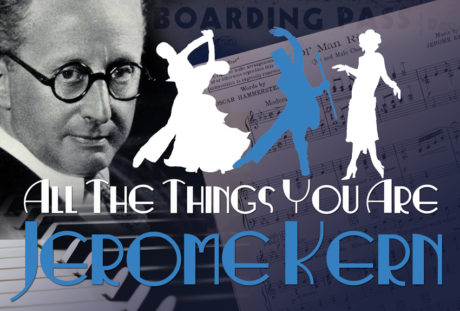