This year’s Women’s Voices Theater Festival features 24 plays, four of which are adaptations. Three are based on works by great male writers—Shakespeare, Congreve, Ibsen—and one is based on the work of a great woman writer: The Lathe of Heaven by Ursula K. Le Guin. The renowned fantasy fiction author died Monday at the age of 88.

The Lathe of Heaven has been adapted for Spooky Action Theater by Playwright and Director Natsu Onoda Power, associate professor of theater and performance studies at Georgetown University. At the invitation of DC Theater Arts, she and Spooky Action Artistic Director Richard Henrich shared their tributes to the author who inspired them.

I hope this note finds you well.

Having lived with your book The Lathe of Heaven for the last two years, I somehow do not believe that you are gone. I feel that you have just slipped into another version of reality. In this reality where I am currently living, we have never met in person, or spoken. Yet I have a distinct memory of talking to you every day, sitting with you, hearing your voice first thing in the morning. Your words have become my obsession, they have shaped my world, and crafted how I see things.

I remember how we met. Richard Henrich introduced us in July 2016. He sent me an email: “As I think of projects I need to do, I keep coming back to The Lathe of Heaven by Ursula K. Le Guin,” he wrote.  “Do you know it?  I got the author’s permission to adapt it for the stage at the time my theater company was just getting started.  At that point we did not have the experience or the resources to really do it justice, and it is an evocative story I would love to revisit.”

You have been with me ever since. Do you remember November 2016? The day I thought my worst nightmare had become reality. And summer 2017? Something had gone terribly wrong in this reality. One evening, I was driving home, sitting in what seemed to be eternally lasting traffic, listening to the radio. There was so much sadness, so much hatred, so much violence. When I got home I could not get out of the car. I just sat there and sobbed. Then I remembered you were in the passenger seat. When I turned to you, you said: “Rocks have their dreams, and the earth changes. . . . But when the mind becomes conscious, when the rate of evolution speeds up, then you have to be careful. A conscious mind must be part of the whole, intentionally and carefully—as the rock is part of the whole unconsciously.” I didn’t fully understand what you meant, but you proceeded to lead me, by hand, out of despair. And out of my car. I had puppets to build. A book to adapt.

Maybe by the end of the run of this show, we will have entered another reality and you will be sitting in the audience. Or on stage playing the part of an alien (you know all the lines already). In any case I think I still need your help. And I know you will always offer it to me.

A Note for Ursula K. Le Guin by Richard Henrich

Yesterday, on my way to dress rehearsal for The Lathe of Heaven, I learned the novel’s author, Ursula K. Le Guin, has died.  A year ago I reached out to her about adapting her classic tale of speculative fiction for the stage.  With remarkable generosity, she granted us an unrestricted hand in seeking a theatrical equivalent for her story—a fantastic tale that glimmers and shifts like quicksilver through surprising, unexpected changes.

Grateful for her generosity, we planned to share the script and visuals to document the astonishing energy and innovative staging of our play with Ms. Le Guin.  We almost had the time.

Le Guin’s recent collection of essays, published a month ago, is titled No Time to Spare: Thinking About What Matters. Going over 80, with a long and fruitful literary career to look back on, the author is remarkably rooted in the ongoing present while maintaining a perspective as broad as the vast universes she created in her fiction.  There are many admirers who honor Le Guin as a prominent voice for feminism and the Women’s Movement.  For me, a man, she is much more.  A common thread through her writing is the dynamic pairing of principles of male/female, earth/sea, light/darkness that permeate our experience and all we know.  She eloquently speaks to an imbalance that often exists in this dynamic, and the need to right the balance if we are to survive.

Ursula K Le Guin, as I know her in her work, is one of the most balanced people I have met.  From The Lathe of Heaven, I take the thought that creating a dynamic balance between fundamental principles is a work of love.  Le Guin says of making love, “Love doesn’t just sit there, like a stone.  It has to be made, like bread.  Re-made all the time, made new.”  I feel our director, actors and designers have all been drawn into this making.  The story of The Lathe of Heaven has been with us for decades, and today we are re-making it once again, making it new.  For her generosity of spirit and her vision, I am ever grateful to Ursula K Le Guin.  And with our theater company, I embrace the opportunity she has granted us to make something truly ageless new again. 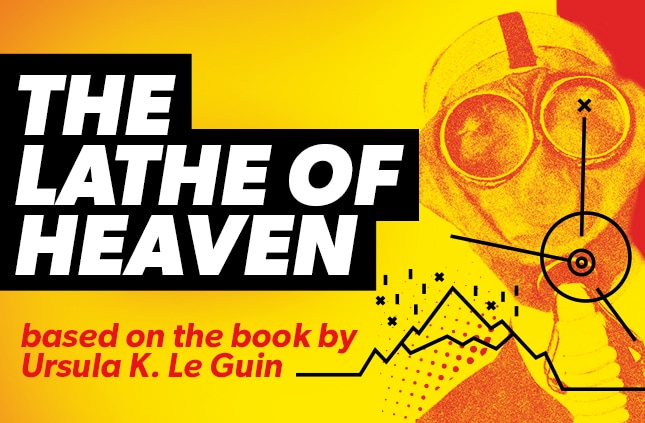 The Lathe of Heaven will be performed January 25 through 27, 2018, at the Devine Theater in Georgetown University’s Davis Performing Arts Center – 37th & O Streets NW, in Washington, DC. Tickets may be purchased online.