In the first decade of the 20th century, on a farm in the tiny village of Avonlea, in Canada’s smallest province, Prince Edward Island, a brother and sister realize they need help to sustain their family farm, Green Gables. When they try to adopt a boy to help around the farm, they accidentally get Anne Shirley instead, whose mischievous spirit and boundless energy make her a force to be reckoned with. The musical Anne of Green Gables is adapted from the well-loved novel by L.M. Montgomery, with a book by Donald Harron, and music written by Norman Campbell. 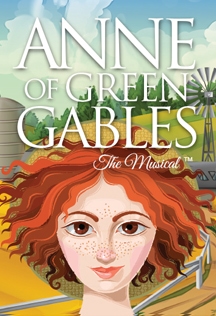 Matthew and Marilla Cuthbert are the aging brother and sister who order a boy to help around the farm. When Anne unexpectedly arrives instead, Matthew (a thoroughly endearing Tony Gilbert) is touched by her earnestness and appreciation for being wanted. His sister Marilla (played believably by Michelle Ballard) is more practical and slower to warm to Anne, who she doesn’t believe can meet the needs a boy was supposed to fulfill.

While the actors playing the siblings are among the many excellent performances, Cassie Cope is great fun in the title role of Anne. Anne is spunky and sassy, fearless and lovable, and Cope embodies the role.

Although it takes an hour before they are onstage, the show’s energy clicks up a few notches once the younger cast members appear. Anne makes a friend her age, the irrepressible Diana Barry (played by Anna Maria Shockey) and goes to school, meeting her fellow students (a terrifically talented cast of young actors).

In the classic romantic trope, Gilbert Blythe (Christopher Miller) messes up his chances with Anne on the first day they meet and spends the rest of the show trying to patch things up. Miller brings a lovely tenor to the ballad, “Wondrin.’” The rest of the kids help end the first act with the energetic dance numbers “Ice Cream” and “The Picnic.” Their dancing is one of the show’s highlights and choreographer Cristina Cayere helps them look perfectly at ease with very athletic movement.

A physical acting choice that was impressive and hilarious was when Shockey, playing Diana, drains the last drop of a tasty glass of cordial by arching backwards until her hair is bouncing on the floor behind her.

There is a bold choice made by director Michael J. Baker and set designer Mary Hutzler to use video projections (produced in a partnership with Visual Arts Video Production) near the start of the show. While the women of the town of Avonlea are singing the opening number, “Great Workers for the Cause,” a horse-drawn buggy moves through the woods to pick up Anne at the train station. The buggy ride is projected onto a screen on one side of the stage. Film is generally a very realistic medium and the rest of this show was relying on the audience’s imagination, which is one of theater’s strengths.

While the video was beautifully filmed, the cinematic feel to that portion felt out of place and unnecessary. The two-floor Cuthbert house is imaginatively shown with green gables above the roofline. Most other scenes took place on the other side of the stage or in front of the traveler curtain.

The music written by Norman Campbell is well sung, and lyrics are often touching. Matthew’s struggles to say what he feels in “The Words,” brings to mind those salt-of-the-earth types who don’t have experience sharing deep feelings. The reprise sung later by Marilla is also especially moving. The backstage orchestra, conducted by Colin Taylor, supports the actors’ songs, set the tone, and helped move the transitions between scenes.

Running time is 2 hours and 50 minutes with one 15 minute intermission.

Ann of Green Gables plays through Feb. 3, at Little Theatre of Alexandria at 600 Wolfe Street, Alexandria, VA 22314. Purchase tickets at the box office or online.