4,380 Nights is a raw, emotionally charged political theater production that makes the movie Zero Dark Thirty look timid. That is my trigger warning about a new play by Annalisa Dias that explores issues surrounding aftermaths in our post 9/11 world.

4,380 Nights provides a willing audience the opportunity to more than just ponder in the safety of an academic setting or at a small dinner party with like-minded close friends, plenty of real issues about power, history and what makes some folk do what they do. Can any of us become situationally xenophobic? These are some questions that playwright Annalisa Dias grapples with.

So, what is Dias’ 4,380 Nights about? Signature marketing material provides this synopsis: “For the last 12 years, or 4,380 days, Malik Djamal Ahmad Essaid has been held without charge by the United States government at the Guantanamo Bay Detention Center. As he languishes in his cell, his interactions with those on the outside are juxtaposed with historical events in a riveting exposé into the most dangerous prison of all—fear.”

Under the confident, forceful direction of Kathleen Akerley there are no hiding places for either the cast or the audience from a production with the prickly mien provided by Dias. Akerley has her four-member cast give performances that are unnerving. (especially the marvel of Ahmad Kamal in two roles; that of Guantanamo detainee Malik Essaid and as 19th-century Algerian Berber leader named El Hadj El Kaimand; and Michael John Casey in the role of Bud Abramson, a Jewish lawyer trying to help Essaid during his more than a decade detention).

Most often the audience is met with scenes of Kamal as detainee Essaid chained up, responding to others as he attempts to protest and project his innocence. Will no one believe him, even as some unlikely coincidences pile up making him seem not so innocent? Will punishment and worse make him confess “the” truth of his supposed crimes?

Then there are gentle moments when actors Kamal and Casey sit together at a metal table with little physical action between them, and not a whole bunch of dialogue, their vivid facial expressions give off power of individual character. Kamal, as detainee Essaid, shows a wide range of emotions; bewilderment, hate, fear, pain, and a simple longing for decency and human connections. In characters, both Kamal and Casey, are men hungry for a modicum of humanity as their characters try to deal with the most nightmarish of situations. In seeking-out some humanity, two particular scenes stood out. One scene involves the sharing of food. The other highlights the Job’s story in Islam in parallel to the Hebrew Bible story of Job. Both scenes are moments of exquisite beauty and decency and acted with such tenderness.

Rex Daugherty takes on two roles as well. Both are military men who have little regard for others. Dougherty is a ram-rod straight shooter American named Luke Harrison who knows how to punish, demean and humiliate. As a 19th French officer named Colonel Aimable Pelissier trying to “pacify” Algeria tribes, Dougherty becomes a character who demands a high body count, no matter what the cost to his own humanity and those he orders about.

And there is Lynette Rathnam in the role of “The Woman.” She is the play’s storyteller and Greek Chorus. She connects history, myth, and personal situations through poetic words spoken with strength and bearing. Her words and petite physical presence are calculated to become even more unsettling than the males’ bravado.

Rathnam’s character, however, is also given a difficult task; to poetically describe actions, dreams and historical connections and many a back-and-forth of North Africa’s history with Rome, France, and the United States. That is no easy task and is not always accomplished easily, unless one knows some of that history before entering the theater. It is one of the flaws in the Dias script. There is a packing of too much into the proceeding; too many historical antecedents, a few too many off-ramps that take away from the play’s main territory and overall punch.

Signature’s ARK venue set for 4,380 Nights uses a backdrop of hundreds of chain links hanging down bearing witness to the close quarters of a prison (Elizabeth Jenkins did the set). Two side areas are not play spaces but places of observations for actors to watch the main action. Sound designer Neil McFadden fills the set with constant sound so the audience begins to feel how difficult sleep could be. And John Burkland often enough brings klieg-like lighting to bear. There is no place to hide in the intimacy of Signature’s ARK. Heather Lockard’s costume design is more than prison orange jumpsuit attire, especially for Rathnam who takes on the aura of Roman statuary or perhaps the French symbol of freedom, Marianne.

Dias and Akerley as a duo (they have worked together before) audaciously dare the audience to look away from 4,380 Nights. At the performance I attended, some tried. I saw people sincerely crying at what was before them especially during an Act I fight scene so well-choreographed by Robb Hunter that I shuddered. I heard folk during intermission discuss how un-nerved they were with the visceral nature of the production; some saying “I want to run away.” I heard others wonder if any of it could be true, that America might do such things, seemed not possible.

As part of the Women’s Voice Theatre Festival, 4,380 Nights gives a willing audience the opportunity to ponder lots including forced feedings and prisoner dehumanization and abuse in a drama that is “a work of revelation” to use words from Dias.

So, some final words. The script by Dias and the confident, focused directing touch of Akerley make 4,380 Nights a compelling “in your face” production. I like that kind of challenging theater. You may not.

I am interested in hearing your take on 4,380 Nights. What are your takeaways? Please add me to your conversation using the feedback section below this article. I can even pass on your feedback and comments to playwright Dias and director Akerley if you want. Let’s have a conversation. How can we resist if we hide from the tough things we are trying to resist?

Running Time: Two hours and 15 minutes, with one intermission.

Note: 4,380 Nights contains adult language and situations, strobe lights, and loud noises. It is suitable for adults only (18+). 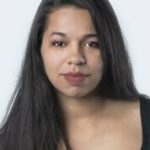 Annalisa Dias is a playwright, performer, and director. Her work has been staged in DC, New York, London, and Glasgow. She is a Producing Playwright with The Welders, a DC playwright’s collective; and is Co-Founder of the DC Coalition for Theatre & Social Justice. Plays include: The Last Allegiance, One Word More, A Legacy of Chains, Servant of the Wind, and To Defend Freedom.