One of the play’s central storylines is the tug-of-war between our protagonist Ollie Thomas’s belief that selling his “colored circus” to Benjamin Boswell (played by Pat Martin), a white man, will help the circus prosper, and the position of others – like Essie “Pumpkin” Barnes – who believes that integrity stands above all else and that giving into Boswell means he will continue to raise the stakes.

We see this theme of survival in the stories of other characters too. Freda (played by Sara Hernandez), is a Mexican woman who resigns herself to pretending to be Native American on stage every night if it means she can save enough money to get to California. Meanwhile, Joseph “Pickles” Barnes (played by Charles W. Harris) agrees to Boswell’s ever-escalating demands for the sake of his livelihood.

Even with many of the 13-member cast often on stage at the same time and the varied subplots, the stage does not feel cluttered and the stories are easy to follow. Clocking in at over three hours, there is not a dull moment throughout the entire production. The expertly crafted storylines and nuanced delivery by the talented cast, under the direction of Courtney Baker-Oliver, draws in the audience and keeps them engaged throughout the show.

The main stage of the Anacostia Playhouse seats 100-120 people and the edge of the stage is a mere couple of feet from the front row. Such an intimate setting would easily highlight imperfections of lesser quality productions, but here, the intimacy lends to the drama of the story, allowing the vulnerability of the characters and the raw talent of the actors to shine through.

The set is designed to look like the inside of a dilapidated circus tent. The tattered burlap hanging from the ceiling and walls makes you feel like you’re underneath a canopy, and the mismatched wicker furniture and hay strewn across the stage makes it believable that there are holes in the tent that the performers cannot afford to patch up.

The 1920’s-style music and original songs (penned by Baker-Oliver, Butler, and Christopher John Burnett) are beautifully woven into the show under the musical direction of Wilkie Ferguson III.

Corisa Myers is a standout as Essie “Pumpkin” Barnes, the matriarch of the circus company. She is stunning whether she’s singing the opening musical number “Good Trouble,” delivering a heart-wrenching monologue, or bickering with her husband Pickles.

Miles Folley and Ayana Reed are riveting as lovers Ollie Thomas and Ruby Dyson. The romance of these multilayered characters is tested during the course of the play (as is evident in Ruby’s moving performances of “Darkies Never Dream” and “I’m a Little Blackbird Looking for a Bluebird”) and culminates in one of the show’s most emotional climaxes.

Nikki Summons delivers comedic relief as Lenora Gardner, the local socialite. Lenora is well-meaning even if somewhat misguided (she, like the other circus-goers, is white, and exoticizes the black circus performers.) She finds herself taking an interest in Colby Boswell (played by Robert Hamilton), the son of the circus owner who struggles to set himself apart from his exploitative father. Lenora’s Washingtonian cousin Daphne Greenberry (played by Katy Chmura) has no patience for the small town of La Plata and is only there to see Lenora compete in the Miss Nicotine pageant. Toward the end of Act I, Daphne, along with Pumpkin and Ruby, reluctantly accompanies Lenora in a tone-deaf but thoroughly entertaining performance of “By the Light of the Silvery Moon.”

At the top of Act II, Tumbler, an endearing circus entertainer with developmental disabilities (played by Marquis Fair) runs away to find his Granny – the reason why he joins Boswell’s circus in the first place is to earn enough money to get back to her. But the show must go on. We get to witness the vocal chops of Brittany Timmons as Madame Zola, the mystical Haitian fortune teller, for the first time in “You Can’t Tell the Difference After Dark.” A nervous Birdie (played by Abiola Yetunde) gets her chance to shine in Tumbler’s absence. Encouraged by William (played by Mandrill Solomon), who she has taken a liking to, Birdie gives an awkward and adorable performance of “I Ain’t Gonna Give You None of My Jellyroll.” Not to be outdone, more (purposely) cringe-inducing numbers follow: Freda in “Mr. America” and Pumpkin and Pickles in “Oh, You Coon.”

The second act has no shortage of emotional scenes that captivate the audience. Female members of the cast lead one of the final musical numbers “There’s a Man Over the River,” filling the whole room with their mesmerizing harmonies.

This Helen Hayes-recommended production is the first script completed by Butler during his time as an Arena Stage Playwright’s Arena Fellow in 2015. It premiered in early 2017 at Restoration Stage (founded by Baker-Oliver and Butler) and returned for a limited encore engagement this month.

The Very Last Days of the First Colored Circus is a must-see when it returns to the DC stage, hopefully in the not-too-distant future. Restoration Stage’s motto is “Restoring the Black Family – One Story at a Time” and Butler certainly does his family proud in telling their story in this production.

Running Time: Three hours and 15 minutes, including one 10-minute intermission. 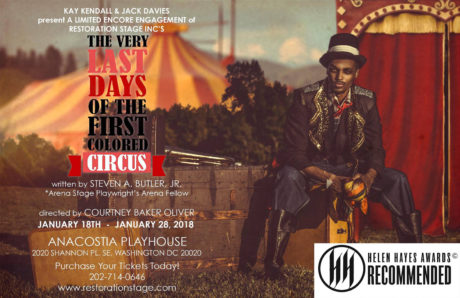 The Very Last Days of the First Colored Circus played from January 18, 2018, to January 28, 2018, at Restoration Stage performing at the Anacostia Playhouse – 2020 Shannon Place SE, in Washington, DC. For information on other Restoration Stage productions, go online.