Despite its off-putting (and overly-clever) title, Digging Up Dessa is a lively and often moving tale of two 12-year-olds who are lost in the middle of a strange new world and trying to find themselves in it.

As in most good children’s stories, they end up finding not only themselves but—thanks to the spirit of a 19th-century paleontologist and a 21st-century song-writing mother—they find something bigger, and more important than expected.

Dessa is the girl whose father’s death has plunged her into deep despair. It’s a loss that’s only worsened by the fact that her mother’s new job—as a writer of advertising jingles—forces them to move to a new city and a school that feels totally alien. Nilo is one of the aliens. He’s a boy whose father is perpetually disappointed in him, and who wears failure like a cloak.

Of course, Dessa and Nilo—like many children their age—consider themselves outcasts. Dessa, who wants to be a scientist, is lonely. Nilo, who wants to be a sound engineer (instead of an Ivy League lawyer like his father), believes himself to be a loser. Both are angry and frustrated.

Happily, they are saved by a kindly school teacher who “punishes” them by assigning the two to dig for fossils in a construction site facing Dessa’s new home. This is not a coincidence since Dessa’s idol—and mentor in this play—is Mary Anning, the pioneer paleontologist who identified the first dinosaurs.

Mary, in this play, is more than a spirit. She is Dessa’s invisible friend, inspiring the girl to redeem her reputation—and that of all other women scientists in the process—but also to follow the strict scientific method of proof. Dessa’s mother, Esther, is the other inspiration in this play. She’s all too visible—often seen typing or playing her ukelele at the kitchen table—and audible, too, as she sings melodies that aim to instruct.

Digging Up Dessa, which is one of roughly two dozen productions in this year’s Women’s Voices Theater Festival, was commissioned by the John F. Kennedy Center for the Performing Arts as part of its Theater for Young Audiences program.

Dessa certainly fits the Women’s Voices parameters, aiming to combine entertainment with the high-minded goal of reminding girls (and boys) that yes, you can become a scientist! Or a sound engineer!

That’s a tall order, but this world premiere production has the good luck to feature a fine director—Rives Collins, who is a professional storyteller—and four talented actors, capable of bringing sadness and joy, laughter and determination, to what might otherwise be a too “preachy” show.

Alina Collins Maldonado (last seen in El Paso Blue at GALA Hispanic Theatre) brings plenty of spunk to the role of the girl scientist who is furious at her well-meaning mother. And Alyssa Wilmoth Keegan gives us a lovely portrayal of the mother who is trying to protect her daughter by hiding the truth.

Keegan’s songs—ranging from the elegiac notes of “We Used To Be Three” to an ode to paper towels—are a lovely touch, breaking up the sometimes talky dialog with music by Deborah Wicks La Puma.

The role of Mary Anning is played to perfection by Jackie Reneé Robinson and Chris Stinson is delicious as the “bad boy” Nilo. Of course, Nilo is more fun when he’s naughty, and the audience is never happier, in this play, then when our 12-year-old hero smears dirt all over his dazzling white clothes. (While the play is described as “most enjoyed by ages 10 and up,” there are quite a few sight jokes that will keep younger theater-goers entertained.)

Deb Booth has designed a wonderful all-purpose set, with a museum exhibit –consisting of lighted cabinets full of fossils- at the back, and a large sandbox at the front. Esther’s kitchen table is off to one side, allowing her to type or sing while the young people dig. Audrey Bodek is responsible for the props, which include the requisite hammers and chisels.

Images of the seaside in Dorset—where Mary Anning did all her digging—and the fossilized parts of the dinosaurs and woolly mammoths to which they belonged—are projected on a screen. Patrick Lord’s projections and Martha Mountain’s lighting both help to identify past and present, time and place.

Mary Anning’s costume—complete with bonnet and bustle—is straight out of the history books, and Nilo’s white suit is funny, with or without the dirt. Thanks to Jen Gillette for providing these outfits, as well as Esther’s vaguely “artistic” attire.

One of the most surprising elements in this production is the use of sound. Kenny Neal has created a moving backdrop of seagulls squawking, thunder and surf. It’s a subtle gesture, reminding the audience of the beaches on which Mary walked, and where Dessa may sometimes go.

Digging Up Dessa is written by Laura Schellhardt, a prolific and multiple award-winning playwright. Grace Overbeke is the dramaturg. Most helpful, however, to audiences—children and grown-ups alike—is the Kennedy Center’s Cuesheet Performance Guide. Distributed along with the Playbill, the Guide is an excellent teaching tool, amplifying the message of the play and filling in some of the information that’s unclear. 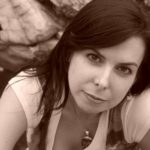 Laura Schellhardt is a Chicago-based writer whose original works include Ever in the Glades, The Comparables, The Chair, The K of D, and Shapeshifter. She is a recipient of the TCG National Playwriting Residency, the Jerome Fellowship, ACT’s New Play Award, The AATE Distinguished Play Award, and a Dramatist Guild Playwriting Fellowship.