An evening of wordplay on the meanings and messages of Modern art awaits audiences at All She Must Possess. This is another worthy world premiere from the venturesome Rep Stage Company at Howard Community College.

Playwright Susan McCully adds her voice to the ongoing Women’s Voices Theater Festival with this often wry take on Baltimore’s Cone sisters — amassers of one of the world’s first great collections of Modern art.

In a way, Producing Artistic Director Joseph W. Ritsch is expanding the art history lecture begun at Rep Stage last fall with The Heidi Chronicles. If that was a look at the process of becoming, this new work is a peek into process itself.

The process, in this case, centers on a present-day female Writer (a suitably student-like Keri Eastridge) who is attempting to herd onto a stage her collected impressions of the two Cones and their circle of eccentrics. The characters often balk at what they are being asked to do, and engage in much spirited banter with the Writer over her answers to some of the questions their lives raise.

The always-amazing Valerie Leonard plays Claribel Cone, the no-nonsense older Cone sister and a pioneering female physician of the Edwardian Age. In the 1920s she left her medical practice altogether to devote herself to the visionary school of art represented by such renegades as Pablo Picasso and Henri Matisse.

Grace Bauer is equally believable as the submissive Etta Cone, who lives largely eclipsed by her dominating big sister. She may have been the real force behind the two of them becoming such devout patrons, and McCully places her at the center of her play. She even implies that Etta was in line to become Gertrude Stein’s chief female consort until being cast aside for Alice B. Toklas.

All She Must Possess hasn’t much interest in dramatizing the emotional peaks and valleys of these human struggles. When Etta upbraids the Writer for daring to probe her sexual orientation at one point, the Writer tellingly backs off. Etta certainly has a right to privacy, but one expects a play about her to dig into the dynamics of personality.

How greatly did Etta resent living in her sister’s shadow? What is it that drives some people to possess the things they appreciate, and causes others to reject companionship altogether? The play denies itself the artistic license to stray enough at times.

As good as Valerie Leonard is as Claribel, the actress is even better as Gertrude Stein. When she is on stage she becomes the Dowager Queen of Literary Enigmas, threatening to steal the play right from under the Cones’ noses.

Rep Stage’s versatile, Helen Hayes Award-winning actor Nigel Reed is stuck in the under-developed roles of both Henri Matisse and Leo Stein. Apart from giving Matisse a dubious French accent, Reed has little to build a character around here besides an unceasing solicitude toward his patrons. That tends to diminish the thing that attracted the Cones to him in the first place – an insistence on his own authority.

Teresa Castracane manages to give some interesting angles to the two-dimensional painting of “Blue Nude” and to another of the work’s one-dimensional portraits, Alice B. Toklas.

Director Joseph W. Ritsch knows how to wring all the humor out of the Pirandello-esque breaking of theater’s fourth wall. His fluid blocking always ends with just the right stage picture on Daniel Ettinger’s gallery-wall set.

Lighting Designer Conor Mulligan clarifies each shift in time and perspective, while the projected images of Sarah Tundermann contribute greatly to the visual interest of this mostly cerebral drama.

Chalk up another intriguing title in the impressive roster of new works at Rep Stage. If high-minded talk of art theory and philosophy intrigues you, hurry to pick up one of the fast-disappearing tickets for this limited run.

Running Time: About 75 minutes, with no intermission.

All She Must Possess plays at Rep Stage through February 25, 2018, in the Studio Theatre of the Horowitz Visual and Performing Arts Center at Howard Community College — 10901 Little Patuxent Parkway, in Columbia, MD. For tickets, call the box office at (443) 518-1500 or go online. 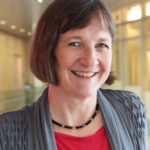 Susan McCully is a scholar of feminist theatre and a dramaturg, as well as a playwright and performer. Susan is the artistic director of the Grrlparts festival at UMBC. Her play Kerrmoor was part of the last Women’s Voices Theater Festival.