Imagine this: it is the night before Christmas. A silent snow blankets New York City, and inside a spare living room, a woman dozes in front of her Christmas tree. Her adolescent son snuggles into the sharp lines of his mother’s body, which has softened to keep him close. The glow of his phone illuminates their faces. Choral music – a hymn – plays in the background. They wait: not just for midnight, so that they can break their fast, but for so much more. 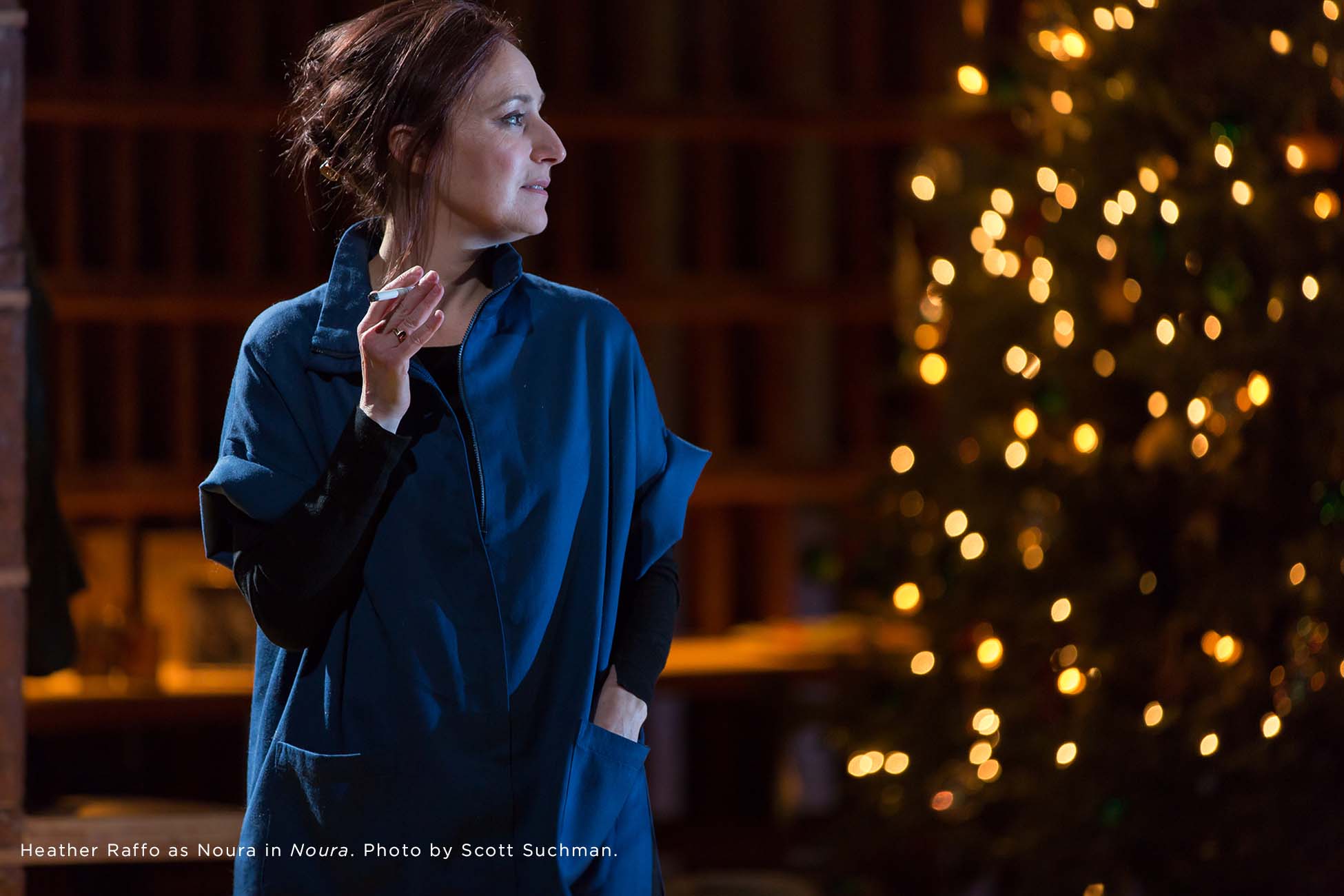 This is just one moment of everyday beauty in Heather Raffo’s Noura, a new play premiering at Shakespeare Theatre Company. Raffo, who both wrote and stars in her take on Ibsen’s A Doll’s House, tells the story of an Iraqi-American family who welcome an Iraqi refugee into their home for Christmas. Noura, the protagonist, is a non-practicing architect who hopes that Maryam, a young woman from Noura’s home city of Mosul, will bring Noura’s family the solace that has eluded them in the United States. But Maryam’s idea of solace is starkly different from Noura’s own, and their conflict threatens to unravel the life Noura, husband Tareq, and son Yazen have carved out for themselves in New York City.

Raffo’s script bounces effortlessly between humor and strained arguments. It’s one of the most realistic plays I’ve seen in the last few years: every scene feels possible. Tareq quotes Taylor Swift’s “Shake It Off,” Noura nags Yazen to put down his PlayStation controller, Maryam snaps at Noura when she’s different from her online persona (“you didn’t seem conservative on Facebook!”). What sets it apart from everyday conversation is that Raffo has a natural feel for the rhythms of language and can make a single word carry the weight of a hundred sentences. In the first scene, Noura tells Tareq not to call her “Nora,” which is what her new American passport says. (Tareq’s says “Tim.”) “Noura,” says Tareq, drawing out the vowels, savoring them, smiling. “Noura.” He almost sings the word. “Noura.” He puts his arms around her. That one word gives an intimate portrait of Noura and Tareq’s relationship.

The production features stellar acting in the three key roles. Raffo has a taut elegance as Noura. She ably carries the show, moving around the stage with nervous energy so intense she practically vibrates. Nabil Elouahabi is masterful as Tareq, Noura’s affable husband whose calm exterior covers up a shadowy knot of trauma, fear, and sexism. Matthew David brings comic relief and wisdom in equal parts as Rafa’a, the Muslim best friend of Christians Noura and Tareq. Dahlia Azama (Maryam) and Gabriel Brumberg (Yazen) also deserve praise as the younger characters.

Director Joanna Settle has shaped the raw talent of her actors into well-paced scenes that never miss a beat. Every movement and every line feel intentional. Settle is helped by the show’s technical elements, especially Obadiah Eaves’ sound design, which is an example of how ambient sounds can heighten a scene instead of confusing it. Choral music and Christmas songs often play in the background, but never compete with the actors’ voices for the audience’s attention. Masha Tsimring’s excellent lighting, like Raffo’s script, makes a New York City living room into something extraordinary. Tsimring’s lighting design works in perfect harmony with Andrew Lieberman’s set so that the lamps scattered around Noura’s house seem to glow, illuminating the actors’ faces seemingly from right beside them rather than above them.

The smooth, slatted curve of Noura’s living room wall cuts across the entire stage, enveloping Noura and her family as if they’re inside a conch shell. This is a lovely way to render both Noura’s architect dreams and her wish to go back to an Iraqi-style house. She tells Rafa’a that she misses their childhood homes in Mosul, which were built around a central courtyard so that inhabitants walked a circular pattern through the home. It meant families were closer, Noura says, but also cut off from the world on the street. She casts a glance towards her own wall, through which the distorted shadows of other characters often appear.

The set takes on greater significance here than it might in other plays, because Mosul doesn’t exist anymore – at least, not the Mosul that Noura remembers. The city has withstood some of the most intense fighting between ISIS and its coalition of enemies (including the United States), and between 9,000-11,000 have died. Maryam barely escapes Mosul with her life. Noura, like its fellow Women’s Voices Theatre Festival production Sovereignty, is a political show that could not be more timely in 2018. But the show never buckles under the immense weight of the pain Iraqi refugees have carried. They have faced war, and prejudice, and death, and battles to citizenship in countries all over the world. Noura pulses with this pain as its lifeblood and uses it to connect with the audience. The audience can’t help but feel something.

Or at least, I did. As the final scene unfolded, my friend and I gritted back tears. Our first move, after the cast took their well-deserved bows, was to hug each other. We stood there, in the aisles of the theater, and tried not to sob. We were crying for Noura and all the Nouras of the world. We were crying because many people in our country do not want families like Noura and Tareq and Yazen. We were crying because, if the current administration passes the immigration package it has proposed, Noura would probably have never made it to her conch-shell living room in New York City. And we were also crying because we had heard gorgeously-strung dialogue that built to an electrifying climax.

What else can I say? Noura is transformative. Go see it.

Running Time: One hour and 45 minutes, with no intermission. 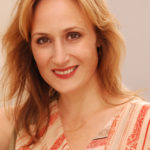 Heather Raffo is an award-winning playwright and actress whose work has been seen Off-Broadway, off West End, in regional theater and in film. She is the author and solo performer of the play 9 Parts of Desire (Lucille Lortel Award, Susan Smith Blackburn commendation, Drama League, OCC, Helen Hayes nominations), which the New Yorker called “an example of how art can remake the world.” The play ran Off-Broadway for nine months and has played across the United States and internationally for over a decade, with current productions in Greece, Hungary, and India.

Most recently, her libretto for the opera Fallujah was heard as part of Kennedy Center’s International Theater Festival. It then received its world premiere at Long Beach Opera in March of 2016 and opened at New York City Opera later that year. A film was made of the opera, as well as a documentary titled Fallujah: Art, Healing and PTSD.

Heather’s newest play, Noura, just won Williamstown Theatre Festival’s prestigious Weissberger Award. Noura came out of three years of workshops with Arab American women living in New York City, where Heather explored the themes of identity and belonging through her personal narrative initiative titled Places of Pilgrimage. In response to the participants’ many harrowing stories of leaving home, Heather shared with them Ibsen’s A Doll’s House. In tackling the iconic character of Noura, Raffo’s workshop provided a rare opportunity for women to discuss the contemporary challenge of being a modern woman who must bridge ties to both America and the Middle East. Noura was further developed at Georgetown University’s Laboratory for Global Performance and Politics with refugee and Middle East policy experts. Further workshops were supported by McCarter Theatre, Epic Theatre Ensemble and our nation’s first Arab American Museum in Dearborn, Michigan. Noura will receive its world premiere at the Shakespeare Theatre Company in D.C. in February 2018, before traveling to the Middle East for production in Abu Dhabi.

Raffo is the recipient of multiple grants from the Doris Duke Charitable Foundation to use theater as a means of bridge-building between her Eastern and Western cultures. She continues to grow her storytelling workshop, Places of Pilgrimage, taking it to universities and community centers both in America and the Middle East. Clips of participants’ work from her New York workshop have been shared online through the organizations Bridges of Understanding and Refugees Deeply, as a means to connect the stories of young Middle Eastern women with their peers globally. Raffo continues her focus on cross-cultural work by speaking at universities across America and internationally. Her work has taken her from classrooms in Tampa to the U.S. Islamic World Forum in Qatar, and from the Mercantile Library in Cincinnati to the Rumi Festival in Oslo. She is a proud member of Epic Theatre Ensemble’s Artistic Advisory Council and to her decade-long collaboration with Georgetown’s Laboratory for Global Performance and Politics.