Hobson’s Choice is a winner. The play – a sparkling comedy with a terrific cast – just opened at the Quotidian Theatre Company, a jewel of a playhouse tucked into the rear of the Writer’s Center in Bethesda. And it’s a production as dazzling as it is unexpected.

In fact, this revival of a century-old Broadway hit—set in the 1880s and first staged in 1916—is as fresh as if it had leapt off the page today.

Directed by David Dubov, Hobson’s Choice is a modern tale in Victorian dress. It’s about women demanding respect and workers begging for a decent wage. Echoes of the “me too” movement and the income gap are abundant.

Like the rest of its sold-out audience, I found myself laughing out loud and roaring approval at some of the right-on tirades in this satire on the wars of gender and class.

Hobson, for those who’ve never seen the play (or even the 1954 David Lean film, starring Charles Laughton), is the owner of an elegant boot-making emporium, located in the best part of Salford, outside Manchester, in Lancashire, England.

Although Hobson is incompetent—he spends most of each day at the local pub—the shop itself is a success. That’s because of Maggie, the oldest of his three daughters, who runs the shop, and the boot-maker himself, who turns out to be a talented, but timid and poorly-paid worker.

The transformation of the boot-maker, Will Mossup, from cowering hired hand to confident businessman and gentleman, is a joy to behold. It’s a tribute to the comic talent of Matt Baughman, who has incorporated a lot of mime—and the persona of both Marcel Marceau and Charlie Chaplin—into the role.

Both Baughman and White are breathtaking, especially as they lash out at each other in a scene as shocking as fireworks. Gradually each assumes the other’s role, the quivering worker managing, ultimately, to stand up for himself while the pompous (and increasingly red-nosed) drunk dissolves into a puddle of self-pity and fear.

The miracle-worker in charge of this transformation is Maggie, who is played with commanding perfection by Rebecca Ellis, ordering everyone—including the hapless Will—to do her bidding.

Ironically, it is Hobson himself who sets his own downfall in action. He dismisses Maggie—who is the unpaid housekeeper as well as shop manager—as an “old maid,” declaring her “unmarriageable” because she is 30.

Carolyn Kashner and Meredith Richard are Alice and Vickey, the two younger sisters who are hilarious in both their vanity and their desperation to get married. Their “work” in the shop consists of flaunting new fashions and flirting with the potential husbands who drop in.

The suitors are Logan Beveridge—a deliciously foppish Freddy, who describes himself as being in “business, not trade,” because he’s a wholesaler—and Nick Duckworth, as Albert, the young solicitor. It is Albert who provides the legal means for Hobson’s undoing. (He is also, to the joy of the audience, the first of the men who agrees to wash the dishes!)

Although the venerable Jane Squier Bruns has only a cameo role here, it’s a doozy. As Mrs. Hepworth, the grande dame of local society, Bruns bursts onto the stage in a hurricane of brocade, as flamboyant as only the richest woman in town can be. She is wickedly funny.

Dubov also worked with Jack Sbarbori to create an elaborate set, beautifully lit by Don Slater with authentic-looking gas lamps. The large central area is the shoe store, elegantly furnished with flocked wallpaper, flounces above the windows and a velvet throne for the customer. An alcove off to one side represents the Hobson’s comfortable middle-class home. The other alcove, with its unplastered walls, is the cellar in which the rebels set up their own rival shop.

The costumes are hilarious. Designed by Stephanie Mumford and Clare Parker, most of the outfits are outrageous, generating bursts of laughter at the very flounce of a bustle. The sisters go from staid black outfits when they are in mourning to hoops and feathers when they are not, while the gentlemen sport formal morning coats (which we call tails) over truly violent plaids.

Hobson’s Choice was written by Harold Brighouse in 1914. He was a member of what was called the Manchester School of dramatists, which—like the Kitchen Sink School of post-War England—aimed to break down society’s stifling rules regarding gender and class. It is the best-known of his half-dozen plays.

The tempo is brisk, except for a few spots where the play itself gets too preachy. The first part of Act IV is particularly slow. That’s when the doctor—dressed like the Prohibition-seeking Carrie Nation and sounding like Shaw’s Major Barbara—lectures about the evils of alcohol.

The doctor is preaching temperance, much in vogue at the time. But unlike the idea of women’s suffrage, the theme doesn’t resonate today. The result is a scene that is overly-long and (pun intended) much too sober for this otherwise intoxicating show. Some drastic cutting would help.

That caveat aside, Hobson’s Choice is a splendid antidote to the sorrows of our current world and a lighthearted saga in which hard work and justice prevail. I recommend it highly.

Running Time: Two hours and 30 minutes, including one 15 minute intermission. 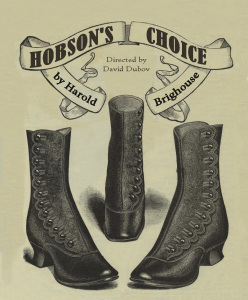 Fun Fact: The title, Hobson’s Choice, is based on an expression that means ‘no choice at all,’ or take it or leave it. The phrase was coined in the 16th century, and named for one Thomas Hobson, a stingy horse dealer in Cambridge, who told his customers they could rent any horse they wanted, provided that it was the one he chose, standing—and probably lame—next to the stable door.