With its snappy-saucy take on Chicago, The Keegan Theatre shows it knows how to give an audience the ol’ razzle-dazzle. And Keegan has done the durable musical proud. In fact in Keegan’s mounting of the quasi-naughty musical on a bare wood set in a decommissioned church, a case can be made that Chicago’s vaudeville-based storytelling works even better than it would in a glitzy Broadway house.

Is it getting hot in here or what?

Well, hell yeah. But under the sure hand of Co-directors Susan Marie Rhea and Mark A. Rhea, the show’s actual heat-generators are soon revealed: women who kill…and women actors who kill (pun intended).

Foremost is Maria Rizzo as Roxie Hart, the brassy dame who becomes famous for shooting her lover and gets a vaudeville act out of the deal. In Rizzo’s riveting performance, Roxie is a bundle of vulnerability, with a fascinating tentativeness that reads as both insecurity and moxie. Rizzo can belt out a solo (her “Funny Honey,” is sensational), and she can high-kick like a chorine on caffeine. But it is in the quiet authenticity with which she conveys Roxie’s conflicted inner life that Rizzo’s performance becomes a star turn.

Right behind is Jessica Bennett as Velma, Roxie’s jailhouse rival for tabloid fame and ultimately her vaudeville partner. Bennett’s vocals are strong, her presence is appealing, and her robust dance moves tear up the stage. As the story goes, Roxie and Velma are an odd match—they parlay their notoriety as murderers into show business because, well, career options for ex-cons are limited. So there’s a not-quite-a-twosome tension in Rizzo’s and Bennett’s teamwork—as if to say: our individuated characters have not got lost in all that jazz.

If I were pressed to pick my favorite number in Chicago, it would be “Cell Block Tango,” and in Keegan’s production it gets a killer deployment from the chorus of murderesses: Katie McManus (Liz), Heather Gifford (Annie), Jennifer Hopkins (June), Jillian Wessel (Hunyak), Amber Jones (Mona), and Melrose Pyne (Go-To-Hell Kitty)—all under the baleful eye of Rikki Howie Lacewell as Matron Mama Morton, whose smokey vocals on “When You’re Good to Mama” are delightfully wry.

The men of Chicago are not to be outdone. Michael Innocenti as Roxie’s hapless hubby, Amos Hart, does a showstopping job on “Mr. Cellophane.” Wearing cartoony white gloves and a touching soulfulness, he milks comic pauses for all they’re worth.  Kurt Boehm as the debonaire and skeevy lawyer Billy Flynn slam-dunks his ventriloquist number, “We Both Reached for the Gun” (with Rizzo doing a drop-dead-hilarious dummy on his lap). The dance ensemble of men—Andre Hinds, Rj Pavel, Will Hayes, Kaylen Morgan—has two tall standouts, Hinds and Morgan, who partner Rizzo on “Roxie” with grace and flash. And Chris Rudy as the cross-dressing newshound Mary Sunshine delivers “A Little Bit of Good” with amusingly shrill operatic panache.

There’s plenty of razzle-dazzle and scads of sass and pizzazz on display in Keegan’s Chicago. Back in the 1970s, its legendary creators Fred Ebb, Bob Fosse, John Kander ingeniously packed the show’s plot and musical numbers into successive vaudeville acts; and on the Keegan stage, each such scene plays like a house afire. But in the end what sets Chicago apart as an American musical classic is its throughline of two down-and-out women with man troubles who become catty competitors then pick themselves up by their garter straps and decide they’re both better off in a bond. Not a thoroughly modern narrative of sisterly empowerment, perhaps, but thanks to a sterling production with two powerhouse female leads, it still works like a charm. 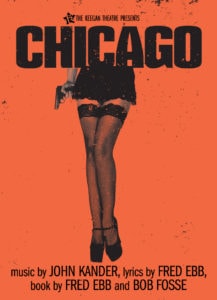