A mash-up of classical music with classic rock, Rocktopia, co-created by vocalist Rob Evan (of New York stage and Trans-Siberian Orchestra fame) and Maestro Randall Craig Fleischer (a noted Conductor, Music Director, Composer, and Arranger), is yet another indication of the growing invasion of Broadway by rock musicals (among them, Jimmy Buffett’s Escape to Margaritaville and SUMMER: The Donna Summer Musical) and by rock musicians in search of a medium-sized performance venue, halfway between a large-scale arena and an intimate cabaret (as with Springsteen on Broadway). But Rocktopia, playing a limited six-week run at The Broadway Theatre, is something else again.

In the format of a fusion concert, not a traditional Broadway musical, jukebox musical, or autobiographical solo show, there is no narrative component, no running commentary by the artists, no set list of musical numbers included in the program, and no explanation or contextualization of how the works were chosen or why they were paired. For a show seemingly aimed at a cross-over audience, those are some major missed opportunities for expanding awareness and appreciation across the genres.

The self-described “multimedia extravaganza” intersperses cover versions of some of the most popular chart-topping hits of the late 20th century (including songs by The Beatles, The Who, Elton John, Jimi Hendrix, Led Zeppelin, Queen, Styx, and more) with a selection of extremely truncated excerpts from historically renowned orchestral and operatic compositions (by such masters as Mozart, Handel, Beethoven, Tchaikovsky, Strauss, Puccini, Berlioz, and Stravinsky). They are presented under an array of white, colored, and rotating spotlights (frequently aimed at the audience with blinding intensity) and before a backdrop of busy video projections (video design by Michael Stiller and Austin Switser) that are often distracting and sometimes only tangentially related to the themes of the music. There is no theatrical set design per se, just the large stage and stationary bi-level metal platforms on which the musicians and singers perform.

With that said, what Rocktopia does offer, outside of true Broadway-caliber production values, is an array of talent from the different spheres of music that it fuses: the 20 skilled musicians of The New York Contemporary Symphony Orchestra; the mellifluous 30-member chorus of the New York Contemporary Choir; an accomplished five-piece pop-rock band (violinist Máiréad Nesbitt, a founding member of Celtic Woman; guitarist Tony Bruno, who also serves as the show’s Music Director; drummer Alex Alexander; bassist Mat Fieldes; and long-time Broadway pianist Henry Aronson); and five noted lead vocalists (Evan and his Trans-Siberian bandmate Chloe Lowery; Tony Vincent and Kimberly Nichole, both of whom first gained widespread attention as contestants, in different seasons, of TV’s The Voice; and operatic soprano Alyson Cambridge), along with special guest Pat Monahan, frontman of the rock group Train, who appears through April 8 (to be followed by Twisted Sister’s Dee Snider from April 9-15, and Robin Zander, lead singer of Cheap Trick, joining the show for its final week in New York on April 23-29).

All of the musicians are impressive, but Bruno’s guitar solos are especially electrifying, and Nesbitt’s featured performances on Celtic violin are the most consistently thrilling highlights of the show. The chorus provides tuneful harmonies, and the lead vocalists – in garb that synthesizes the formality of traditional classical attire with the glam, allure, and insurgence of rockers (costumes by Cynthia Nordstrom) – are given ample opportunity to display their individual stylings (the neo-punk attitude of Vincent, who originated the role of St. Jimmy in American Idiot, is a standout). They also get to showcase their big voices, with the entire company competing to hit the glory notes, most notably in the Act I closer “Nessun Dorma,” the beloved tenor aria from Puccini’s opera Turandot, in which all six lead singers show off their powerhouse pipes (if not always the consummate richness, resonance, and control of a Pavarotti).

Not all of the musical pairings are as successful as others; though the lyrics of both extol female beauty, Puccini’s aria “Quando m’en vo” from La Bohème, sung at a high-decibel level by Cambridge, proves too overwhelming to alternate effectively with Evan’s soft and sensitive version of The Beatles’ “Something.” Among the best matches are Gershwin’s “Rhapsody in Blue” with Queen’s “Bohemian Rhapsody” (two outstanding 20th-century examples of the fusion of classical music with a popular contemporary style) and Beethoven’s ebullient “Ode to Joy” with the company’s equally uplifting rendition of Journey’s “Don’t Stop Believin’,” both of which bring down the house.

The most satisfying covers include “Another Brick in the Wall” (with excellent support from the chorus), which fully captures the authentic tone of Pink Floyd’s iconic hit. Others suffer in comparison with the originals. Monahan and Nichole’s duet on “Dream On” is a vocal mismatch, which finished out of synch at the performance I attended, and never approached the passion of Steven Tyler and Aerosmith. But Monahan’s encore of Train’s Grammy-winning “Drops of Jupiter” (with a thematic lead-in from Holst’s “The Planets”) left me wishing that more of his own hit vocals had been integrated into the show.

There is, without question, a market for this kind of entertainment, though in essence, the show is a music spectacle more suited to a casino, amusement park, or cruise ship than a Broadway theater (which was left completely strewn with litter – water bottles, food wrappers, dirty napkins, and discarded programs – covering the historic venue’s velvet seats and carpeted floor). Unfortunately, though Rocktopia has some rousing peaks and powerful performances that will have you rocking and cheering, it isn’t quite the “classical revolution” it claims to be; a lot of its appeal is based in nostalgia for old favorites. 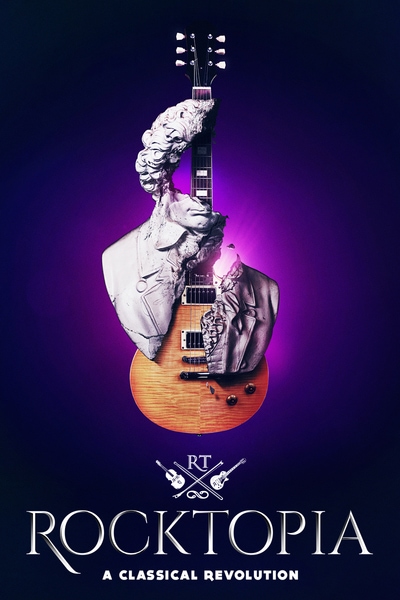