If you’ve ever witnessed (or worse yet, experienced, encouraged, or participated in) the “girl-on-girl crime” of high-school cliques, malicious gossip, fierce competitiveness, and vicious backstabbing, and can still see the humor in it (or at least in the most egregious perpetrators getting their comeuppance!), then Mean Girls – the new musical comedy by Tina Fey (book), Nell Benjamin (lyrics), and Jeff Richmond (music), making its Broadway debut at the August Wilson Theatre – will have you laughing out loud at the ferocious behavior, wild machinations, and ruthless quest for popularity that define the social politics of female adolescence. Adapted from Fey’s hilarious teen-revenge cult film of 2004, and directed with a combination of youthful exuberance, biting wit, and light-hearted didacticism by Casey Nicholaw, the show is essentially faithful to the original, but with updates that bespeak a current generation obsessed with social media, selfies, and cyberbullying added into the mix.

When the new girl Cady Heron (who grew up in Kenya and was home-schooled by her biologist parents) returns to the US and begins her junior year at a public school in Chicago (“to get socialized”), she is thrust into a strange teen culture that makes the animal kingdom look tame by comparison. After being ignored and rejected by her classmates, she is befriended by Goth girl Janis Sarkisian (a mash-up of Cher’s original last name and singer/songwriter Janis Ian, best known for her poignant 1975 hit “At Seventeen,” which chronicles the pain of being an outcast in high school) and her gay bestie Damian Hubbard – two arts students who serve as narrators and present their go-back story to the new class of incoming freshmen. Opening with the song “A Cautionary Tale,” which sets the comical cutting tone for the show and observes that “mean is easier than nice,” they soon give Cady the scoop on the other students and cliques (from the jocks to the stoners to the mathletes), warn her about the exclusive trio of popular girls known as the Plastics (because they’re “shiny, fake, and hard”), and enlist her in a scheme to infiltrate the group (who’ve offered her a rare invitation to have lunch at their table), in the hopes of taking them down.

At first sweet, smart, and naïve, Cady develops an instant crush on Aaron Samuels, a boy in her calculus class and the discarded ex of Regina George, the leader of the Plastics. Controlling and manipulative, Regina convinces Aaron to come back to her, mostly to spite Cady and to show her who’s in charge, inciting Cady to forge ahead with the plan to sabotage her clique from the inside. In so doing, she becomes just another mean girl, seduced by the power of being popular, until Regina launches a counter-attack that puts Cady in the hot seat, creates chaos among the students, and forces their principal and calculus teacher to give all the junior girls an important lesson about treating others with kindness.

From the leads to the ensemble, the cast is terrific, bringing all the familiar high-school types to life with sidesplitting characterizations, priceless one-liners, impeccable comic timing, spot-on moves, and powerful vocals. Erika Henningsen stars as Cady and convincingly captures the arc of her development, from her initial attempts at trying to make friends, wanting to fit in, and playing dumb so Aaron will tutor her in math, to her devolution into “a clone of Regina,” to finding herself again, acknowledging her misdeeds, and making amends. Taylor Louderman as the aptly named Regina – queen of the Plastics, the pinnacle of the high-school social hierarchy, and “a massive deal” – is believably rich, spoiled, superficial, and conceited, and prone to exclaiming “Shut up!” (to which Cady, unfamiliar with teen jargon, responds, “I didn’t say anything”). Rolling her eyes, tossing her hair, sticking up her nose, and commanding her devoted drones and targeted prey in high fashion and stiletto heels (with just the right costumes by Gregg Barnes, hair by Josh Marquette, and make-up by Milagros Medina-Cerdeira), Louderman’s voice is as big as Regina’s personality (and suitably devilish, as she devises to exact her revenge and “Watch the World Burn”).

She is attended in her clique by the insecure Gretchen, who craves acceptance and tries too hard to be “so fetch,” but is constantly belittled by her leader, until she is tempted to spill the Plastics’ unsavory secrets, to make Regina follow her own rules, and to switch her loyalties to Cady. Ashley Parker is absolutely adorable in the role, and thoroughly endearing as she suffers the juvenile heartbreak of Regina’s fickle favors, feels as easily shattered as “an I-phone without a case,” and self-consciously questions in song, “What’s Wrong with Me?” Rounding out the popular triumvirate is Kate Rockwell, a howl as the wide-eyed Karen, who enjoys sex with a roster of boys, can’t seem to finish a thought, and, in the defining introductory song “Meet the Plastics,” candidly describes herself as “so dumb. That’s all.”

Barrett Wilbert Weed delivers the strength, incisiveness, and individuality of Janis, and Grey Henson brings down the house as Damian, with his unabashed flamboyance and razor-sharp reading of the other characters. Also outstanding is Kerry Butler, unrecognizable as she switches from Cady’s mother, to her teacher Ms. Norbury (the role was originated in the movie by Tina Fey, to whom Butler’s characterization pays tribute), and Regina’s “cool Mom” Mrs. George, who talks, acts, and dresses like a Valley Girl and caters to her daughter’s every whim; and Rick Younger as the principal Mr. Duvall, who is clearly, and laughably, beyond his expertise and out of his comfort zone with the high-school girls.

While the musical’s numerous songs support the characterizations and advance the plot, some are redundant, others are cute but unmemorable, and few have tunes that will keep you humming after you’ve left the theater. But all of the numbers are aided by Nicholaw’s lively and imaginative choreography, including students in the cafeteria dancing in unison with red lunch trays while posing the musical question “Where Do You Belong?” Other song-and-dance standouts are “Stop,” with Damian advising Cady to change her behavior and leading the ensemble in an ebullient syncopated tap routine; and “Do This Thing,” in which “math nerd” Kevin Gnapoor (the excellent Cheech Manohar) raps his hope that Cady will participate in an upcoming math-whiz competition.

Stunning video projections on the set’s curved backdrop of screens (video design by Finn Ross and Adam Young) are another stellar component of the show, transporting us from Africa to Illinois, from the school’s classrooms, hallway, lunchroom, and gymnasium, to the local shopping mall and Regina’s bedroom, while also placing us firmly in our current digital age and magnifying the girls’ malicious posts on social media and “life-ruiner” insults in their disparaging “burn book.” Those are enhanced by Scott Pask’s fluid set design, with apropos furnishings that easily shift, in perfect synchronization, with the changing projections.

Mean Girls is an uproarious way to teach young girls and teens, and to remind adults, of the importance of being kind and getting along with others despite our differences. Now wouldn’t that be “so fetch?” 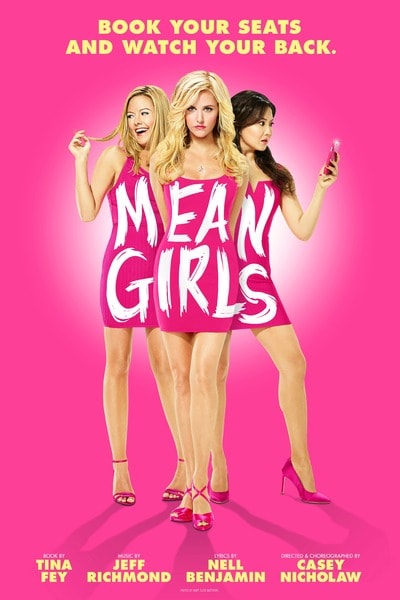