50 years ago, Martin Luther King, Jr. was shot on the balcony outside of his room at the Lorraine Hotel in Memphis. His death at age 39 still reverberates throughout the country, which still battles for racial, social, and economic justice. In her play The Mountaintop, playwright Katori Hall offers a fascinating retelling of how King spent the last night of his life. The play will be performed by L.A. Theatre Works at George Mason University’s Center for the Arts on April 14. I had the opportunity to interview the two actors who star in this Olivier Award-winning play: Gilbert Glenn Brown (CBS’s The Inspectors, upcoming feature film The Best of Enemies), who plays Dr. King, and Karen Malina White (The Cosby Show, A Different World, Malcolm and Eddie), who plays Camae, a maid who is delivering his room service at the Lorraine Motel. The two have been touring the country with The Mountaintop since January and were kind enough to speak to me about the show.

Chuck Leonard: When you consider King’s Mountaintop speech, do you think this play is “taking up the mantle?”

Karen Malina White: Yes, I think Katori has written a play that has blended fact and fiction so well. At the heart of the piece, she gets to the humanity of Dr. King. It is up to us to pick up the baton, as it says in one of the speeches that Gilbert has. We have had school kids who have seen the show across the country ask us, “What can I do to pick up the baton?”

Gilbert Glenn Brown: It is interesting about Dr. King, that he never saw himself as perfect. For me what was perfect was his capacity for love and compassion. He had the ability to communicate to people and inspire them to stand up and take charge of where they are. Because he had doubts too, fears, you know. He was a man, and we forget that sometimes. He has been canonized by society, and rightly so — but we have put him on that pedestal and it almost lets us off the hook to a certain degree. In this play that Katori has created, you can see him as this man, who is tired, who was challenged, and in spite of all that, he was still able to have this impact on the world. By humanizing him in that way, it allows us to ask “What can we do, how can we positively change the world?”

Camae is a character who is not from history and brings in new elements to the story. How did you prepare for acting the character?

Karen: She represents the youth and asks the questions they were asking King at the time about his non-violent approach. She is a voice of those youth who may have been leaning a little more towards Malcolm X and the Black Panther movement. She also stands for the women of the time and challenges him about his little bits of sexism and traditional roles of women in the movement. She also is poorer than King, who is middle class. Katori has written it in there.

L.A. Theatre Works does its shows in a radio play style, which is not the standard presentation style for actors. Could you speak to how the style affects your approach to the character (and the expectation of some audience members)? 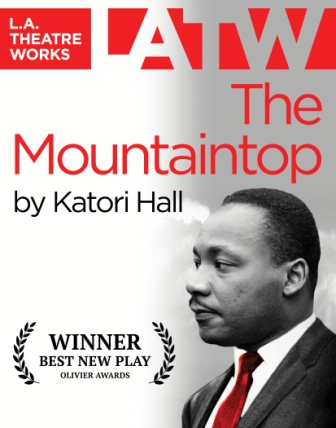 Karen: It doesn’t change my approach, because I still have to do the work, to get to what is going on with Camae, with what drives her. The work is the same, but when we started, we wanted to use all the traditional style. But what we found is that not looking at each other forced us to connect only through the heart. It supports the otherworldly parts of the play, the past, present, and future happening simultaneously. It makes it more profound because we do have to reach each other from soul to soul.

Gilbert: We don’t look at each other as often or touch each other the way that commonly we would. But I would say it forces us to go deeper, to connect on a heart connection, to deepen the spirit of the piece. At the same time, it brings the audience in because they become Dr. King. They become Camae. So they are not off the hook.

I see. It engages the audience. What does Katori Hall’s script tell the audience about King that is new?

Gilbert: Most people didn’t know that he smoked, that he did have a drink every once in a while. He was under a lot of stress, a lot of pressure. Not only in fear for his own life, but his family’s and those others around him. That’s something that Katori captures in the piece. That he was really tired. He was like Atlas, with the weight of the world on his shoulders. We think he should be perfect, but no. He was a man, a flawed human being. He wasn’t perfect.

Karen: I didn’t know that his given name was Michael, but when he was five, his father changed his own name and his son’s to Martin Luther. I didn’t know that he had a pillow fight earlier that night, starting with Andrew Young and then others piled in.

That really brings out the human qualities.

Gilbert: The message is of seeing humanity and in seeing it, there is power. You can take a stand, with the tools you have, with your skills, with your voice. You can start in your home, in your town, and it can branch out from there. You have to start. Martin Luther King is not going to come back again. It is up to us all.

All the audience gets Katori’s message: It is not up to one person to carry the baton, it is all our responsibility. People are standing up and speaking truth to power, and saying “No, this can’t go on.” The way Katori has written the play, Camae gets to represent the questions of youth at the time and today. I get inspired by the young people in our country and who see our play and speak to us. The youth have a fantastic barometer for BS.

I am fascinated by the questions Katori Hall asks of the audience. What will the audience be questioning when they leave this show?

Karen: I would hope that they ask themselves, how can I pick up the baton? How can I be a better citizen right where I am? I hope they think about their legacy, about their footprint. I think she wants the audience to see the humanity, connect with that humanity and say, he’s no different than I. So, therefore, what can I do? And to not give up, to not lose hope. We are in a time of divisiveness, but we can re-engage to get together and move our country forward.

The Mountaintop will be presented on April 14, 2018, at 8:00 pm by LA Theatre Works at George Mason University Center for the Arts, 4400 University Drive, in Fairfax, VA. Purchase tickets at the box office, or go online.