The latest incarnation of Alan Govenar and Akin Babatundé’s evolving musical tribute to Blind Lemon Jefferson, following their award-winning productions of Blind Lemon: Prince of Country Blues (2001) and Blind Lemon Blues (2004), is Lonesome Blues, now in its world premiere with The York Theatre Company. Directed by Katherine Owens, the current one-man show, starring Babatundé and accompanied by David Weiss on guitar, incorporates the writers’ ongoing research into the scarce documentation on the 1920s blues legend, interwoven with 32 songs that conjure his life’s journey and explore his psyche.

As much a mood piece as a traditional biographical jukebox musical, the mostly sung-through solo presentation consists of fragmentary reminiscences of the events, people, music, thoughts, and emotions that defined the influential bluesman and inspired his songs (numbering more than 80 recordings released between his discovery in 1925, and his premature death, at the age of 36, in 1929). Babatundé, in period-style clothing and dark wire-rimmed glasses indicative of the singer’s eponymous blindness (costume design by Gelacio Eric Gibson), fully embodies the man with his natural movements, Deep-South dialect, and powerhouse vocals, delivering the disjointed non-linear recollections that flood his mind and the music that comes from the depths of his soul. From the street corner in Dallas to the recording studio in Chicago to the overflowing concerts attended by his throngs of fans, he recounts Jefferson’s tribulations and triumphs, “crying out how he feels” in the stirring manner inherent to his genre.

Owens’ animated blocking has Babatundé moving around the stage before James Morgan’s evocative scenic backdrop of an urban brick wall with an open archway, sitting on a trunk or a chair, directly addressing the audience, standing and walking to sing and to sway, encouraging us to respond to the music and to clap along to the beat. He demonstrates his astonishing range, from the jaunty rhythm of “Deep Ellum Blues” (based on the downtown Dallas neighborhood that was Jefferson’s home) and the saucy humor of “Happy New Year Blues” to the grit of “Black Snake Moan,” from his soft falsetto in “Motherless Child” to his low-down notes in “Mosquito.” Along with his portrayal of the show’s central character, Babatundé also assumes the demeanors, voices, and stylings of an array of Jefferson’s contemporaries, both men and women, referenced in his imagined memories, including songs and anecdotes from his association with the iconic Lead Belly, when they were “laughing, loving, and playing” together, and in-character renditions of hits by female blues vocalists Bobbie Cadillac (“Carbolic Acid”), Lillian Miller (“Indiana Harbor”), and Hattie Hudson (“Doggone My Good Luck Soul”).

With nearly a dozen different figures and more than 30 songs of varying lengths packed into 80 minutes, the show is sometimes confusing and lacking in fluidity, suffering from truncated musical numbers, abrupt shifts in character, and staccato breaks between the random thoughts being recounted. And the context in which the story is set doesn’t become clear until the closing song, “See That My Grave Is Kept Clean.” But like the style of the music itself, Lonesome Blues is more about feeling than narrative, and Akin Babatundé skillfully delivers the range of emotions in The York’s “free-form” production. 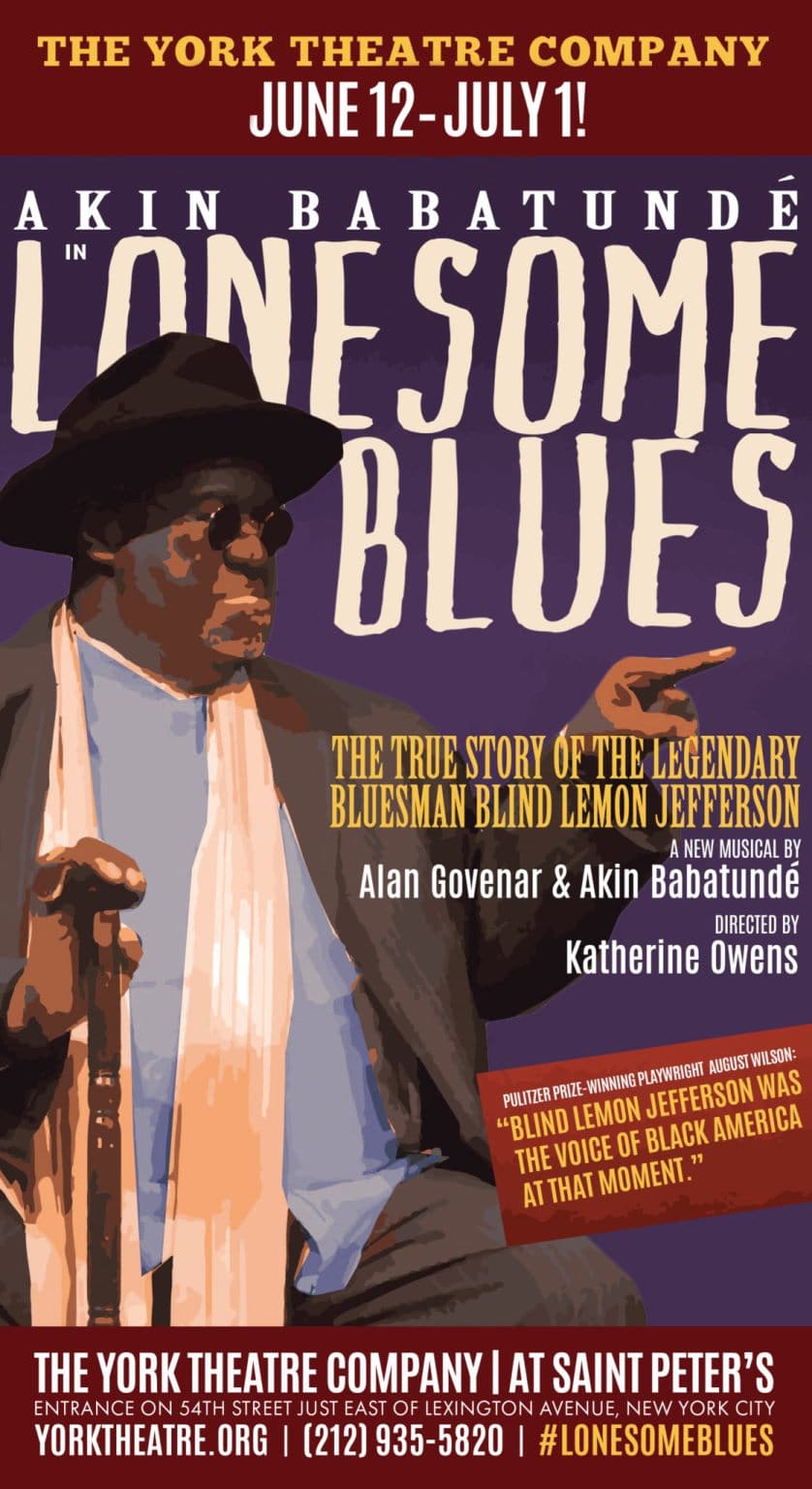