I went to see Other Life Forms, the new comedy at Keegan Theatre, not expecting to write about it. But the play changed my mind. I wasn’t even home yet when on an impulse I tweeted that Other Life Forms is “a beautifully original comedy about love and friendship that is so funny, moving, and deeply truthful I expect it is destined for Off-Bway and beyond.” Then days later, still high on it, I sat down to talk with real-life friends and lovers Brandon McCoy, who wrote the play, and Brianna Letourneau, who acts in it as Leslie.

John: Other Life Forms had me laughing a lot, and then it left me so emotionally moved I was just floored. It’s like a wellspring of insights about love and friendship that just kept trickling through the play—especially in that amazing last scene in the coffee shop between Ben [Josh Sticklin] and Leslie.

I was struck by all the relationship wisdom that was coming from Leslie. Everything she’s trying to communicate to Ben seems faithful to a woman’s point of view, unfiltered by a man’s, and I found myself wondering about the playwright: Who’s his muse? Male playwrights don’t come to this—

Brianna: —on their own necessarily.

And when I found out you two are a couple, which I didn’t know going in, I thought to myself: There’s a story here that I want to find out about.

You’ve been living with this play for—

Brianna: Quite a while.

Brandon: Three and a half years.

And you just had a wedding anniversary?

Brianna: Yeah, we’ve been married for four years and together for thirteen.

The play seemed to me so truthful, it had to have been rooted in real life somehow—stuff you could only know by living it.

Brandon: There’s a story there for sure.

You’ve worked a lot together in theater. Was yours a “showmance”?

Brianna: It wasn’t a showmance.

Brandon: It was around theater but it wasn’t a showmance.

Brianna: It was a classroom-mance.

Brianna: So he was my TA. That’s where the relationship started. That’s where the chemistry began. It was my very first theater class ever and Brandon’s very first class teaching as a grad. I walked in and I didn’t know anyone. I’m from Oregon originally. I’d just driven three thousand miles away from my family. I was a wreck. Brandon was in the front of the classroom calling roll and I was like, he’s going to fuck up my name, ’cause it’s a hard one, Brianna Letourneau. No one ever gets it right the first time. And Brandon said “Brianna Letourneau” like he knew exactly how to say my name. It made me sit up for a second. I sort of took him in for the first time. And then that day he performed two Shakespeare monologs back to back, just off the cuff, brilliantly. I’m a young eighteen-year-old at the time and I had never seen that before.

Brandon: It’s also fair to say that I was really young too.

Brianna: You were very young, you were twenty-two.

Brandon: Well, I took you in for the first time in that class too. But for the record, nothing happened.

Brandon: Nothing happened until you were not my student anymore.

You’ve worked on a lot of plays about love, but you wanted to write a different kind of love story. Say more about that.

Brandon: My favorite experiences in the theater are watching comedies. When we see plays together, we will talk on the drive back and after we get home about what we saw, and some of the most profound conversations we have had have been in and around comedies. If you’re laughing at something, if you’re engaged in it in that way, you’re immediately reflecting on it. Then if you allow yourself to have that conversation afterward, you start to wonder why you’re laughing in the first place.

What’s very you in this play?

Brandon: Of all the plays that I have working drafts for, this is the one where I think I’m in the least.

Brianna: Yeah, there are elements of each one of these characters that we probably represent on some level. But I wouldn’t say this is Brianna and Brandon’s story by any means.

Brandon: It comes back to what you and I value in relationships.

Brandon: This idea of love—that chemistry plus friendship equals love—if that’s the thesis of this play, which I think it is, this is certainly something that you and I agree on.

Brianna: Well, we actively work on.

Brianna: I think this is an exploration in our lives of what we have defined love as.

Brandon: And what we value in each other.

Brianna: What we value. That’s a really good way of saying it.

During the three years the script has been in the works, did you have something like pillow talk about it?

Brandon: Brianna is, without a doubt, my first editor, my first set of eyes.

What was Brianna’s influence on the play?

Brandon: I have an interesting tidbit about that.

I should take you into separate rooms and see if your answers match up.

Brianna: Would we end up together?

Brandon: I will say that this was not Brianna’s favorite play of mine that I have written.

Brandon: And what I said to her was something along the lines of: You don’t get it.

Brianna: I totally got it. It was the comedy part. For me, the last scene was the reason why I wanted to play Leslie.  She has such a clear arc and she’s so honest. I do really connect to her in so many ways.

Brandon: There are other plays that I have worked on that Brianna’s voice is in intentionally. The thing about this play that I didn’t realize until we were in tech is that Brianna’s voice was in Leslie, and it’s because she and I are sitting around our house reading these scenes out loud and I’m stealing. I’m stealing from what she is. Her rhythm, her cadence.

Brianna: There’s a lot of truth in Leslie.  She’s wise but she’s also very funny and very honest. She’s the one who is holding people accountable and herself accountable, which I really respect. I respect Leslie and I think I strive for that.

She’s a geologist and she’s the rock.

Brandon: Leslie is the most down to earth. Literally, she is a geologist. I think sometimes when you’re with somebody this long and you speak the same language with each other like we do, you can lose sight of how much you’re actually influenced by each other.

So many moments in the play rang true for me. Like points of emotional clarity expressed so simply and directly they just open the heart. One of them was that story about the point when Ben knows he’s in love with Leslie. She’s got food poisoning from a restaurant they ate at and she’s puking her guts out and he spends the night with her in the toilet taking care of her and he’s holding her and…she takes his hand. That simple gesture flooding with emotional truth, that destroyed me.

There’s another brilliant passage in a speech by Jeff [John Loughney]. It’s about our fear of screwing up and having someone call us out on it.

Having to face your mistakes, missteps, and miscalculations. And then having someone look at you and say to you, “You were wrong.”

The whole beginning of the play is about that fear—the fear of screwing up and being exposed for it—in the form of a hilarious comedy about online dating anxiety.

But how that fear gets handled in the second act just knocked me out. How did you know that theme belonged to the play?

Brandon: Because that is me. If I’m in this play, that’s me. I suffer from social anxiety quite a bit. In fact, I’ve written another play that’s almost entirely about that idea.

Brandon: A long time ago, when I was just discovering that I had social anxiety, a therapist told me that usually it’s a fear of being misunderstood. It’s a fear that what you’re putting out there is going to be interpreted in such a way that you’re out of control of it, and it takes a life of its own once it’s out there.  I think some sort of fear drives all plays about the human experience. That was mine. Mine is that you put something out there into the world and you sort of wait and see how it gets returned to you. Then the thing about relationships, that ultimately works, is that you find somebody who knows you’re making missteps and miscalculations and loves you anyway.

Brianna: Can I add to that? I’ve gotten asked a lot about that last scene: Do you think that Ben and Leslie end up together? And I’m not going to answer that, because I think people should have their own experience with that. But honestly, for me it changes daily, depending on how that scene goes, where I think we land. I do feel like a takeaway for me in connection to Brandon and my relationship is that there’s an opening of Ben at the end of the play through Leslie. She is not afraid to acknowledge where her own faults are and doesn’t share that same fear that is evident in this play.

Brianna: She says: I have to talk about how I messed up and if you discover you did too, so be it, let’s work through it together. In Brandon and my relationship, I think we’ve mirrored that opening for each other, which is a good thing, to be celebrated.

Your program note says that you hope audiences laugh and have a really good time. How have they been responding, and what are some of people’s reactions to the play that have particularly gratified or surprised you?

Brandon: When you rehearse a comedy, just before the audience comes—

Brianna: Oh my God, it was amazing.

Brandon: It was one of the most cathartic experiences of my life because the first scene started and I was just like, okay, thank God. This is actually funny. And then they stayed with it. And it was like, oh okay, we’re on to something.

Brianna: They were listening and they were leaning in. Brandon hasn’t been at every show and universally it has been very positive. This play makes you think about your life, right now: Who am I in this? What is love to me? And something that a lot of people have come up and said to me after the show—which feels very vulnerable and honest—is the line that resonates with them the most: “We forgot how to be friends.”

The play does a depth charge at that point.

Brianna: You have to trust that.

Brandon: This is why the theater is important. It’s okay to make people laugh. If they get something else out of it, that’s wonderful. But it is okay for them just to laugh. When Jeff says, “You’re going to be okay,” everybody hopefully takes a breath. Then they leave the theater thinking they’re better for the experience of seeing this, because they’re happier than when they came in. 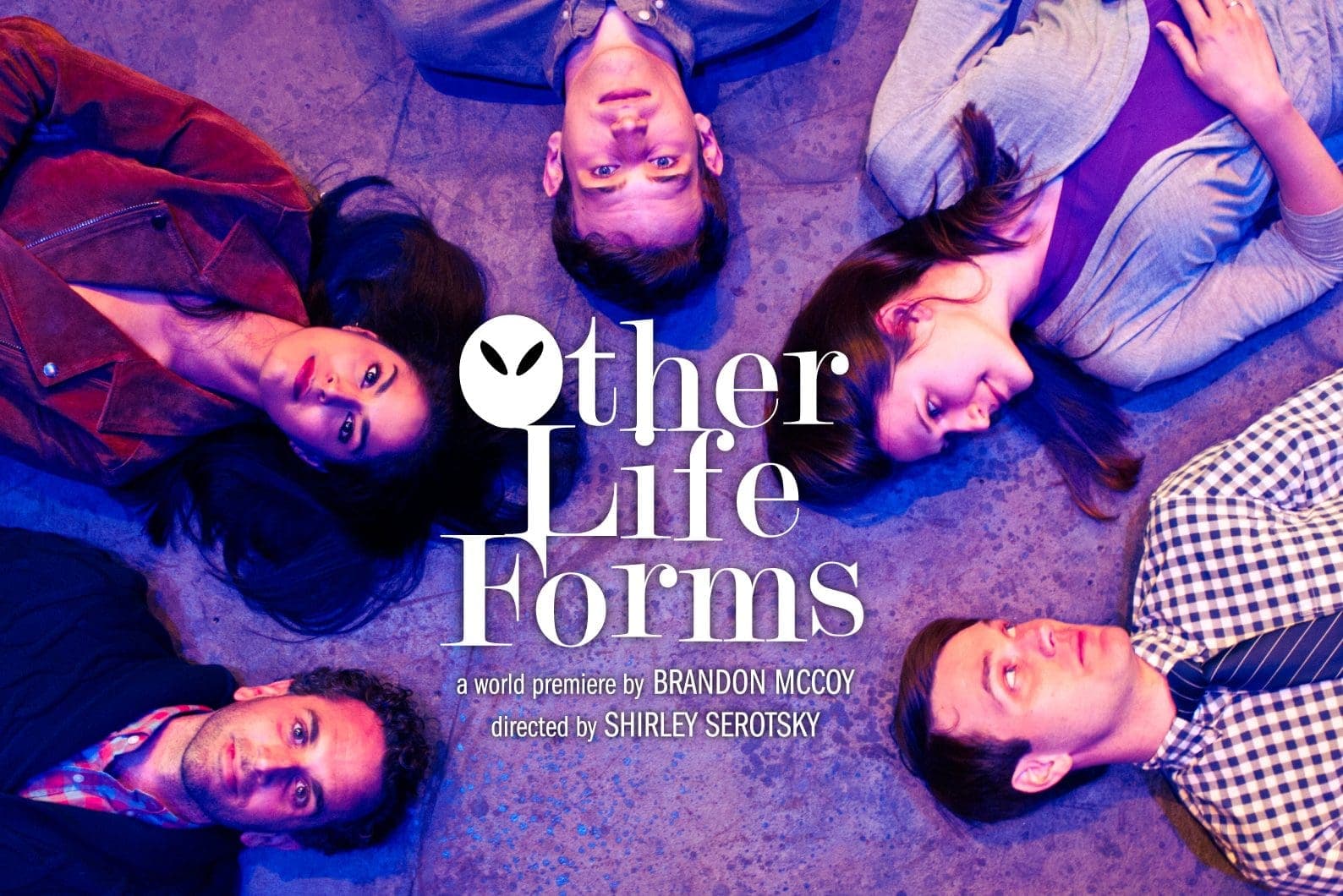 Running Time: One hour and 50 minutes, including one intermission.