What takes more courage than getting up on a stage by yourself and doing a one-man show? How about getting up on stage and doing an unscripted one-man show about the details of your dating life? F*ck Tinder: A Love Story, is David Rodwin’s newest bold creation, and it earned him a nomination for Best Solo Performance in the 2017 Hollywood Fringe Festival.

In F*ck Tinder, Rodwin, who is the writer and sole performer, shares the story of his personal quest for love. After being broken up with and held up at gunpoint on the same night, Rodwin moves to San Francisco and downloads Tinder. He proceeds to go on dates with 120 women in a mere 2 years. In the small, cozy, and intimate room in Christ United Methodist Church, with a black curtain and wooden piano as his backdrop, Rodwin shared his story using humor, vulnerability, excitement, and the passion of a great storyteller. 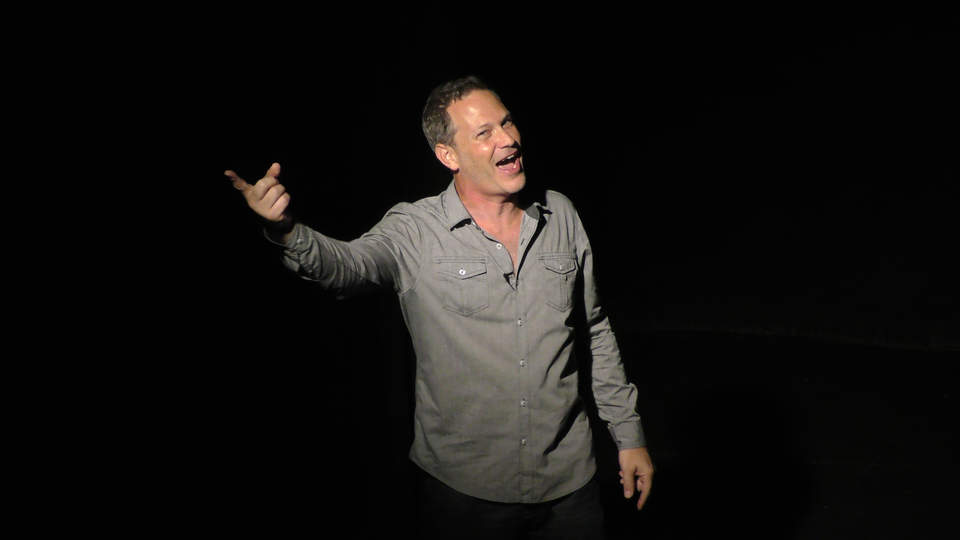 From the moment Rodwin stepped into his light, he established a connection and trust with the audience by having everyone in the room yell “Fuck Tinder!” as loud as they could. Before the show began, he also promised that although his show was a comedy, there would be moments of seriousness and exposed truth.

He did not disappoint. In fact, one of the most impressive aspects of this show was how Rodwin was able to intertwine honest and relatable truths about love and the human experience with his funny and often bizarre personal dating tales. His hilarious anecdote about being asked to call an uber after having sex held a truth about loneliness. And his raw, dirty, and unapologetic description of a sex party he attended carried a message about the things people are willing to do for those they love.

This skillfully crafted blend of hilarious stories and universal honesties about love, as well as his descriptive imagery that made even the city of San Francisco feel like a character in the show, is a real testament to Rodwin’s writing skills.

There were minimal technical elements in this show. Music and light were used at different points to support the tone of the story Rodwin was telling. There were times when Rodwin would be at a party, so the music would be fast and the lights dancing. At other moments Rodwin would open up about a personal struggle or heartbreak, the music would slow, and the lights would fade to a soft blue in order to support his emotional exposure. However, the core of the show was simply Rodwin on stage alone with his story.

These days, it’s amazing how rarely people truly listen to one another. In the age of technology, we are glued to our screens and constantly looking for virtual likes (or swipes, as Rodwin touches upon in his show). Sadly, it is more and more uncommon to see people spending time with each other. The fact that Rodwin stands on stage alone, really talks to his audience, creates a relationship with them, and shares his own life experience in all its messiness and glory, is not only impressive but it’s refreshing.

When the play ended, Rodwin came back on stage to share a little bit about his current love life and some recent news about the friends he talked about in his show. This intimate sharing, even after the show was officially over, was one of the most touching parts of the evening because it showed how truly honest the play was.

Rodwin could use the conversational tone he used during the epilogue to find more simple moments during the show. There were times when the quieter, more serious moments in the play seemed a little pushed and presented. Rodwin’s charismatic energy and amazing story are so engaging that he could trust his natural conversational tone and perform a little less, especially in the moments of pure vulnerability.

F*ck Tinder: A Love Story is a wonderfully written piece that will leave people both laughing and pondering their own love life and what it means. Above all, this show will have audiences joyfully exploring the hilarities, pitfalls, pains, and wonders of this crazy thing called love.