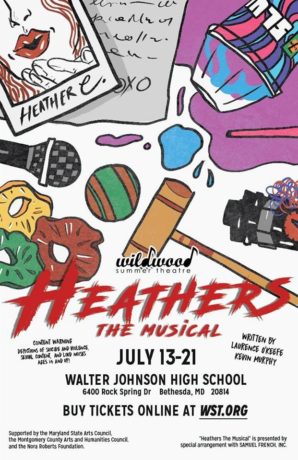 Originally an off-Broadway production, the show, like the film, has enjoyed cult hit status and is enjoying a resurgence in popularity, with a new production about to premiere on London’s West End. Wildwood Summer Theater’s production, which is acted and crewed exclusively by young adults between the ages of 14 and 25, does the musical justice with extremely strong performances from the young cast, eliciting cheers from the audience throughout the show.

Taking on the starring role of Veronica is Becca Glatt, who held the audience in the palm of her hand from the very first line. Ms. Glatt just graduated from UMBC with a degree in Chemical Engineering and is about to start a new job with IBM. I hope she’ll make time for community theater once she starts working because it would be a shame to never see her perform again.

Glatt’s voice is pure and strong and her chemistry with co-star JD, very well played by Jehan Silva, who was also the show’s fight choreographer and projections assistant, was apparent and made the very extreme relationship feel natural and authentic. Silva’s JD is funnier than others I’ve seen, which actually made me like him more. Don’t worry, he’s still brooding and dark, but with an extra bit of irony mixed in.

The three Heathers, played by Julie O’Hara (Heather Chandler), Olivia Speck (Heather McNamara), and Alexis Leder (Heather Duke) work well together as part of the Heathers team, but Julie O’Hara’s Heather Chandler was particularly strong, especially in the second act where she appears as a ghost serving as the voice of Veronica’s conscience. I appreciated how the two remaining Heathers distinguished themselves as characters once they were able to step out of Heather Chandler’s shadow.

The jocks of the story, Judah Canizares as Ram Sweeney and Maxim Sobchenko as Kurt Kelly, were pitch perfect. Canizares and Sobchenko easily imbued these characters with such a mean streak and lack of brains that you don’t even feel bad for their untimely demise.

If you are a fan of the cast album, you’ll notice that the main song sung by this duo, “Blue,” has been deleted from the production and replaced with another song called “You’re Welcome.” This change comes from the creators of the show who felt that “Blue” “lacked any real or human insight into the idea of date rape and the culture of teenage male entitlement that allows it to exist.” I admit that I wasn’t a fan of “Blue” and didn’t feel like this new song was any better, but you be the judge. You’ll also find a few other changes to the cast album, some I appreciated, and some were a bit jarring, but for newbies, the entire book should feel seamless.

Virtually all the performances in the show were strong so it is difficult to call out everyone, but I did want to mention excellent performances by Daniel LaMond as Ram’s dad, Alex Adah as Kurt’s dad, and Aryn Geier as Ms. Fleming. The adult characters in this show are often overshadowed by the younger cast members (not that LaMond, Adah, or Geier are older, just that they played older characters) and they did a great job of feeling like adults, not as kids trying to play adults.

The rock band, conducted by Kathryn Bailey, made flawless music that filled the auditorium. I mean it as a compliment when I say I didn’t really notice the music, in that it was played so well that it felt completely natural to what was happening on stage.

Most of the technical aspects of the production worked well with the one exception being the lighting, which was often too dark or seemed nonexistent. This was especially noticeable when the characters climbed to the top of the large set and during the song “Kindergarten Boyfriend,” sung by the character Martha, who was well played by Mercedes Blankenship. Unfortunately, the original lighting design was lost due to a technical glitch, so this lighting design was put together during the run of the show.

If I was nitpicking, I’d also pick on the costumes, which could have been a bit more 1980s, although JD’s trench coat and Veronica’s outfit were both perfect. I also wished the set  would have been a bit smaller and more moveable, allowing the cast an easier way to make new spaces.  But overall the performances and the great music eliminated any reservations I had about this show and I left humming some of the tunes.

If you are one of the millions of people who made the film Heathers a cult sensation, or if you enjoy a great rock musical, Heathers the Musical is for you. Just keep in mind that this production, like the film it is based on, has content that will not be appropriate for children, including sexual situations, suicide attempts, murder, and cursing. However, if you are of age, I highly suggest you motor on over to Walter Johnson High School to see Wildwood Summer Theater’s production of Heathers the Musical. It is really is so very.

Running Time: Two hours and 15 minutes, with one 15-minute intermission.