Monica Dionysiou gives audiences a bravura hour of solo storytelling in her Aphrodite’s Refugees, which is based on the experiences of her family during the warfare that consumed Cyprus in the 1960s-80s. Strife between Greek and Turkish Cypriots, and the Greek and Turkish militaries, broke out repeatedly during this period, forcing families into one exile after another, as villages were destroyed and territory passed from one of the warring parties to the other and back again. 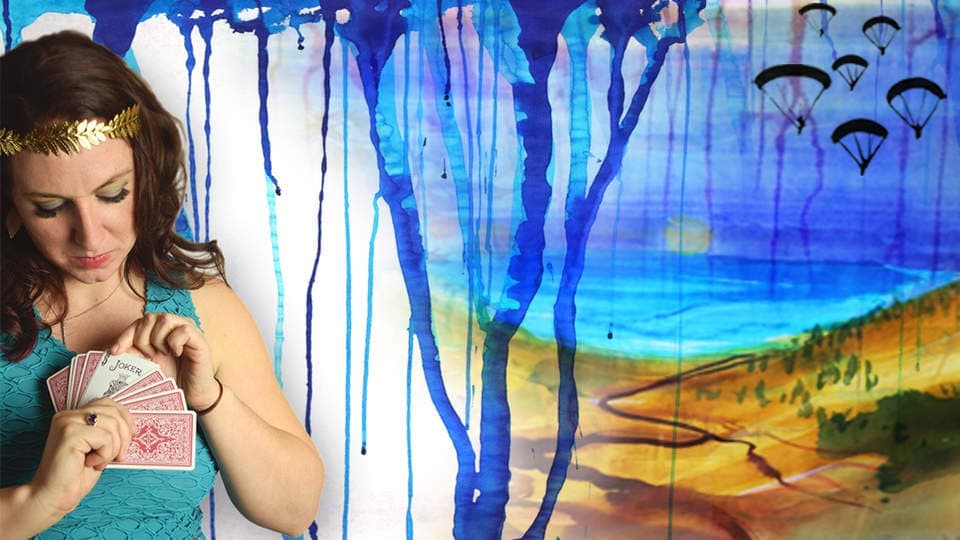 Dionysiou tells the story in a variety of voices.  Her present-day narrator introduces men and women of various ages – from children to old men – to each of whom she gives their own distinct vocal and physical characterization. Their emotions range from humor to courage to terror to perseverance.

A little girl fears for her life as her village is threatened by Turkish forces. An old man intentionally loses card games to help provide a few shillings to boys who have little. A soldier who has performed courageously in skirmish regrets killing boys just like him, and, on another occasion, busts up the engagement party of a girlfriend whose father was marrying her off to a richer man. The family’s mother makes a foolhardy, but successful, foray back to her old village, now in Turkish hands, to retrieve some of the family’s property. The family waits anxiously for weeks for word of their father, off fighting in one of the wars.

As a framing device, Dionysiou creates a legend – referenced in the title – of the Greek gods Aphrodite and Ares playing cards over coffee each morning. When Aphrodite wins, the chances for peace increase. When Ares wins – and he has a tendency to cheat – war takes control of people’s fates. The Greek gods were famously capricious, and the card game is an effective metaphor for the random events that disrupt the family’s life.

Artist Aaron Young illustrates the story through live painting on paper screens stage left, which depict the land itself, an attack by a Turkish fighter plane, a scorpion, a racehorse, and an ever-growing tent city, as well as projections of maps of the island and flames as villages are burned.

Dionysiou runs much of the technical side of the production herself, for example turning on an orange light and a reverb sound effect when describing the card game. She turns on recordings of the voice of a woman who speaks only Greek, turning upstage to mime her physicality, then turning around to translate the woman’s words for the audience. Quite charmingly, she begins the production by handing out cheese and grapes to audience members.

Unlike the stories of many present-day refugees, the family’s story turns out well in the end. They stay together and are resilient.  Everyone survives, a new home becomes available, and Dionysiou’s father immigrates to America where he is welcomed and able to build a new life. But they have had to endure fear, hardship, repeated dislocation, poverty, and PTSD.  The great strength of Aphrodite’s Refugees, conveyed by Dionysiou’s storytelling virtuosity, is to show the universality of refugee’s stories by relating the particulars of a few individuals’ lives.