Conceived and choreographed by Kristen Brooks Sandler for Harlot Productions, Gilded depicts “a steampunk monarchy in decline,” including two illicit love affairs, Byzantine intrigue culminating in a palace coup, and the malignant growth of insubordination among the populace. An ambitious agenda, to be sure, for a show that runs under an hour, much less one that tells its story without the benefit of spoken dialogue. 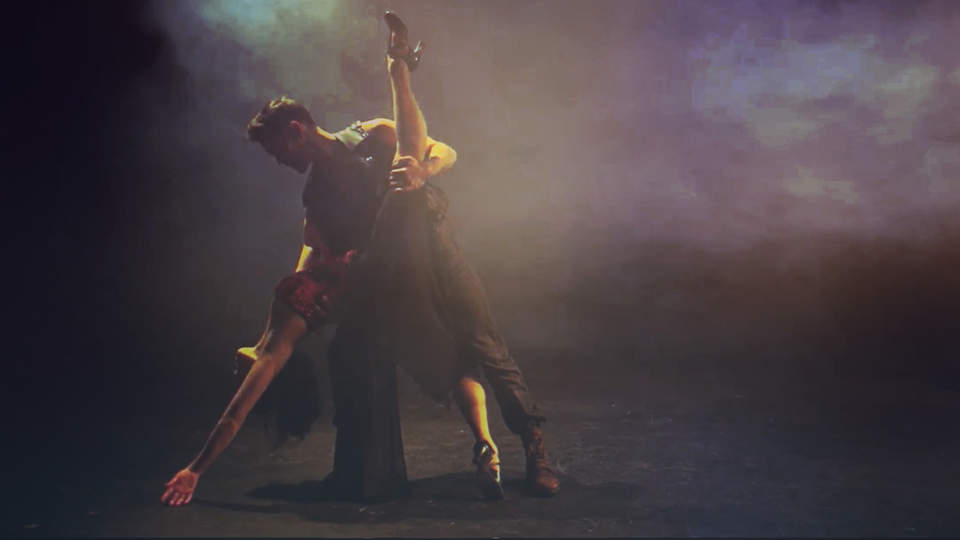 Such ambition occasionally, in the words of the Bard, “o’erleaps itself and falls on th’other,” like an airborne ballerina who flubs the landing. I’m not sure I could have followed the plot without the aid of the synopsis in the program, particularly since Yamil DeJesus’ costumes, thinly gilded rehearsal garb at best, do little to delineate who’s who.

Worse, the piece is not always on sure footing in terms of tone. It’s all very well to point out that courtly ritual reduces people to automatons, for instance, but when our first sight of the King (Vincent Kempski) finds him dancing The Robot, there doesn’t appear to be much farther he can fall.

Fortunately, Sandler’s choreography is generally less awkward and is never less than gracefully performed. Though clearly influenced by Bob Fosse, especially in her use of the ensemble as a perverse and vaguely threatening mass of writhing limbs, Sandler manages many clever touches that are all her own, such as representing gossip by an open hand under the mouth that curls into a fist, vividly conveying how words can become weapons.

Sandler deserves credit as well for making the various romantic couplings more ethically ambiguous than one might expect. The liaison between the King and the Rook (Morgana Mauney), which allegedly so scandalizes the land, is actually rather innocent, more like a prepubescent pantomime of passion than the genuine article, whereas the ostensibly chivalrous devotion of the Knight (Neville Braithwaite) for the Queen (Courtney Liu) generates an increasingly unsettling amount of heat – a pointed reminder of how easy it is in politics to misidentify where the true danger lies.

Attention should also be paid to Him (Colin Scott Cahill), a troubadour figure who sings the 11 traditional songs, as arranged in techno style by Anessa Marie, that accompany and comment upon the action. Most notable among these is the ballad that gives this show its title, “A Bird in a Gilded Cage,” which cautions us that greed can never take the place of love, but also that it will never stop trying to do so. Cahill’s diction can be garbled at times, much like the show itself, but that message comes through loud and clear, right up to a final image that will leave every head uneasy, whether or not it wears a crown.