Watching Lindsey Griffith’s one-woman performance Horse People, I can’t help but feel as if I’ve stumbled into a dream. Papier-mâché horse heads, large overhead projections, enormous balls of yarn, Horse People is an admittedly very weird foray into the neuroses of three generations of women. I personally found it hilarious, though not in a laugh-out-loud way, more with a charmed, what the hell, wide-eyed appreciation. 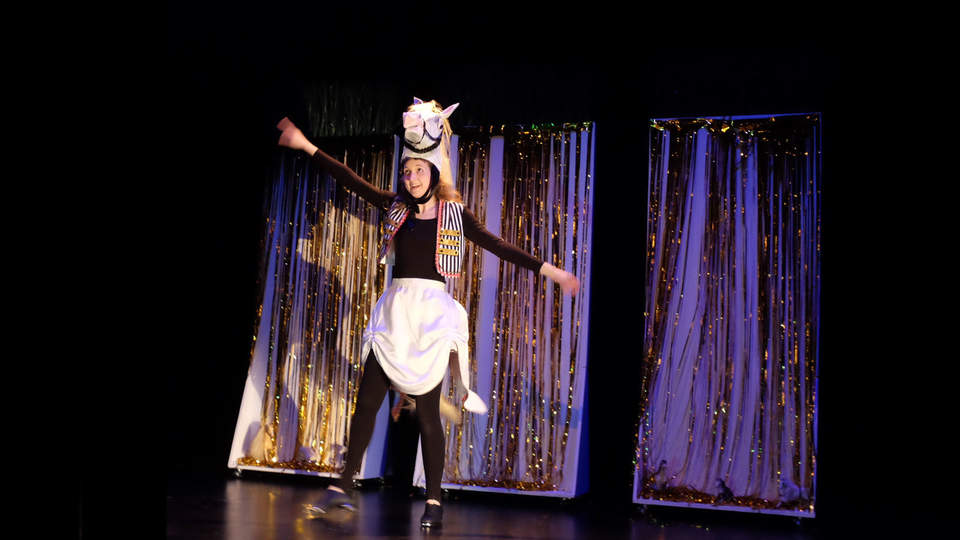 Griffith’s fifty-minute performance begins thus: have you ever loved a rock? What seems like a rhetorical question is often a surprisingly genuine one, as she engages directly with the audience– or rather, “guests”– while going off on a long manic tangent about her fascination with certain textures– wet cement, Yoplait whips, and of course the texture of her beloved rock. She then takes a “phone call” with her mother, a recorded projection of Griffith donning unmatched googly eyes and a wig, reminding me of a kitschy, dark suburban version of the projected wizard in The Wizard of Oz. Mom is a caricature “wine mom,” oblivious and delusionally matter-of-fact about her horse lineage. “We’re horse people,” she reminds Griffith as she gulps down red wine from a glass with a horse illustration. “I mean this literally.” Indeed, mom is convinced that her grandmother was in fact, a horse, and that her family’s “true nature” and “heritage” is . . . horse.

Next, Griffith goes “backstage” (i.e. behind one of two large sky-blue panels with tufts of fake grass on top) as mom goes on interminably about her horse pride, only to reappear in a knitted wig and overalls, with an unwieldy bunch of yarn in hand. Grandma Griffith brings her daughter back to earth with a shocking revelation, and then goes on to lecture her, and the audience, on the spiritual merits of knitting in a ridiculously over-the-top and absurdist instructional knitting segment set to the beat of a fitness class. Griffith really hits her stride here as the performance reaches its peak expression of manic compulsiveness. You’re not sure whether to be seriously worried or join in on the fun.

“I wonder what it would be like if we were stars,” Griffith wonders, “if my mother was just happy?” At the core of this oddball performance is a grain of sadness, almost imperceptible amongst so many random comical elements, rooted in recognition of a flawed humanity not as the exception, but the norm. The finale further confuses these emotions, I think productively, with a rather impressive bit of tap-dancing showmanship.

I’m not sure if Horse People is for everyone, as I imagine Griffith’s unique sense of humor can only really be heard by people on a certain wavelength. Hers is a sensibility comparable to Samuel Beckett’s weirdest plays and the sort of performance art you might encounter off-off-off Broadway. But for all the potential criticisms one may have, I personally felt at home. I’m not afraid to say that I’d also like to be Lindsey Griffith’s friend.