You Win! presents Movie Magic Live!, an evening of silly, competitive fun for movie lovers! Hosted by Jason Fraley and Ally Jenkins, this is perhaps the most interactive show at the Fringe this year. Depending on what kind of experience you’re hoping for, this is either a very good (or very bad) thing. 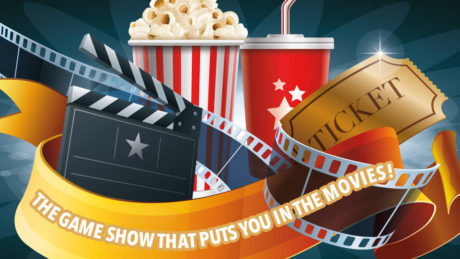 I don’t want to spoil any surprises, so I’m not going to say which films are represented, or go into the finer details of the individual contests (also, if I do that and you read this beforehand, it could be considered cheating!), but it involves a series of challenges inspired by our favorite films. The activities are physical…you may even get drenched! In the end, it all boils down to one audience member, who wins the whole shebang (and a gift basket!).

Jason Fraley and Ally Jenkins are friendly and warm from the start, and make everyone feel very welcome. Since I saw the first show, there were some definite kinks that needed to be ironed out, including technical difficulties with the projector. It also seemed as though the hosts weren’t completely up to speed on the individual challenge rules, as they had to be corrected a few times by a voice in the back. However, when they did face a hurdle, it was handled swiftly and easily, and was used as an opportunity for a joke. These are all issues that usually don’t continue after the first show. The hosts are pros, and handled the sticky moments as such. Queen Bambi also appears as an extra-special guest host (I don’t want to spoil it!), and delivers many laughs throughout the evening.

I wouldn’t call Movie Magic Live! a show– it’s an experience; a live game show that you are physically competing in. This is for movie lovers, yes, but I should emphasis who it isn’t for– wallflowers. The especially timid or easily embarrassed audience member probably won’t have the best time here. However, if you like to ham it up, then this is the perfect Fringe experience for you, especially with a group of friends!

Running Time: 90 minutes, without an intermission.