An ancient professor (Mikey Hays) ambles into the lecture hall, his collapsed posture and bowlegged, turned-out stance recalling Pantalone of the commedia dell’arte (he even wears the mask). He is a cantankerous scholar, chiding the audience for arriving late and having not done the reading. He unveils a map of a far-away continent. The interior is the land of Kudnanibonbar, a territory previously unknown to the surrounding coastal nations. The Professor introduces us to the rulers of the four nations who fought to conquer Kudnanibonbar a century ago–and for each one, he has a litany of contemptuous epithets.

A Muse Zoo is a clown troupe from Ashland, Oregon, midway through touring The Truth* through a series of Fringe Festivals in cities in the United States and Canada. Each of the nations in this history lesson is portrayed with a recognizably different style of clowning. Flowerton, ruled by Queen Petunia (Alice Glass) – whom the Professor disparages as a hippie and opium addict whose only interest in Kudnanibonbar is to expand her poppy fields – is the sort of monarchical rural fairy utopia imagined by Elizabethan poets from Spencer to Shakespeare, only to be reimagined by the 1960s counterculture. Nonetheless, this hippie utopia is under threat and Petunia must consolidate her power by avenging herself upon a vulgar anthropomorphic hornet named Garry who killed her parents and terrorized both the flowers and bees. Meanwhile, the nation of Gorgonzolia, a land of French stereotypes, allows the ensemble to show off their formidable mime skills. Jean-Pierre (Michael Dias) rises from the scion of a family of hedonistic contraband cheese dealers, to impose a dairy kleptocracy upon his nation – for him, Kudnanibonbar is more land for goats to graze and greater cheese production. 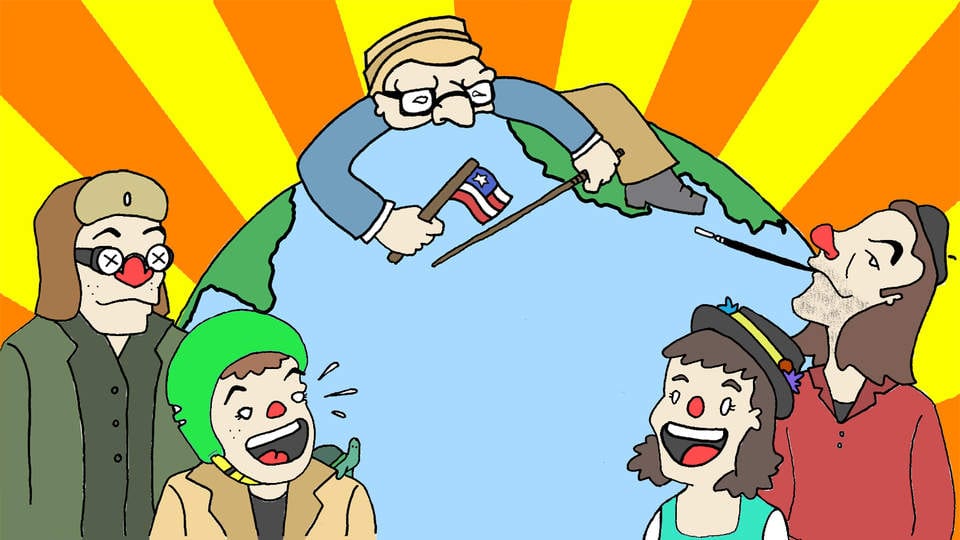 Moleville, ruled by the tragic despot, King Molbius (Sarah Brizek), is a satirical subterranean Soviet-style dystopia (perhaps also an homage to The Residents’ series of concept albums regarding the Mole people?). The people live in darkness and the earth around them is poisoned, so many drink to speed up their deaths – Moleville is an underworld of existentialist clowning. The loss of his child has led King Molbius to seek the clean soil of Kudnanibonbar. Finally, there is Prince Jeff of Benmark (Kenzie Bizon) a crash helmet-wearing chill dude with an Oedipus complex the size of the Pentagon. His only friend is a turtle named Arnold to whom he is constantly chattering. Benmark is a courtly culture, with the sort of palace intrigue worthy of Elsinore Castle – but Jeff’s aim is to turn Kudnanibonbar into a land of recreational amusement parks.

Each of the vignettes that make up The Truth* is an exciting clown show in its own right. With every member of the ensemble playing a large number of supporting roles, as well as designing, directing, and writing, the show seems to be overflowing on low-tech creativity: simple, yet effective costumes, misdirection, puppetry (Flowerton’s bees are a particularly brilliant design), and some slapstick that will have many guiltily laughing at staged violence. But what does this broad over the top comedy tell us about the world? Could it be that even an imagined utopia is subject to the cynical forces of economics and realpolitik? That even a delusional buffoon can be next in line to the crown? That the ideologies that motivate rulers and the nations they lead may originate from irrational obsessions? That there is always something that comes after the happy ending? Or is this really about bees, cheese, knife fights, red noses, dirt, and chilling with turtles?

Even as the large-scale cruelties of geopolitics lurk in the background, an evening with the clowns of A Muse Zoo is one of anarchic joy – precisely because every moment of over-the-top zaniness is a reminder that even a tyrant can slip on a banana peel.