Riot!: A Celebration of Women in Comedy was part of the District of Comedy Festival at the Kennedy Center, featuring a weekend of comedy including stand-up, improv, sketch, variety, podcasts, and even workshops. While DC’s homegrown comedy scene is quite robust on its own, it is great fun to have these nationally known acts brought together in one weekend. It was especially exciting to have five supremely talented and hilarious women all on the same bill. 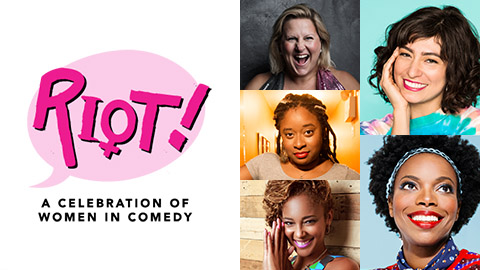 Four of the five performers were stand-ups. Sasheer Zamata, who is best known for her work on SNL, served as our host for the evening. For those who haven’t seen her Netflix special, Pizza Mind, her stand-up might be a revelation. Her bits touched on, among many things, the pathology that might lead a person to purchase eyelashes for their car and how to combat catcalling.

The second performer, Amanda Seales, plays Tiffany on Insecure and was an MTV VJ. Concentrating on women’s issues and black popular culture, she left the audience with some memorable ideas about the Underground Railroad and receiving compliments from a gynecologist that were, somehow, related.

Melissa Villaseñor is a current cast member on SNL known for her impressions including Lin-Manuel Miranda and Owen Wilson, but her set was more personal and familiar, talking about dating problems and the decorating issues facing the homebound introvert.

Phoebe Robinson is half of the 2 Dope Queens but is no less funny and relatable on her own. She shared tales from her relationship which recently entered the cohabitation stage. She also talked about the unique difficulties of interracial relationships, like how hard she felt she had to lean away from stereotypes early in her relationship.

The final act of the evening was Bridget Everett. Though she has appeared in movies like Train Wreck and Patti Cake$, unless you have seen her cabaret act, there is no way one could have been prepared for the tornado of feral entertainment she brought. Initially appearing in a spangled rainbow poncho, brandishing a paper-bag-covered bottle of booze, Everett sang three songs for the Kennedy Center audience interspersed with some world-class crowd work and glorious patter to set up the numbers (including two songs whose titles I do not believe conform to DCMTA’s profanity protocol). I didn’t expect to hear about or see nipples so extensively last night, but indeed we all did. Her enthusiasm and talent were more than enough to carry the audience along for the raunchy ride. If Everett ever starts a religion, I will be her first follower.

The most notable and refreshing aspect of all these acts, aside from their uniformly high quality, was the unselfconscious female content. Whether discussing relatable topics like dating, or the more specifically gyno-American content like vagina ownership and maintenance, there was no apology to or specific acknowledgment of the men in the audience. As male comedians always assume their lived experience of sex and identity is universally understood by men and women alike, last night’s performers took their experience as a given as well. If the men in the audience (dramatically outnumbered, by the way), didn’t quite relate to something being discussed, oh well. Maybe listening added a little capital to their empathy bank.