Although it is aesthetically pleasing—beautifully designed and performed—up your aesthetic has nothing to do with aesthetics, per se.

Instead, the production—which opened at the Blind Whino SW Arts Club just in time for the final week of Fringe—is a celebration of feminism. It is also highly original.

In fact, the piece is so modern in its sensibilities that it’s hard to believe that it is based on a trio of tales plucked from Greek mythology and written more than 3,000 years ago.

The stories are about the trials and triumphs of the Amazons, a tribe of women warriors who ruled a sliver of the ancient world. Ultimately, they were undone by the Greeks, whose soldiers were men.

Using a mixture of spoken word and song, four women occupy the stage. Their singing is a cappella—sometimes wordless, sometimes not—and accompanied by the sounds of chanting, stomping, clapping and occasional finger-snapping as they tell their stories.

The first of the stories, retold at various times, is about Hippolyte, queen of the Amazons, who is attacked by Heracles, who proceeds to rob her of the girdle that holds her spears. The defeat of the Amazons is portrayed in an ingenious bit of stagecraft, involving a mask of Heracles and a set of dominoes.

Another story depicts an Amazon who, having accidentally killed her sister, tries to bury her sorrow by leading her army against Greece. The final story tells of a different invasion; this time, it’s an attempt to rescue Antiope, sister of the Amazon queen, from the arms of her kidnapper, Theseus, king of Athens.

The piece begins with the women circling the stage, studying the names of famous men who have maligned women over the ages. The names are scrawled, graffiti-style, on the floor. One by one, the women read aloud from the writings of each of the men—Nietzsche, Napoleon, Martin Luther and even the anonymous author of Genesis—and reveal that every one of them is a misogynist.

In a scene as satisfying as any of those that follow, the women, one by one, pick up rags and literally scrub the authors’ names right off the floor. As they scrub, they sing.

Other scenes that are startling in their effect include one in which a Greek urn comes alive, and others, in which the dancers replicate the movement of Greek figures or huddle together, like football players on a field or—more likely perhaps—like a mythical monster with many arms and legs. 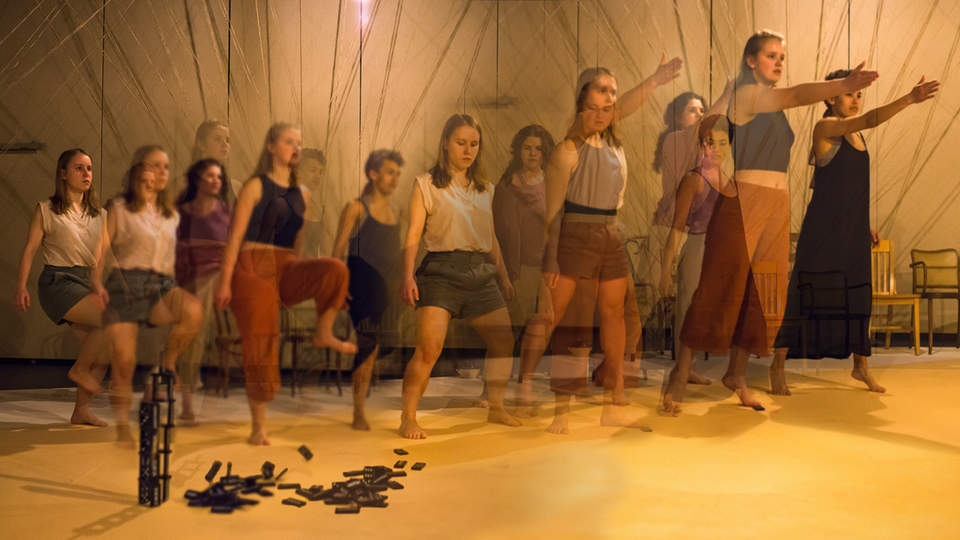 Music and movement make up a large part of the show, which was developed originally at Wesleyan University in Middletown, CT. The performers are Jess Cummings, Constance Des Marais, Katherine Paterson and Cheyanne Williams. They teamed up with a fellow student, Nola Werlinich, who is the production designer—Werlinich is also an Assistant Technical Director at Arena Stage—to create the work as undergraduates in 2016.

Although the first song in the show—the Epitaph of Seikilos—is sung in ancient Greek, most of the music comes from the American folk tradition, including religious songs from The Sacred Harp, Appalachian melodies and spirituals from the deep south. There are also two original songs, written by Jess Cummings. Katherine Paterson wrote most of the a cappella arrangements.

According to the producer, Megumi Lee, who is the only member of the fledgling company, Glass Attic Collective, who did not go to Wesleyan (she is a recent graduate of Smith College) this is the group’s first production.

I’m sure it won’t be the last. This is a very talented ensemble. Don’t miss it. up your aesthetic—and the Capital Fringe of which it is part—end on Sunday, July 29th.