“History is happening in Manhattan,” the cast sings exuberantly in Act I, as the Schuyler sisters sneak downtown in search of the American Revolution and “a mind at work.” But these words also resonate with the work taking place every night on stage. Hamilton is making history, and its impact is being felt well beyond Broadway. The musical is sparking a burst of popular interest in early American history, conversations among teachers about how to capitalize on Hamilton’s popularity with young people, and lively disagreements among scholars, curators, and history buffs about how the show represents the national past.

The musical draws on Ron Chernow’s 2005 Pulitzer Prize–winning popular biography, Alexander Hamilton, to bring this lesser-known founder out of the shadows. The musical begins with our hero’s arrival in New York from the West Indies as a young man, traces his service in the American Revolution, his accomplishments as the first Treasury secretary under President George Washington, and his involvement in what may be the nation’s first sex scandal. The musical ends with Hamilton’s early death in a duel at the hands of fellow founder and vice president Aaron Burr. Both a political tale and a character study, the musical seeks to get inside the head of an ambitious and sometimes ruthless man, famously obsessed with making his mark on history, to understand his spectacular rise and fall.

But it is less the story than the means of telling it that has won Hamilton such attention and acclaim. The brainchild of Lin Manuel Miranda, a New Yorker who grew up in the Inwood section of Manhattan and who spent summers with his grandparents in Vega Alta, Puerto Rico, the show is, in his words, “a story about America then, told by America now.” It draws on musical traditions from hip hop, to rap, to R&B in order to convey the energy, ambition, and drive of the young founders, artistic choices that have made its score catchy, quotable, and singable. And perhaps most attention-grabbing, young black, Latinx, and Asian actors portray nearly all of the historically white characters depicted in the musical, reflecting Miranda’s goal to have the staging of this national founding story “look the way our country looks.”

As an ever more multiracial America struggles for ways to acknowledge its diversity in the twenty-first century and, simultaneously, articulate a sense of American identity, Hamilton literally stages that conversation. Often described as Miranda’s most daring decision, the flipped casting challenges Broadway’s long history of using whites to play black, Asian, and Latinx roles, offering people of color an opportunity to narrate America’s origin story.

Professional historians have been blogging, tweeting, editorializing, and writing both favorable and critical reviews of the show since its opening. Hamilton deserves—indeed, it demands—this kind of scholarly attention. With its widespread appeal, the show has the potential to shape how Americans understand the nation’s early history for some time to come. And as part of a genre of fictional and nonfictional accounts of the Early Republic, Hamilton has created a common space for contemporary political debates about partisan politics, race, multiculturalism, and immigration. Moreover, as a show that has repeatedly been labeled as “revolutionary,” Hamilton needs to be explored as a historical phenomenon in its own right.

The new book we edited, Historians on Hamilton, takes up the challenge that Miranda himself made to us when he was just beginning to write the show. “I want the historians to take this seriously,” he told Ron Chernow the first time they met. From the start, Miranda sought to create an account of the founding generation that could be taken seriously. Although by his own admission Miranda didn’t take any college history classes, he acted like a historian as he worked on the play, doing research, reading Hamilton’s writings, and traveling to sites from Hamilton’s past. He read widely in early American history and consulted with experts who could help him better understand the politics and culture of the Revolutionary era.

While clearly not intending the musical as a work of academic history, Lin-Manuel Miranda hoped that academic historians would want to engage with his creative foray into the past. We took on that challenge. We believe that Hamilton offers more for historians to consider than whether its portrayal of the American Revolution and the early national period is accurate (although several of our authors do just that). We also believe that the play is about how history unfolds, and how events are narrated across generations. It emphasizes the human side of history, and what it means to have a vision for the future.

The musical strikes at the heart of what historians do: as it makes clear, history is not simply a matter of facts, but is an interpretation of the existing archival record actively constructed by whoever is serving as the historian. The musical acknowledges that there are certain things we simply cannot know—indeed, there is a whole song about how we don’t really know what went down between Hamilton, Jefferson, and Madison in the “Room Where It Happens” when Hamilton won support for his debt plan by agreeing to support a move of the nation’s capital from New York City to the banks of the Potomac. But it also, the musical insists, matters “who tells your story.” 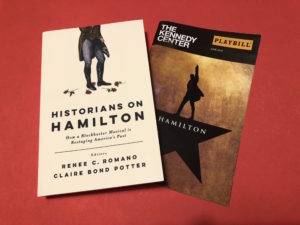 So we assembled a group of experts to tell their story about Hamilton. We believe that historians need to take Hamilton seriously because it has already demonstrated its enormous potential to shape what Americans know and understand about both the man and this era.

Hamilton has, moreover, become a site of engagement, commentary, and debate about many political issues that have long and vexed histories in the United States. The New Yorker’s Adam Gopnik described the show as a metaphor for the Obama era. “At the simplest presentational level,” he writes, “it shows previously marginalized people taking on the responsibility and burden of American history.” And yet, as some of our authors explain, despite its musical and casting choices, Hamilton still offers a traditional story of the founding, one that largely marginalizes and ignores the actual experiences of people of color in the nation’s history. Hamilton raises perhaps the most fundamentally political questions in all of American history: Who belongs in this county? Who owns—and who tells—its story?
_____

Renee C. Romano is the Robert S. Danforth Professor of History at Oberlin College in Ohio. She is the author or co-editor of many books including Racial Reckoning: Prosecuting America’s Civil Rights Murders (Harvard University Press).

Claire Bond Potter is a professor of history and executive editor of Public Seminar at The New School in New York. She is the author or co-editor of several books including War on Crime: Bandits, G-Men and the Politics of Mass Culture (Rutgers University Press).

Excerpted with permission from the Introduction to Historians on Hamilton: How a Blockbuster Musical Is Restaging America’s Past, edited by Renee C. Romano and Claire Bond Potter, published by Rutgers University Press. To learn more about the book, click here.

Hamilton plays through September 16, 2018, at the Kennedy Center–  2700 F Street, NW in Washington, DC. Tickets are being released daily for upcoming performances. There is a four (4) ticket limit per household for Hamilton. Please note that www.kennedy-center.org is the only authorized source for Hamilton tickets in Washington, DC. There are also forty $10 orchestra seats offered for all performances via lottery at hamiltonmuiscal.com/lottery.