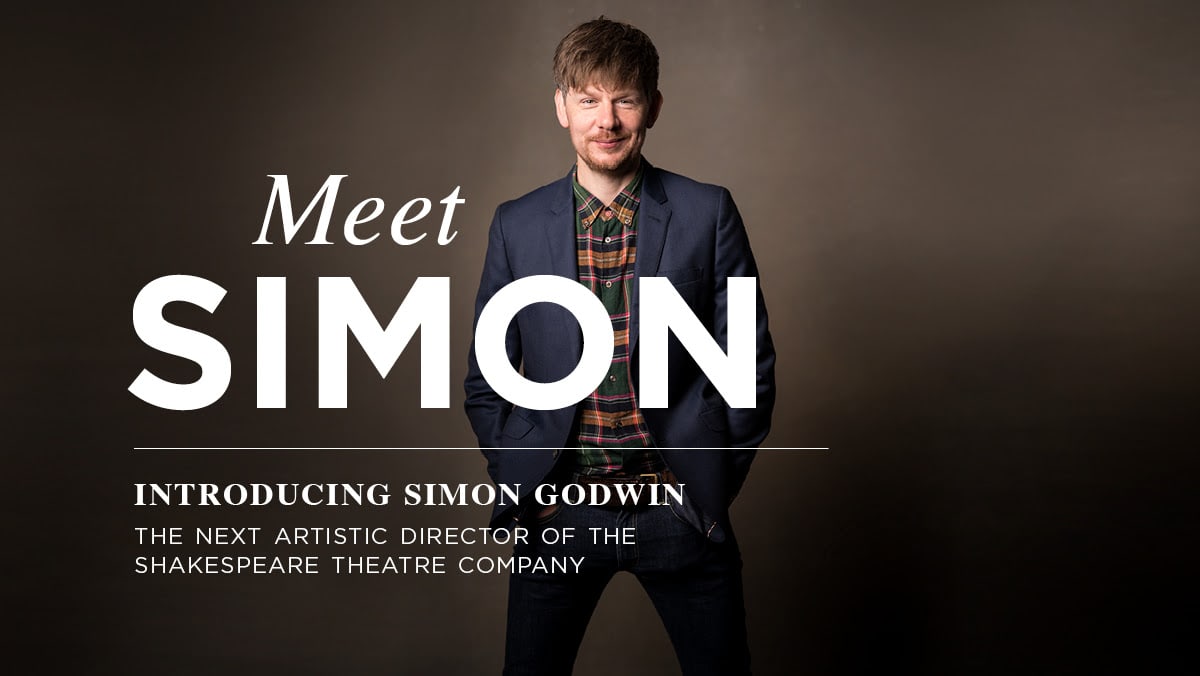 “Simon is widely regarded as a star of the next generation of artistic leadership,” said STC Board Chairman Michael Klein. “He was chosen after a nine-month global search, from a broadly diverse pool of candidates, because of his artistic excellence and proven ability to conceptualize and curate bold, energetic and innovative theatre. Over the past eight years he has directed nineteen productions of Shakespeare and other plays in leading theatres throughout England and the United States, including the Globe, Royal Shakespeare Company, the Royal National Theatre, Kennedy Center and the Royal Court.”

Godwin is slated to assume the role August 1, 2019, but will immediately begin to work with the existing STC artistic team to plan the 2019-2020 Season while continuing with his directorial commitments in London and Japan. His forthcoming production of Antony & Cleopatra with Ralph Fiennes and Sophie Okonedo opens at the Royal National Theatre, London in the Fall, followed by Timon of Athens at the Royal Shakespeare Company starring Kathryn Hunter as Timon in December 2018. Later next year Simon will make his Tokyo debut, directing a Japanese cast in Hamlet for Theatre Cocoon.

“Despite his many commitments Simon is eager to plan his first season,” said STC Artistic Director Michael Kahn. “It’s important to me and him that his debut season is his own, rather than one he inherits and is committed to deliver. He has some wonderful ideas and I’m looking forward to supporting him in any way I can to help him achieve his vision.”

In 2009 Simon became Associate Director of the Royal Court. While there he directed seven world premieres, including Routes, If You Don’t Let Us Dream, We Won’t Let You Sleep, NSFW, The Witness, Goodbye to All That, The Acid Test and Wanderlust.

In 2013 he made his debut at the National Theatre with Eugene O’Neill’s Strange Interlude followed by George Bernard Shaw’s Man and Superman.

His recent work in America fueled a desire to relocate across the pond and lead STC. His production of The Cherry Orchard, staged at New York’s Roundabout Theatre Company in 2016, Measure for Measure at the Theatre for a New Audience in 2017, and Hamlet for the Royal Shakespeare Company, which later played at the Kennedy Center as part of its international tour, were celebrated for their fresh, timely and contemporary relevance.

“Working in the U.K. for the Royal Shakespeare Company, the National Theatre and the Royal Court, I felt a natural synergy with STC’s exceptional work,” said Simon Godwin. “Michael Kahn has built a strong legacy by creating one of the leading classical theatres in America and transforming the arts scene in Washington, D.C. I look forward to building on his enormous success by continuing to create high quality, exciting, inclusive and diverse theatre that welcomes all audiences.”

Godwin’s dedication to directing inventive classical theatre in both the United Kingdom and the United States has not only attracted actors such as Ralph Fiennes to work with him (George Bernard Shaw’s Man and Superman), it’s also earned him the reputation as a director who effortlessly makes bold artistic choices.

His production of Hamlet for the Royal Shakespeare Company, which played at the Kennedy Center in May 2018 as part of its international tour, was the first time the RSC cast a black actor in the role of the Danish Prince. It proved to be a landmark production for the RSC.

“I’m delighted that Simon has accepted the role of Artistic Director,” said STC Executive Director Chris Jennings. “He’s incredibly talented and he’ll bring a fresh energy and vibrancy to STC. Simon has a unique affinity for making classical work that speaks to today’s audiences and I think we are lucky to have a person of such talents coming to work in D.C. I can’t wait to see what art he creates on our stages.”

Simon began directing at Cambridge University, where he received a degree in English. After graduating he founded Stray Dogs Theatre Company and began producing classical work including All’s Well That Ends Well, Anouilh’s Eurydice and the 18th-century opera Inkle and Yarico at the London Fringe.

In 2001 Simon became Associate Director at the Royal and Derngate Theatres in Northampton, where he worked as the deputy to the Artistic Director, Rupert Goold. His productions there included Everyman, Habeas Corpus and Relatively Speaking.

In 2005 Simon began a two-year post graduate program at the London International School of Performing Arts (LISPA), where he studied physical theatre and devising. In 2008 he joined Tom Morris, as the Associate Director of The Bristol Old Vic, where he directed The Little Mermaid, Krapp’s Last Tape/A Kind Of Alaska, Faith Healer and Far Away.

In 2009 Simon became Associate Director of the Royal Court. While there Simon directed seven world premieres, including Routes, If You Don’t Let Us Dream, We Won’t Let You Sleep, NSFW, The Witness, Goodbye to All That, The Acid Test and Wanderlust.

Simon made his debut at the Royal National Theatre with Strange Interlude followed by Man and Superman. When Rufus Norris became the new Artistic Director of the NT in 2015, he invited Simon to become part of his team of permanent Associates. Since then Simon has directed The Beaux’ Stratagem, Twelfth Night and, this September, opens Antony & Cleopatra with Ralph Fiennes and Sophie Okonedo. Simon has also enjoyed working with the Royal Shakespeare Company. In 2014 he directed The Two Gentlemen of Verona followed in 2016 by an acclaimed Hamlet, which toured to the Kennedy Center, Washington D.C. in 2018. Simon will return to the RSC this fall to direct Kathryn Hunter in the titular role in Timon of Athens.  In 2019, Simon will make his Tokyo debut, directing a Japanese cast in Hamlet for Theatre Cocoon. In 2012 Simon was awarded the inaugural Evening Standard/Burberry Award for an Emerging Director.

ABOUT THE ROYAL NATIONAL THEATRE, LONDON

At the National Theatre, we make world-class theatre that is entertaining, challenging and inspiring. And we make it for everyone. We aim to create work for the widest possible audiences with new plays, musicals, re-imagined classics and new work for young audiences. Our productions are seen in the West End, on tour throughout the U.K., on Broadway, internationally, and in collaborations and co-productions with partners around the world. Through NT Live, we broadcast some of the best of British theatre to over 2,500 venues in 65 countries.

In 2017-2018, we opened 20 productions in our three theatres on London’s South Bank. On top of that, we toured more work across the U.K. than at any other point in our history, with 10 productions visiting 52 venues in 44 towns and cities. Worldwide, 3.3 million people bought tickets to our award-winning productions, and a further 4.7 million people engaged with us through our free work, learning and participation activity, and in-depth digital content. Our extensive learning and participation programs opens up theatre to adults, families and young people across the U.K. We support drama and creative education in schools through our performance and writing programs like Connections, New Views and Let’s Play. Over 58% of U.K. state secondary schools have signed up to our free streaming service, On Demand in Schools since launching in 2015. Public Acts, our new initiative to create extraordinary acts of theatre and community, launched in 2017 in partnership with eight visionary community organizations and the Queen’s Theatre Hornchurch.

Under the leadership of Artistic Director Michael Kahn and Executive Director Chris Jennings, STC’s innovative productions inspire dialogue that connects classic works to the modern human experience. The Company focuses on works with profound themes, complex characters and poetic language written by Shakespeare, his contemporaries and the playwrights he influenced in order to preserve and promote classic theatre—ambitious, enduring plays with universal themes—for all audiences.

A leader in arts education, STC has a stable of initiatives that teach and excite learners of all ages, from school programs and adult acting classes to accessible community programming like play-relevant discussion series and the Free for All. For the past 25 years the Free For All program has offered an annual remount of a popular production completely free of charge to all audience members.

Located in downtown Washington, D.C., STC performs in two theatres, the 451-seat Lansburgh Theatre and the 774-seat Sidney Harman Hall. In addition to STC productions appearing year-round, these spaces also accommodate presentations from outstanding local performing arts groups and nationally renowned organizations. The Company has been a fixture in the vibrant Penn Quarter neighborhood since 1992.