In  January 1666, famed diarist Samuel Pepys saw a performance of the William Davenant Macbeth and called it a “strange perfection.” The production that just opened at the Folger Theatre is strangely perfect too. Dated two weeks after the Great Fire of London, in September of the same year, the Folger Macbeth is set in the notorious madhouse, Bedlam, which was untouched by the fire. A limited run produced in collaboration with an international team of scholars, this Macbeth is luminous in every detail, but it is far more than a successful period piece. It is a meditation on the toxic combination of ambition and insanity.

This production, directed by Robert Richmond, was over two years in the making. It began with a 2014 Folger Institute workshop led by theater historian Richard Schoch and musicologist Amanda Eubanks Winkler. It is part of a larger project, “Performing Restoration Shakespeare,” sponsored by the Arts and Humanities Research Council-UK and Queen’s University Belfast, in partnership with the Folger Shakespeare Library, Shakespeare’s Globe, and the Shakespeare Birthplace Trust. It brings together scholars, theatre artists, and musicians to explore how and why Restoration adaptations were so admired, and how and why they can flourish today.

Charles II, also known as the “Merry Monarch,” was restored to the throne of England in May of 1660. The Restoration era was known for its hedonism; music, dance and theatre were once again popular after the privations of Puritanism. Actresses were introduced to the stage, and you might notice Charles at Lincoln’s Inn Fields or Drury Lane with one or two mistresses.

The Fire itself destroyed 373 acres of the city. About 13,200 houses burned, and 84 churches. It was a time of religious bigotry and xenophobia—the Fire was falsely blamed on Catholics and foreigners. Over 100,000 people became homeless. The event became a favorite subject of 17th-century conspiracy theorists.

Bedlam (also known as Bethlem Royal Hospital) was built on a sewer. Some patients were afflicted by poverty, epilepsy or dementia. Others were simply inconvenient for family members. Although public visitors were a source of income, patients often went hungry. They were kept in chains, tortured, and bled. A well-known landmark, the hospital eventually became a symbol of madness itself. Jonathan Swift is reported to have remarked, where better to recruit the nation’s politicians than Bedlam, since the inmates cannot be any more insane than the ones in power!

The conception of putting on Macbeth in a mental institution offers each actor the opportunity to play two parts at once, in a sense. The result adds an additional level of danger – an actual murder takes place – and creates a rare and intense theatrical experience.

Ian Merrill Peakes as Macbeth enhances his reputation as a first-rate classical actor. He has a gift for playing troubled men—his Timon of Athens was strikingly original—and here he portrays a character within a character, which suits his talents wonderfully. As an inmate of Bedlam, he was convicted for revenging the death of his wife. His violence explodes more than once, and we are never sure when it might happen again.

As Lady Macbeth, Kate Eastwood Norris (a superb Mary Stuart in the eponymous Folger production), is unusually self-possessed at first. She becomes more and more distressed as her husband unravels. It is a vibrant performance, with an appealing layered quality. The Davenant script holds closely to the plot of the original, while cutting some of the longer monologues and rendering others more initially comprehensible. The Macduffs are depicted as a virtuous couple, in contrast to the bloodthirsty Macbeths. Lady Macduff (Karen Peakes) shows great concern about her husband, although Lady Macbeth seems anxious to get rid of her. 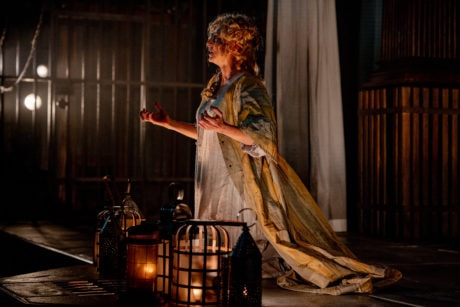 Karen Peakes’ Lady Macduff is exceptionally well-acted. Chris Genebach, at his best here, is an emotional and principled Macduff. His abandonment of his family is explained in Davenant’s version as an inability to imagine the level of cruelty they will face.

The Three Witches—Rachael Montgomery, Emily Noël, and the lovely Ethan Watermeier in drag–sing and dance, and each one has a unique sensibility. They are beautifully performed, and essential to establishing the tone of the production. Louis Butelli has an interesting take on Duncan; he is the Warden of the asylum, and he resembles Charles II somewhat. He seems far more arrogant and entranced with his own power than the benevolent figure we know from Shakespeare, which is refreshing. Andhy Mendez is an unusually compassionate Banquo, which makes sense when you discover that as an inmate he is a clergyman hoping to be released for good behavior.

Malcolm (Rafael Sebastian) benefits from cuts to one of his more confusing scenes. He and Donalbain (John Floyd) are a fine pair of embattled brothers. Jeff Keogh’s role as Seyton is expanded in the Davenant version, and he establishes himself as an individual instead of falling into the trap of being a generic attendant of his King. Jaysen Wright as Lennox fulfills his role with energy and flair. Owen Peakes as Fleance proves that the Peakes family has an equally talented member of a new generation.

It is true that some of Shakespeare’s more memorable lines—Duncan’s silver skin laced with his golden blood, for example–are missing, but this absence is more than compensated for by the glorious music, dancing, and physical production. We can see prison bars, and occasionally the sufferings inflicted on the patients behind them. Lanterns are everywhere. The costumes are superficially lavish, but then we notice that they are edged with mud. The stage pictures are eloquent and always surprising.

William Davenant was a colorful figure. He encouraged the rumor that he was Shakespeare’s natural son, though it is probably unlikely. He was declared guilty of high treason by Parliament, for participating in a Royalist plan to use the army to occupy London. He was knighted by Charles I for running supplies across the Channel during the English Civil War. His nose was disfigured by syphilis, and was the subject of much bawdy comment.

In Robert Richmond, he has found a director who brings him into the 21st century. Surprisingly enough, he seems to belong there.

Claude Fretz – Research Fellow in the School of the Arts, English and Languages at Queen’s University Belfast.