One of the most beloved musicals in Broadway history, Fiddler on the Roof has made a smashing comeback in New York with the National Yiddish Theatre Folksbiene’s Off-Off-Broadway production at the Museum of Jewish Heritage. Already extended twice by popular demand (now through November 18) and selling out for every performance, the current version (which made its debut in Israel in 1965) is presented in a Yiddish translation of the familiar Broadway book (Joseph Stein) and lyrics (Sheldon Harnick) by Shraga Friedman, quoting directly from Sholem Aleichem’s series of stories about “Tevye the Dairyman,” written in Yiddish between 1894 and 1914, and giving the eponymous narrator’s view of Jewish life in a village in turn-of-the-century Tsarist Russia.

If you know Yiddish, it is, without question, a must-see. And if you have any hesitation about attending a three-hour show in a language you don’t speak, let me assuage your concerns immediately. You don’t have to be of any particular linguistic base, ethnicity, or religious affiliation to comprehend the beauty and significance of this work or to be touched by the characters and their story; you just have to be human. So, whatever your background, do yourself a favor and go (I’m of Scottish and Dutch Protestant descent, and I was thoroughly enthralled, impressed, and delighted with this rendition of one of my all-time favorites)!

Aided by well-placed supertitles in English and Russian (at a readily-legible angle and height not too far above both sides of the stage, and with a look that conforms to the overall scenic design), the joys and challenges faced by Tevye, his family, and his community are abundantly clear in the production’s expressive music by Jerry Bock, resonant direction by Joel Grey, musical staging and choreography by Staś Kmieć (the legendary Jerome Robbins provided the original direction and choreography for the English-language Broadway premiere in 1964), and rich performances by a twelve-piece orchestra conducted by Zalmen Mlotek (with Andrew Wheeler serving as Assistant Conductor) and a large emotive cast led by the magnetic Steven Skybell in the starring role.

Skybell is a revelation as Tevye, bringing his engaging voice, spirited moves, and range of feelings to his portrayal of the eminently likeable protagonist. Set in the fictional Anatevke in 1905, the narrative gives his personal perspective on a time in history marked by dramatic socio-political change and, ultimately, on the pogroms that would force Jewish villagers from their homes and necessitate their emigration, as with Tevye, his wife, and their youngest daughters, to America (it’s particularly affecting that the theater is within viewing distance of the Statue of Liberty and the subject is one that relates so directly to our present-day immigrant populations).

Whether expressing his devotion to age-old “Tradition” or his willingness to consider the advantages and disadvantages of change (with his daughters’ desire to be married to the men they love, rather than the Matchmaker’s choices), imagining what life would be like “If I Were a Rothschild” (a change from Harnick’s original lyrics “If I Were a Rich Man,” referencing a vignette by Aleichem and a common Yiddish expression), ebulliently drinking with his friends and toasting “To Life, Lekhayim” or weaving a fantastic tale to tell his wife (“The Dream,” brilliantly staged with a shadow play, masked figures, and a towering specter), Skybell’s characterization is deep, fully rounded, and three-dimensional, underscored by the clarity of Dan Moses Schreier’s sound design and Peter Kaczorowski’s evocative lighting.

Among the most memorable of the famous supporting roles are the hilariously meddling busybody and Matchmaker Yente, played with spot-on comedic control by the terrific Joanne Borts in the performance I attended, and Drew Seigla’s youthfully intense and committed Socialist scholar Pertshik, who tutors Tevye’s daughters, falls in love with his second-born, and is sent to prison in Siberia for his radical ideas.

From the ensemble’s exuberant folk dances and solemn ceremonies that punctuate the story to the revealing conversations and unforgettable songs that strike a balance between humor and pathos (“the happiness and tears” of “Sunrise, Sunset”) – all delivered in the genuine style and actual language (including some bits of Russian dancing and dialogue) that the characters would have used – everything is this production bespeaks accuracy and authenticity. The intimate space of the theater and the earthy artistic design also serve to reinforce the immediacy and sincerity of the narrative, with a sparse set by Beowulf Boritt that consists of simple wooden tables and chairs, a cart, and hanging background panels of beige paper and cloth (the central one inscribed with the Hebrew word “Torah” – the source of the characters’ deeply-held beliefs and time-honored customs and observances), and modest costumes by Ann Hould-Ward, in natural fabrics and shades of grey, black, and white (with some touches of color for scenes of celebration).

Along with the historic specificity and cultural veracity of this unforgettable Yiddish translation of Fiddler on the Roof, comes a universal theme that everyone, everywhere should understand: that, despite the uncertainties and instabilities of life (which can be as precarious as the metaphorical title), and the sense of self and connection to community provided by tradition, the most effective and lasting change, which moves society forward, is born out of love, respect, acceptance, and empathy, not hatred, domination, discrimination, or force. It’s a message our world still needs to learn. 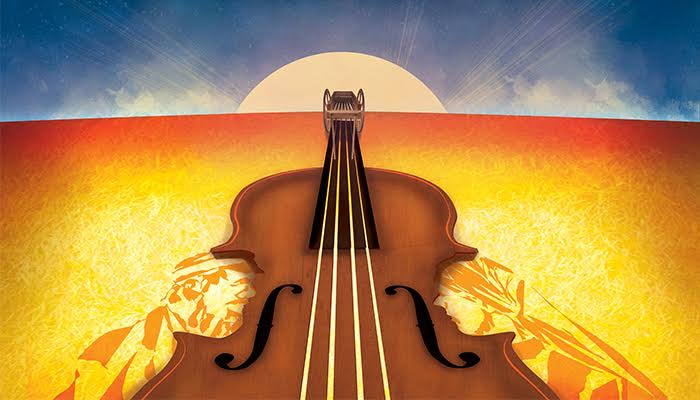