Long before the recent shooting at the Tree of Life Synagogue in Pittsburgh, Derek Goldman had planned to direct a production of Our Class with student actors at Georgetown University. It is a play whose timeliness was wanted by no one. 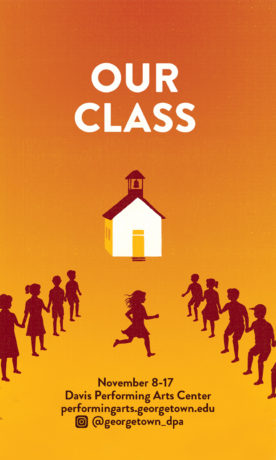 Six years ago, Goldman directed a professional production of Our Class at Theater J with the same artistic team now on board for the Georgetown production. At the time, Tzvi Kahn, in his DC Theater Arts review, called the play “a Holocaust-era case study in the moral degeneration of individuals in the context of societal descent into genocide and madness.” At Georgetown, that case study will be told by a new generation.

Based on a true story and set in a classroom in a small town in Poland named Jedwabne, Our Class has a cast of ten—half are Jews, half are Catholics—whose story begins when they are students. The play dramatizes, as Kahn wrote, how “their pre-war friendships disintegrate amid the Nazi conflagration.”

The original text written in Polish by Tadeusz Słobodzianek has been adapted by Norman Allen from a literal translation by Catherine Grovesnor, and its idiom is youthful and fresh.

Just as significantly, the actors in the Georgetown production are closer to their characters’ age than were the actors in the Theater J production, and so they too will be bringing their own contemporary sensibility. Here, for instance, is a candidly personal Q&A with one of the student actors.

Who do you play in Our Class and how do you relate to them?

Nicole Albanese: I play the role of Dora in Our Class. Dora wants to be a movie star when she grows up, and I want to be an actor, so I relate to Dora in having big dreams. I think we both have a fire within us—a certain spark. Dora is relentless in pursuing her dream—she is a fighter, and though a significant amount of adversity is thrown her way, she never stops fighting. This is a quality I really admire in Dora; she never shrinks into the small, quiet role of a victim. This is a quality that I believe I also hold within me, but Dora has inspired me to embrace my strength, and to be resilient.

What is Our Class about from your character’s point of view?

Dora is able to take on an interesting perspective on everything that happens in Jedwabne due to the construction of the play. She is alive in the first act, and after her death is able to engage with her classmates as a ghost. Therefore, while Dora is horrifically betrayed by her classmates in the first act, the incredulousness, rage, and confusion that these betrayals incite in her are put into perspective after her death. As a ghost, Dora sees her classmates continue to suffer, to find joy, and to invest themselves in the foolishness of human concerns. Therefore, for Dora, the class is never truly divided or broken, especially because they are reunited in death. The class, however, is morphed into something grotesque and strange as it is put under the mounting pressure of neighbors turning against neighbors.

How has rehearsing and performing in Our Class affected you?

This role has been the most difficult role I have ever worked on. The play deals with a wide range of dark topics, including genocide and sexual assault. It is impossible to not be affected by this material, especially when stepping into the shoes of someone going through it all. Therefore, this process has really required a deep connection with cast members, and a constant checking in with how we have been feeling. The cast has really looked out for each other throughout the whole process, which has been a blessing. It has been about finding a balance of allowing myself to be affected, because I believe it is important to let the horrors hit me, but also protecting myself from emotional harm. But although this process has been difficult, I believe it has really changed me as an actor and as a human being, and allowing oneself to be changed is part of theater.

Why is it important for people to see Our Class right now?

Evidently, Our Class has been made very relevant by certain events. The narratives of sexual assault have attained a greater weight in the light of the Kavanaugh hearings, and the shooting at the Tree of Life Synagogue was a clear, horrifying reminder that anti-semitism is still resulting in needless violence. The Pittsburgh shooting particularly made all our hearts hurt deeply as a cast. However, even if these events had not happened, it would have still been important to see this play; these events are not anomalies, they are evidence of hate that exists in the fibers of society. Our Class tells a story that has repeatedly been denied, silenced, and pushed under the rug. It is a story that needs to be heard to give justice to the people who died in Jedwabne, and to serve as a continual reminder that anti-semitism is not something we have moved past as humanity: neighbors still hate their neighbors, neighbors still kill their neighbors.