If you’re in a mood for some boisterous joy this holiday weekend—some soul-rousing solos and heartbreaking harmonies in the tenor/bass range—nab a ticket to The Choir of Man. The touring concert show, performed by nine magnificently talented men with roots in Ireland, just stopped for a brief run at Kennedy Center. And be forewarned: remaining shows are selling out.

The Choir of Man is spirit-lifting twice over, in poignancy and pints. It’s set in an Irish pub, equipped with a dartboard and swinging bar doors. Audience members mingle onstage before the show starts. Cast members dash about the Terrace Theater joking and taking selfies with the crowd. There’s real beer on tap—the cast will later offer it in KenCen sippy cups to some lucky folks. The virile vibe is jovial and bracing, robust and embracing. Here is a happy place where blokes sing open-heartedly and dance unabashedly, and we get to enjoy their good company.

A Narrator (Denis Grindel) sets the scene with patter so poetic it’s like lyrics awaiting a melody. This is “a proper old-school pub,” says he; “there’s “no frills or frippery.” Lest we think we’re in some macho sanctum where feelings mustn’t show, the Narrator sets us straight: “This isn’t a boys-don’t-cry kind of place,” he explains.

This pub, signage says, is The Jungle, and appropriately enough the lads’ first big number is Guns N’ Roses’ “Welcome to the Jungle.” A floor mop becomes a mic stand and bottles and pans get pressed into service as a drumkit. It all seems playfully improvised, and the stage bursts with on-the-spot spontaneity, though clearly every scintilla is polished to play like clockwork.

The Narrator explains that while many pubs have a sports team or a darts team, this one has a choir. As he introduces us to each member, with a sobriquet and bio sketch, they each perform a witty bit: Tapper (Freddie Huddleston), Bore (Andrew Carter), Hardman (Tom Brandon), Beast (Peter Lawrence), Casanova (John Sheehy), Barman (Mark Loveday), Piano Man (Connor Going), and Joker (Aidan Banyard).

We will soon get to know all nine as uniquely talented individuals, but even more movingly, we will get to experience their rapturous rapport, for what they accomplish in concert—in their exquisitely synced singing and crackerjack choreography—is a male performance of such emotional lucidity and unanimity it nearly elicits tears.

A couple numbers involved an audience member invited onstage. The night I was there, Katy Perry’s “Teenage Dream” (“Let’s go all the way tonight”) was sung as an affectionate serenade to a delighted gray-haired lady as she and the soloist sat like kids at a table stage left. Immediately after, at a table stage right, Man of LaMancha’s “To dream the impossible dream” was sung ardently to a middle-aged gent while he and the soloist collaborated on building a house of cards. In both instances, there was a gentle wit and unfacetious sweetness that would win over anyone.

On Billy Joel’s “50 Ways to Leave Your Lover,” Tapper, his hair in a man bun, tore up the stage tap-dancing. And in a man-up gender-twist on Adele’s “Hello” (“I must have called a thousand times/To tell you I’m sorry for everything that I’ve done”), the entire ensemble paused mid-phrase in stop-motion and reached out as if imploringly. The mix of athletic vigor and emotional rigor on the exact same theme, regret for lost love, was stunning.

Although the concert was largely a capella, quite an array of instruments got played. Piano Man ripped into the upright piano more than once. At other times others took up a uke, a banjo, a guitar, a trumpet, bongos, and more. On the Kinks’ “Waterloo Sunset,” the pub choir turned into a veritable pub band.

As the concert progressed, the choir kept pulling out more and more emotional stops. In Luther Vandross’s “Dance With My Father” (“How I’d love love love / To dance with my father again”), the harmonies and shared sorrows were heart-rending. And Queen’s classic ballad “Somebody to Love” (“Can anybody find me somebody to love?”) became a harmonized howl of shared forlornness.

Near the end of the program the rocking “Some Nights” by fun. turned to self-reflection (“What do I stand for? / What do I stand for?”). And John Farnham’s “You’re the Voice,” accompanied by a mournful bagpipe, included an eerily resonant lyric:

The choir closed with a traditional Irish tune, “The Parting Glass,” which ended on this note: “Good night and joy be with you all.” Indeed that was the sentiment that had been thrillingly instilled in us all. But beyond that joy, there had appeared a kind of hope: a vision of men in harmony instead of conflict, of men behaving gladly instead of badly—of dudes in tune, with their feelings as well as with ours. 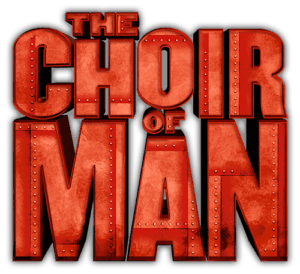 The Choir of Man plays only November 23, 24, and 25, 2018, in the Terrace Theater at the John F. Kennedy Center for the Performing Arts – 2700 F St. NW in Washington, D.C. For tickets, call the Box Office at (202) 467-4600 or order them online. The Choir of Man Original Cast album of gorgeous covers is for sale on iTunes and can be streamed on Apple Music and Spotify.