Making a soul-stirring Broadway debut with the Manhattan Theatre Club after its Off-Broadway premiere with MTC in 2013, Tarell Alvin McCraney’s revised Choir Boy has already extended its limited engagement at the Samuel J. Friedman Theatre, and righteously so. Flowing with the unsurpassed eloquence and empathy that define the award-winning playwright’s exquisite style, the coming-of-age play with music is once again directed by Trip Cullman, with an engrossing balance of vibrancy and poignancy, humor and heartbreak, as one gifted gay student is confronted with inexorable socio-economic issues of sexuality, class, race, and ethics, while attending a prestigious boarding school for young men of color.

Set at the fictional Charles R. Drew Prep School in the academic year preceding its 50th anniversary, the narrative examines the inter-relationships and conflicts among the students in the institution’s revered gospel choir, and the responses of the Headmaster and an esteemed member of the faculty to the behavior of their charges. Jeremy Pope, who stars as the talented, flamboyant, and embattled protagonist and choir leader Pharus Jonathan Young, turns in an affecting multi-dimensional performance that hits all the right notes, as he struggles to attain his goals, to retain his self-confidence, to honor his and his school’s moral code, and to remain true to himself. J. Quinton Johnson is featured as Pharus’s chief antagonist Bobby Marrow, an angry homophobic bully who taunts and challenges him, while dealing with disturbing personal issues of his own, but holding the upper hand as a legacy student and the Headmaster’s nephew (the high-achieving Pharus is there on a scholarship).

The supporting cast turns in equally engaging performances with distinctive characterizations, from Chuck Cooper’s affable but ultimately biased Headmaster Marrow to Austin Pendleton’s eccentric teacher Mr. Pendleton (a white man with an active history in the Civil Rights Movement), who is sometimes shaken by the students’ antipathy and their use of the n-word (though he makes a racially-charged “joke” about being late to class). Rounding out the impressive ensemble are Nicholas L. Ashe as Junior Davis, who soon switches his allegiance from Bobby to Pharus; John Clay III as AJ James, Pharus’s sensitive and sympathetic roommate; and Caleb Eberhardt as David Heard, who harbors some deep secrets that lead to the play’s dramatic climax.

The stellar cast’s compelling portrayals are enriched with soaring a cappella vocals (music direction, arrangements, and original music by Jason Michael Webb) and animated movement (choreography by Camille A. Brown; fight direction by Thomas Schall) that express the characters’ deeply felt emotions (as embodied in the gospel lyrics they sing and encouraged in Pendleton’s Creative Thinking course); segments of phone calls to home that elucidate their family situations and backgrounds; and discreet locker-room nudity (with subtle lighting by Peter Kaczorowski), which serves to heighten the sexual tension that is central to the story. David Zinn’s smart and efficient scenic design easily transitions from classroom, to locker room, to dorm room, and his costumes capture the elite school’s tradition of tasteful uniforms, complemented by Cookie Jordan’s well-groomed hairstyles, all providing a telling contrast to the inner turmoil that lies beneath the surface polish

MTC’s outstanding production of Choir Boy reaffirms Tarell Alvin McCraney’s position as one of the most profoundly moving and insightful writers of our time. Don’t miss it.

Running Time: Approximately one hour and 45 minutes, without intermission. 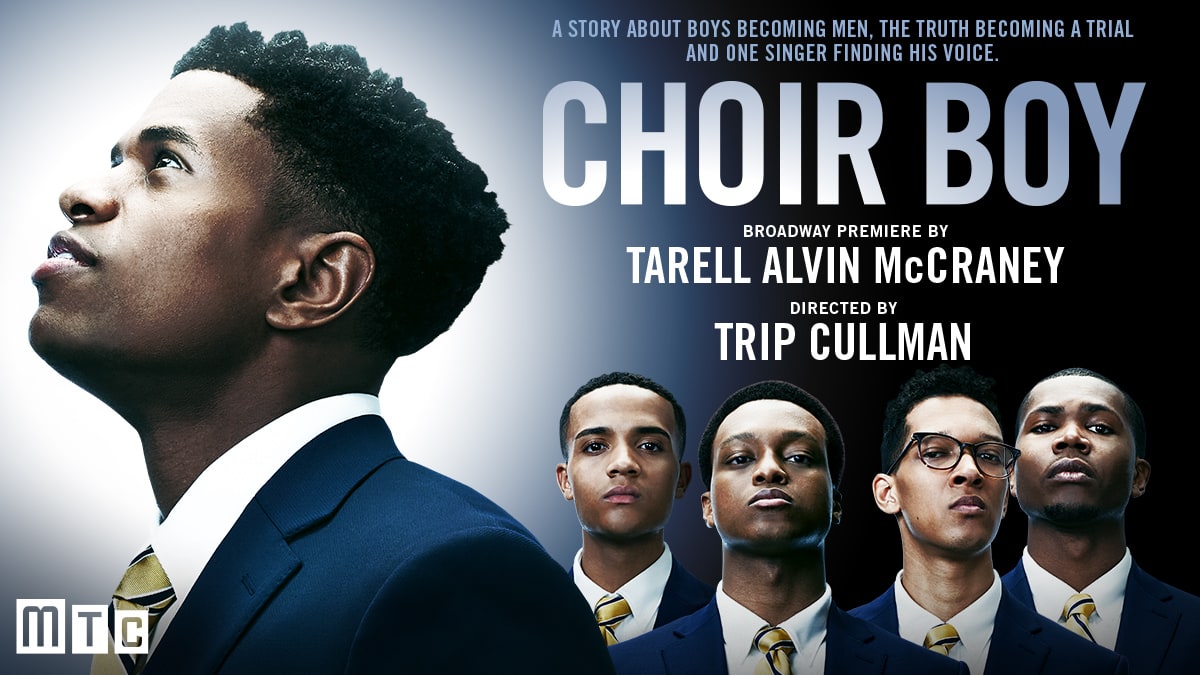