Many plays try to capture the complexity of the human spirit and the Reston Community Players production of Donald Margulies’, Time Stands Still, does just that. The poignant tale examines an individual’s desire to find purpose and make a difference in the world, and the sometimes-difficult battle between fighting for a cause and basic human comfort. The play touches on the importance of love and the many forms love can take.

Adam Konowe does a beautiful job directing this evocative story of two journalists, recently returned from an assignment in Iraq. The couple struggles to make peace with their own pain and guilt, as well as each other.

As the show begins, James Dodd (Greg Lang) is helping his long-time girlfriend Sarah Goodwin (Jane Steffen) through the door of their loft in Brooklyn. She is returning home after a long hospital stay, recovering from injuries she incurred while working as a photo-journalist in a war zone in the Middle East. Sarah is using a crutch, with one leg fully braced, which makes her movement slow and deliberate, and her face is scarred and raw from shrapnel wounds.

We learn that James, who was originally working with Sarah as a reporter overseas, had an emotional breakdown as a result of the war and carnage and returned home, leaving Sarah to stay and finish their work. It was shortly after his departure that Sarah was injured. The tremendous guilt he feels wrecks his sleep and amplifies his desire to care for and protect Sarah. A beautiful sentiment, but Sarah is determined and dead-set on returning to the war zone as soon as she is recovered.

Lang and Steffen play a couple on the outside of their own relationship, trying to find a way back in. They have both suffered physically and emotionally and, while trying to put themselves back together, are struggling with the new reality this creates for them as a couple.

After being home a short while, the couple is visited by long-friend and editor, Richard Ehrlich (Todd Huse), accompanied by his new (half his age) girlfriend Mandy Bloom (Alex Sands). The immediate and striking contrast to the two couples is enough to make the encounter uncomfortable. But add to that Mandy’s complete naiveté of the nature, let alone the impetus, of the work Sarah and James do makes the visit painfully awkward.

Yet, Sands’ Mandy is like a breath of fresh air through the heaviness and pain that had been the focal point of the play so far. And while James and Sarah initially treat her with poorly veiled condescension, being that she is untraveled, unworldly, young, and (worst of all) an event planner, Mandy eventually endears herself with her genuine spirit and self-awareness.

Mandy offers surprising nuggets of insight, questioning why a person wouldn’t help the people suffering in the Middle East, instead of taking their picture. And upon Sarah’s mention of needing to get back the war zone, Mandy asks, “I wish you’d just let yourselves feel joy. Y’know? Otherwise, …what’s the point?”

On the surface, Mandy and Richard are the unlikely couple, but Huse exudes Ehrlich’s passion and excitement for the younger woman, admiring how simple and uncomplicated loving her is. It’s a switch from the worry, stress, and deadlines of working for a major magazine, which deals in the topics of war and social injustices.

The play contains a lot of exposition, which is vital to understanding the conflict between James and Sarah and to caring about what happens to them. They are both battling their extreme guilt and reliving painful memories over and over in their minds. But because of this, there isn’t a lot of “action” in the play. Instead, there are in-depth conversations and many moments of conflict and reflection. The actors do a wonderful job living in these moments and creating the energy and intensity to keep the show moving and bursting with emotion.

Lang is great in the heated moments when James and Sarah are recounting emotional experiences to each other. His guilt for leaving Sarah there alone, and his twisted sense of relief when he learns that circumstances in Iraq may allow him a chance to be there for Sarah and “win” her again.

But aside from the relationship dynamics, is the broader question of making a difference. At her core, Sarah believes that her work is necessary to inform the world about the atrocities happening to those who have no voice of their own. But her confidence is shaken by another experience, before the accident, when a woman covered with smoke, burns, and blood is yelling at Sarah to go away from a scene. “They didn’t want me there,” Sarah cries out as she describes the woman’s blood on her lens as she continued to shoot.

In this scene, Steffen brings all the pain, frustration, and fury that Sarah feels. She does not know if her photojournalism does any good. But she can’t walk away. She feels that it is her duty. Which is in sharp contrast to James, who believes in the good of his work but also believes that it’s his turn to be comfortable and enjoy life with Sarah.

And that is the fundamental question that the play is asking. What is right? What is moral? Do those who make sacrifices of their personal life for a cause miss-out on having their own experiences and comfort? And is it worth it? Does their sacrifice bring about change?

Unfortunately, there is never a simple answer but Time Stands Still represents the literal and figurative interpretations of the expression. A photograph captures a moment in time. The real world never stops, but that image is forever still.

Reston Community Players production of Time Stands Still is a beautiful provocative piece of theatre. The conversation topics that the play evokes are endless and the material itself is expertly done. Congratulations to the cast and crew of RCP for creating a truly moving and thought-provoking piece of art. 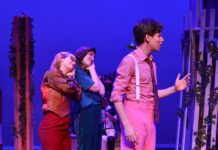