Hexagon has been around for 64 years and never seems to age. Since 1956 the musical comedy theater group has been turning out original political satire that’s as of-the-moment as the news. Its latest is Romp in the Swamp, a two-act music-and-sketch review that skewers morsels of modern mores like a red-hot kabob stick: politics in the time of Trump, of course, but peculiarities of pop culture too.

A cartoonscape of the Capitol submerged in slime spreads across the stage, because the futurist joke threading through the show is that the swamp that is DC never drained; it got swampier. Climate change has kicked in (“The President has declared air conditioning a hoax”), so “from sea to shining sea there’s nothing in between.”

A team of intrepid archeologists arrives to dredge up what life was like in 2019. In the opening number (“Romp in the Swamp”), the stage fills with singing and dancing archeologists and swamp creatures:

No one can explain it,
People came to drain it
And clean out all the muck here,
Somehow they all got stuck here.

There’s a winsome let’s-put-on-a-show vibe, and the performers and creative team are all big-hearted volunteers—Hexagon’s box office always benefits a charity—but the writing is biting, the tunes are inviting, and there’s more than enough fun here to make for an enjoyable evening of making fun.

For instance, there’s a scene in which the archeologists discover a strange bushel-basket-size mound of yellow fiber worn as a headdress by Susan Dye—in whose operatic soprano voice we hear an ode to Trump’s “Hair.”

Trump himself appears in an amusing impersonation by Matthew Ratz in several scenes. There’s a production number complete with backup singers and dancers in which he fondles and extols a model of the new Air Force One, which has been repainted to say “United States of TRUMP.”

There’s a sketch in which Trump complains to Sarah Huckabee Sanders (Cristen Stefansky) that he doesn’t have his own signature song. He runs through a list of song titles he’d like, but all they’re off limits, she tells him, because “Cease and desist.” Finally, she offers one he can have: “You’re So Vain.”

A highlight of the evening is a musical number called “Rocket Man,” with gold-jacketed backup singers and Elvis-ish garb for Trump, in which his infatuation with foreign dictators gets a hilariously bromantic spin (“Feel the love…!”).

Jackie Williams has two show-stopping solo turns: as Stormy Daniels in a number called “Stormy” and as Michelle Obama in “Becoming/Kick.”

And the #MeToo movement gets a wicked Golden Girls twist in a sketch and number called “Bolden Girls”/”Keep It in Your Pants” with Rose (Susan Dye) Sophia (Ellen Kaplan), Dorothy (Kathleen Reilly), and Blanche (Karen Pedone). Turns out Blanche’s hookup with the Pizza Delivery Boy (Alex Diaz-Ferguson) has precipitated a visit from the Process Server (Joe Kaplan) charging her with sexual harassment. She thought the hashtag #MeToo meant “pound me too.”

The target range for the show’s political spoofing is a broad one. Staff turnover in the White House comes under ridicule (“Revolving Door”). Trump’s border wall emergency gets flipped—here it’s Mexico building a wall and policing its country against American tourists (“The Mexican Border Song”). Political correctness gets a sendup when a popular new liberal-progressive candidate (Susan Dye), who is perfect on all the issues, suddenly incurs the wrath of her followers because she is spotted using a plastic straw (“The Last Straw”). There’s lots more—some with sharper focus than others but with plenty whose aim is right on.

With equal cheek, Act Two takes on a wide assortment of cultural topics including online dating and dirty-pic sexting (Jennifer Strand as a single senior in the classic “Mr. Whiskers,” which I saw last summer when I reviewed Hexagon’s Fringe show) and the Sisyphean Metro system (“Back2Good, the best they can do”).

At four intervals during the show, two legit-seeming TV news anchors sit at a desk stage right, as if on camera, for a howlingly funny joke-set called “Newsbreak.” Their edgy material and their dry delivery was on a par with SNL‘s “Weekend Update.”*

Given that the show played on a high school auditorium stage, the dramatic lighting effects from song to song were noteworthy. Mostly the wireless mics worked, and the small orchestra off left served the singing well. Most remarkable was the invention in the array of costumes. In scene after scene, whole chorus lines would come on in flashy new looks, and the nonhuman characters (birds and other creatures) were accordingly decked out cleverly.

For the finale, the full company—women in sparkling silver tops and black skirts, the men in white tie and black tux—sang a movingly patriotic chorale called “This Is Us” (“We can be a better nation if we remember who we are”).

This entire intrepid troupe has gone to the swamp and seen what’s there and cracked us up. So when at last they stand stirringly on America’s higher ground, it is an upbeat ending well earned and much needed.

Running Time: About two hours 45 minutes, including one intermission.

Hexagon: Romp in the Swamp plays through April 6, 2019,  at Woodrow Wilson High School, 3950 Chesapeake St NW, Washington, DC, in the Tenleytown neighborhood. Tickets are available online or by calling 202-333-7469. 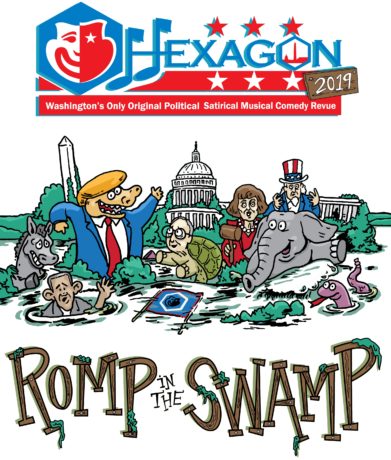